1 The Road to the Constitution

4 Strengthening the National Government
1787 Problems with the Articles of Confederation States sent delegates to Philadelphia to fix the A.O.C. Rhode Island did not go…they did not want a stronger central government

6 Who was there? Who missed it?
Benjamin Franklin 81, oldest delegate George Washington & James Madison Both would become president Thomas Jefferson & John Both were in Europe Patrick Henry Prominent Virginian He was invited but did not attend; he was against the convention

7 The Boss Who was chosen to preside over the convention?
George Washington Respected for his leadership during the Rev. War

8 Procedures of the Convention
Each state was only allowed one vote Majority votes from all states made decisions All discussions were a secret! Why…? This way, delegates could speak freely, without worry about how the public would react

10 What happened to the… Articles of Confederation???
The throw it away, decided to write a new constitution

15 The Great Compromise What is a compromise???
Roger Sherman of Connecticut comes up with the answer…a compromise Lower House House of Representatives Determined by population 2 year terms Favored larger states Upper House Senate Equal representation 6 year terms Favored smaller states Also known as… The Connecticut Compromise What is a compromise??? A way of resolving disagreements in which each side gives up something but gains something else

17 More arguing? What now? Controversy over counting slaves as a part of the population… At this time, there were 550,000 enslaved African Americans, mostly in the South

20 Another compromise How to elect a president?
Some say… “Let Congress pick!” Others say… “Let the people choose!” The compromise…

21 Electoral College A group of people would be chosen by each state to choose the President Each state given a certain number of votes, determined by their representation in Congress

22 One last compromise Conflicts over commerce & the slave trade
Congress could regulate (control) trade between states & other countries However, they could NOT tax exports or interfere with the slave trade for 20 years

24 Finished…finally! September 17, 1787, finished up the Constitution
Delegates signed it, said the Constitution would become the law of the land when… 9 out of 13 states ratified (approved) it

25 So everyone in the entire United States of America loved the Constitution and every state ratified it immediately and we all had a big party and we all lived happily ever after, right…?

27 A Divided Public Some people liked the Constitution, others did not
Federalists = supporters of the new constitution & a strong federal government Federalism = A form of government in which power is divided between the federal (national) government and the states

28 A Divided Public Some Federalists wrote papers to rally support for the Constitution They were called the Federalist Papers (duh) Who wrote ‘em? Alexander Hamilton, James Madison, & John Jay

29 A Divided Public What about those who didn’t like the Constitution?
Anti-Federalists = People opposed to the constitution & a strong federal government “Don’t forget individual rights!”

30 Reaching an Agreement Anti-Federalists wanted to add…
The Bill of Rights The Federalists promised to do so, and did New Hampshire, 9th state to ratify June 21, 1788 The Constitution went into effect The last state to ratify…? Rhode Island, 1790

33 Founding Fathers The Framers of the Constitution wrote a very generalized document. Purpose? To allow future Americans flexibility. Look at Article I, Section 8, Clause 18 of the U.S. Constitution on page 170 on the textbook. Read it carefully. The nick name of this passage is the Elastic Clause. Can you tell why?

34 Competing interpretations
Who interprets? The Supreme Court! How? Strict or literalist Which Means? The Constitution means exactly what it says! Framers had an exact plan 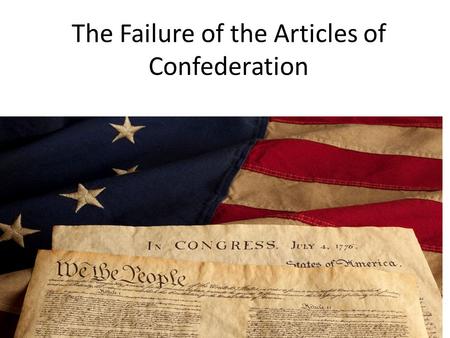 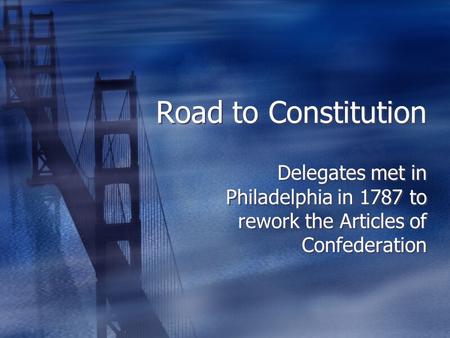 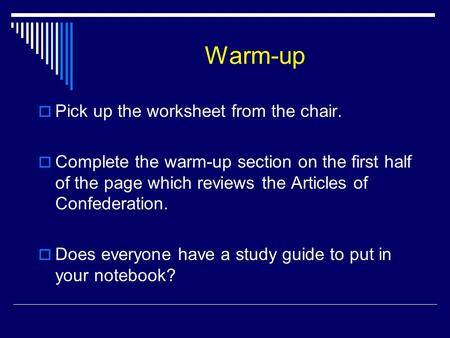 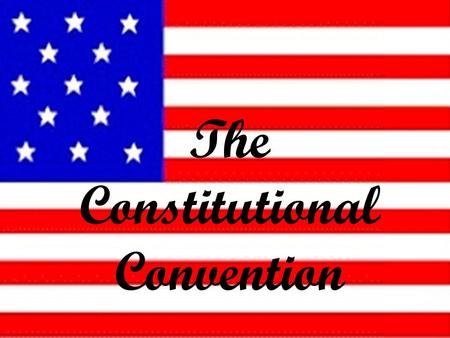