Presentation on theme: "TITLE The Development of Atomic Theory. Early Ideas Democritus—Greece 400 B.C. His idea:  There was a limit to how far you could divide matter. You would."— Presentation transcript:

1 TITLE The Development of Atomic Theory

2 Early Ideas Democritus—Greece 400 B.C. His idea:  There was a limit to how far you could divide matter. You would eventually end up with a piece of matter that could not be cut.  Called particles atoms--Greek for “indivisible”

3 His theory:  all atoms are small hard particles  made of a single material formed into different shapes and sizes  always moving, and that they form different materials by joining together

4 Early Ideas Aristotle--Greece 384- 322 B.C. –All matter was continuous, that matter could be divided into smaller and smaller pieces forever — did not believe in atoms –Opinion accepted for 2000 years

5 John Dalton 1803 He performed many experiments to study how elements join together to form new substances. He found that they combine in specific ratios and he supposed it was because the elements are made of atoms. 2000 Years Later

9 His theory:  negatively charged particles called electrons and positively charged matter  created a model to describe the atom as a sphere filled with positive matter with negative particles mixed in  referred to it as the plum pudding model

10 He proposed the atom was a sphere of positively charged material. Spread throughout the atom were the negatively charged electrons similar to plums in a pudding or chocolate chips in ice cream. His ideas

12 Ernest Rutherford 1911 New Zealand physicist discovered the nucleus Was a student of J.J. Thomson but disagreed with the “Plum Pudding Model” Devised an experiment to investigate the structure of positive and negative charges in the atom.

16  most of the matter of the atom is found in a very small part of the atom. This is called the nucleus of the atom. It is very tiny and extremely dense

17 Niels Bohr 1913  Danish physicist discovered energy levels  proposed that electrons move in paths at certain distances around the nucleus.  Electrons can jump from a path on one level to a path on another level

Download ppt "TITLE The Development of Atomic Theory. Early Ideas Democritus—Greece 400 B.C. His idea:  There was a limit to how far you could divide matter. You would." 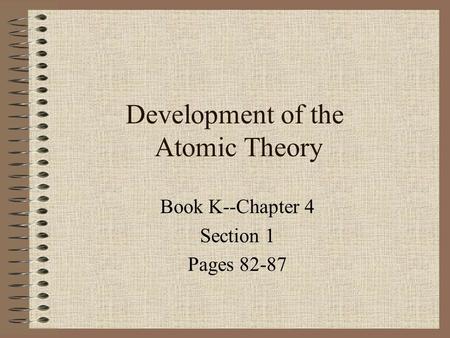 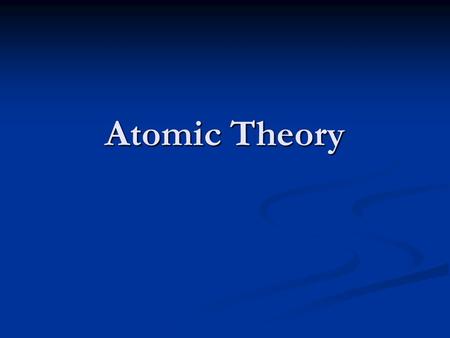