Get ready to write and think

2 Structure and form Form: a poem’s shape; the way it is laid out on the page Line: main unit of a poem; does not have to be complete sentence Stanzas: in some poems, lines are arranged in groups, called stanzas. Form may follow a fixed rules (traditional), or have no regular pattern of rhyme (free verse).

3 Sound devices Rhyme: matching final sounds (Rhyme scheme)
Internal rhyme: rhyme between words within a line Rhythm: pattern of stressed and unstressed syllables in each line Repetition: the use of a word, phrase, or line more than once Alliteration: repeating beginning sounds

6 Two Sunflowers Move in the Yellow Room
"Ah, William, we're weary of weather," said the sunflowers, shining with dew. "Our traveling habits have tired us. Can you give us a room with a view?" They arranged themselves at the window and counted the steps of the sun, and they both took root in the carpet where the topaz tortoises run. William Blake ( )

7 The Cat & The Fiddle Hey diddle, Diddle, The cat and the fiddle, The cow jumped over the moon; The little dog laughed To see such sport, And the dish ran away with the spoon. By Mother Goose

8 Haiku Haiku is a poetic form that originated
in Japan hundreds of years ago and continues today. Haiku combines form, content and language in a meaningful, yet compact form. Haiku poets write about everyday things.

9 Haiku 2 In order to be true haiku, a poem must consist of 17 syllables and contain a kigo. A kigo is a word that hints at what season the poem takes place. Many haiku themes include nature, feelings or experiences. Usually they use simple words and grammar. The most common form for Haiku is three short lines. The first line usually contains five syllables, the second line seven syllables, and the third line contains five syllables. Haiku doesn’t rhyme.

10 Haiku 3 A Haiku must “paint” a mental image in the readers mind. Haiku comes from the long, long history of Japanese literature. Japanese literature is one of the world’s oldest and greatest literatures. It reflects many characteristics of the Japanese people, such as their appreciation of tradition and their sensitivity to nature.

11 Cinquain Animal Cinquain Cinquain format (non-rhyming):
Line 1: One word (subject or noun) Line 2: Two words (adjectives) that describe line 1 Line 3: Three words (action verbs ending with "-ing") that relate to line 1 Line 4: Four or five words (feelings or a complete sentence) that describe the subject or are related to it in some way Line 5: One word that sums up line 1 or is a synonym of line 1

14 And last things Allusion: reference to something with which the reader is familiar. “Alice” by Shel Silverstein refers to Alice in Wonderland Diction: a writer’s choice of words to convey a certain emotion or feeling Hyperbole: exaggeration 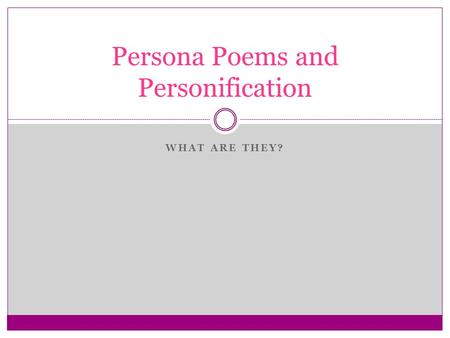 WHAT ARE THEY? Persona Poems and Personification. 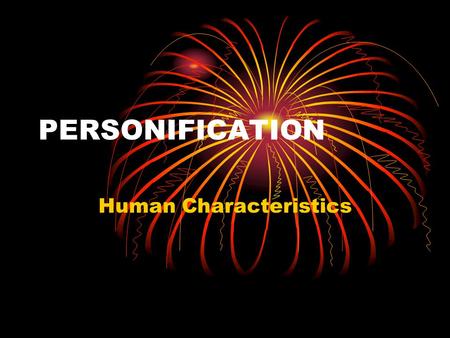 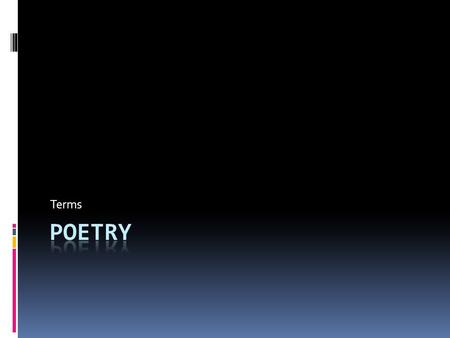