6 Migration and Circulation
Migration is a form of mobility, which is a more general term covering all types of movements from one place to another. Short-term, repetitive, movements that recur on a regular basis, such as daily, monthly, or annually, are called circulation

7 Here’s a Good Question that relates to Migration in the 21st Century
If people can participate in the globalization of culture and economy regardless of place of residence, why do they still migrate in large numbers? The answer is that place is still important to an individual cultural identity and economic prospects.

9 Ravenstein’s Laws Geography has no comprehensive theory of migration, although a nineteenth-century essay of 11 migration “laws” written by E. G. Ravenstein is the basis for contemporary migration studies. Ravenstein’s “laws” can be organized into three groups: reasons distance migrant characteristics

10 Global Migration Patterns
Most people migrate for economic reasons. Cultural and environmental factors also induce migration, although not as frequently as economic factors.

13 Economic Push and Pull Factors
Most people migrate for economic reasons. The relative attractiveness of a region can shift with economic change.

15 Twentieth Century Instability
In the twentieth century, forced international migration increased because of political instability resulting from cultural diversity. Refugees are people who have been forced to migrate from their home country and cannot return for fear of persecution. Political conditions can also operate as pull factors, especially the lure of freedom. With the election of democratic governments in Eastern Europe during the 1990s, Western Europe’s political pull has disappeared as a migration factor. However, Western Europe pulls an increasing number of migrants from Eastern Europe for economic reasons.

16 Environmental Push and Pull Factors
People also migrate for environmental reasons, pulled toward physically attractive regions and pushed from hazardous ones. Attractive environments for migrants include mountains, seasides, and warm climates. Migrants are also pushed from their homes by adverse physical conditions. Water—either too much or too little—poses the most common environmental threat.

18 Distance Traveled Ravenstein’s theories made two main points about the distance that migrants travel to their home: Most migrants relocate a short distance and remain within the same country. Long-distance migrants to other countries head for major centers of economic activity.

21 Connections to Demographic Transition
Geographer Wilber Zelinsky has identified a migration transition, which consists of changes in a society comparable to those in the demographic transition. A society in stage 1, Unlikely to migrate permanently. Does have high daily or seasonal mobility in search of food. According to migration transition theory, societies in stages 3 and 4 are the destinations of the international migrants leaving the stage 2 countries in search of economic opportunities. Internal migration within countries in stages 3 and 4 of the demographic transition is intraregional, from cities to surrounding suburbs.

22 Characteristics of Migrants
Ravenstein noted distinctive gender and family-status patterns in his migration theories: Most long- distance migrants have historically been male Most long-distance migrants have historically been adult individuals rather than families with children. Changes in Gender of Migrants But since the 1990s the gender pattern has reversed, and women now constitute about 55 percent of U.S. immigration.

23 Family Status of Migrants
Ravenstein also believed that most long-distance migrants were young adults seeking work. For the most part, this pattern continues for the United States. With the increase in women migrating. . . more children are coming with their mother 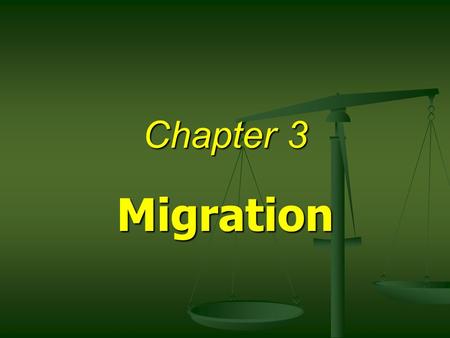 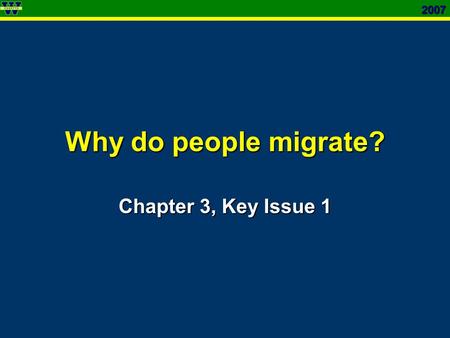 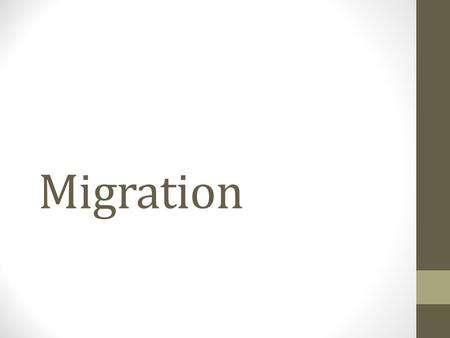