2 Classify Governments No two governments are exactly alike because governments are the products of human needs and experiences. Over time, political scientists have developed many bases upon which to classify governments. There are three classifications.

3 The first classification is who can participate in the governing process.
The second is the geographic distribution of the governmental power within the state. The third is the relationship between the legislative and the executive branches of the government.

4 There are two basic forms of government to consider.
Democracies Dictatorships

5 Democracy In a democracy the supreme political authority rests with the people. The people hold the sovereign power, and the government is conducted only by and with the consent of the people. A democracy can either be direct or indirect in form.

6 This is possible in small communities.
A direct democracy exists where the will of the people is translated into law, or public policy, directly by the people themselves in mass meetings. A direct democracy is also known was a pure democracy. This is possible in small communities. This does not exist at the national level anywhere today.

7 Americans are more familiar with the indirect form of democracy with a representative democracy.
A small group of people are chosen by the people to act as their representative. The representatives are responsible for carrying out day-to-day conduct of government. Making and executing the laws.

8 They are held accountable to the people for their conduct.
During elections, the people have the opportunity to express their approval or disapproval of their representatives by casting ballots for or against them. The government has the consent of the governed.

9 Many Americans use the terms democracy, republic, representative democracy, and republican form of government interchangeably even though they are not the same thing. Whatever the term used, remember that in a democracy the people are sovereign.

10 Dictatorship A dictatorship exists where those who rule cannot be help responsible to the will of the people. The government is not accountable for its policies, nor for how they are carried out. It is most likely the oldest and most common form of government.

13 Today dictatorships often present the outward appearance of control by the people.
The people often vote, but the vote is closely controlled, and ballots usually contain the candidates of but one political party. Typically, dictatorial regimes are militaristic in character and usually gain power by force.

14 Geographic Distribution of Power
In every system of government the power to govern is located in one or more places, geographically. There are three basic forms of government that exist: Unitary Federal Confederate

15 Unitary Government It is a centralized government.
All powers held by the government belong to a single, central agency. Most governments in the world are unitary in form. Ex: Great Britain. A single central organization, the Parliament, holds all of the government’s power.

18 They have not had the power to make laws that apply directly to individuals.
This structure makes it possible for the several state to cooperate in matters of common concern and still keep their separate identities. Really, the only confederation that is around today is the European Union. 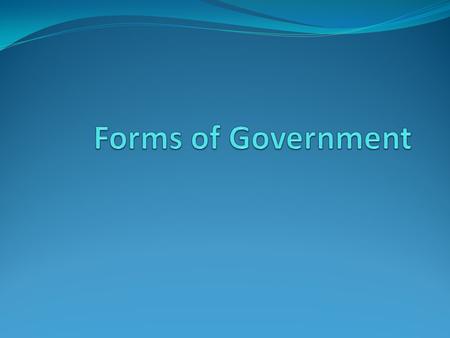