6 Systems and Types of Government
In order to study government, we first need to look at the following: Systems: How is the Power distributed Types: Who rules and who participates

7 Systems of government are based on one question…
…How is the power distributed? There are three ways governments distribute power: Unitary Confederation Federal

8 Unitary One central government controls everything
Power is NOT shared between states, counties, or provinces. Examples: The United Kingdom, France, the Netherlands, and Spain

11 Federal Power is shared by a central government
States or Provinces are given considerable self-rule, usually through their own legislatures. Examples, the United States and Germany

16 Autocracy Government in which the power to govern is held by one person Generally the power to rule is inherited or by military force There are three types of autocracy Example: Iraq, and Great Britain Dictatorship- absolute rule generally by force Absolute Monarchy-absolute rule inherited through family ties Constitutional Monarchy-share power with elected officials, seen for as figurehead with limited to no power

17 Oligarchy A government in which a few people such as a dominate clan or clique hold all the power The group gets their power through either military, wealth, or social status Elections may be held but offer only one candidate Examples: Greek-City states, Russian Federation.

20 Two Major Types of Democratic Governments
Parliamentary Presidential Voters elect members to Parliament House of Commons-the Political Party with the most votes in the House of Commons chooses the Prime Minister, the government’s leader with no set length of term House of Lords: little power with most members being nobles having inherited their titles Voters elect legislatures Voter elect (indirectly) the president Therefore, in the presidential system voters have a more direct say about those who serve in two branches of the government Legislative Executive 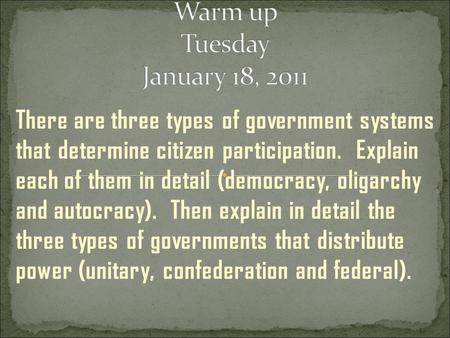 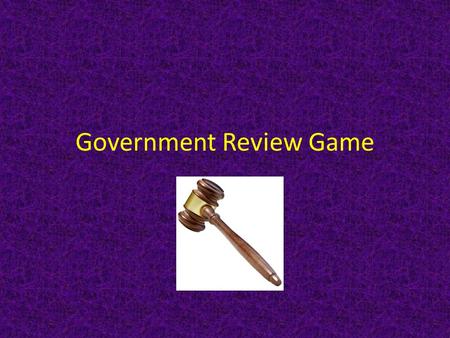