4 Distance… length of a path between two points When an object moves in a straight line, the distance is the length of the line connecting the object’s starting point and its ending point.

5 Measuring Distance The SI unit for measuring distance is the meter (m). For very large distances, it is more common to make measurements in kilometers (km). Distances that are smaller than a meter are measured in centimeters (cm).

7 Distance vs Displacement How are distance and displacement different? – Distance=length – Displacement=direction and the length

10 Speed -The ratio of the distance an object moves to the amount of time the object moves. -The SI unit of speed is meters per second (m/s). -Two ways to express the speed of an object are average speed and instantaneous speed.

13 Average Speed Average speed, is the total distance traveled, d, divided by the time, t, it takes to travel that distance.

14 Instantaneous Speed -Instantaneous speed, v, is the rate at which an object is moving at a given moment in time. -The speedometer in a car measures the car’s instantaneous speed. -Note the scale markings are given both in km/h and miles per hour, mph.

19 Velocity Velocity is a description of BOTH speed and direction of motion. The unit for velocity is meters per second.

20 Practice A football field is about 100 m long. If it takes 20 seconds to run its length, how fast (what speed) were they running?

21 Practice The pitcher’s mound in baseball is 85 m from the plate. It takes 4 seconds for a pitch to reach the plate. How fast is the pitch?

24 Practice If a delivery truck drives 537 miles in 7 hours, how fast was he driving?

26 Velocity Velocity is a description of BOTH speed and direction of motion. The unit for velocity is meters per second.

27 What is acceleration? The rate at which velocity changes. In science, acceleration applies to any change in an object’s velocity.

29 Free Fall Free fall is the movement of an object toward Earth solely because of gravity. Objects falling near Earth’s surface accelerate downward at a rate of 9.8 m/s 2. Each second an object is in free fall, its velocity increases downward by 9.8 meters per second.

33 Practice A parachute on a racing dragster opens and changes the speed of the car from 85 m/s to 45 m/s in a period of 4.5 seconds. What is the acceleration of the dragster?

34 Practice A car traveling at a speed of 30.0 m/s encounters an emergency and comes to a complete stop. How much time will it take for the car to stop if it decelerates at -4.0 m/s 2 ?

35 Practice A helicopter’s speed increases from 25 m/s to 60 m/s in 5 seconds. What is the acceleration of this helicopter?

36 Practice After traveling for 6.0 seconds, a runner reaches a speed of 10 m/s. What is the runner’s acceleration? 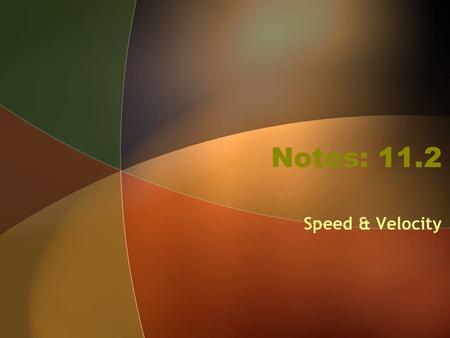 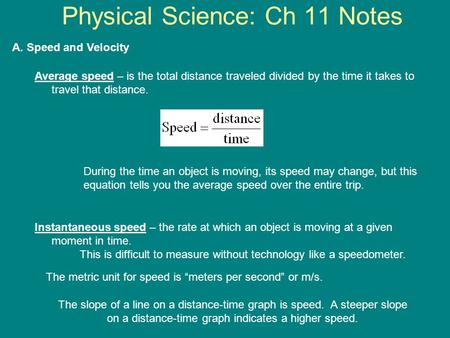 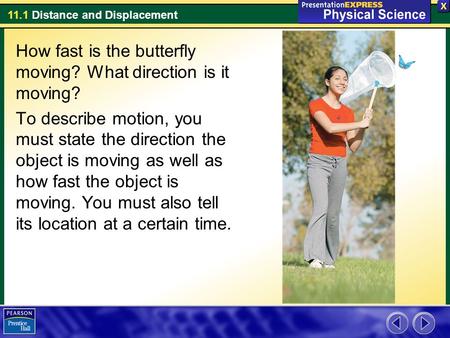 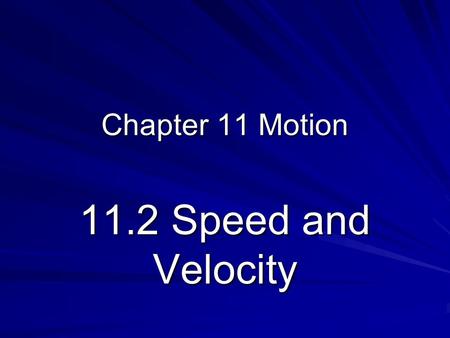 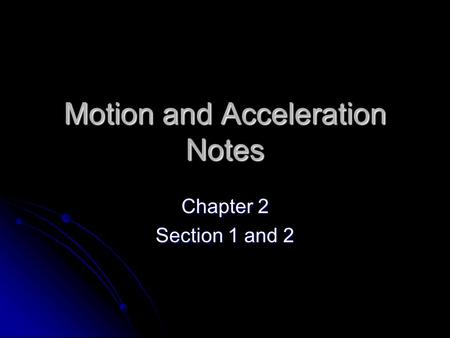