3 7.1 – The Nominating Process  1st Step: Nomination – the naming of those who will seek office  5 Ways to Nominate 1. Self-Announcement – oldest form of the nominating process in American politics.  Example: Ross Perot (1992)

4 The Nomination Process 2. Caucus – a group of like-minded people who meet to select the candidates they will support in an upcoming election.  Past: private meeting consisting of a few influential figures in the community  Present: open to all members of a party 3. Convention – party members meet on the local level  then, county level  then, state level  then, national level

7 Elections Early Voting: casting ballots over a period of several days before the election (not absentee)  Texas is the most liberal on this issue. You can cast your vote up to 17 days before a primary or presidential election

8 Elections  Coattail Effect: occurs when a strong candidate running for an office at the top of the ballot helps attract voters to other candidates on the party’s ticket. Referred to as “riding the coattails.”  Voting Machines and Innovations  Electronic Vote Counting  Vote-by-Mail Elections  Online Voting

9 7.3 – Money & Elections  Campaign Spending  In 2000, the total presidential campaign spending came to $1.5 billion  Imagine…bumper stickers, buttons, mass mailings, websites, travel, etc.  Television advertisements are the costliest of all items - $150,000-$500,000 for one T.V. Spot  The biggest drawback of the need for large amounts of money to campaign is that people who cannot raise the money are denied a chance to be elected. 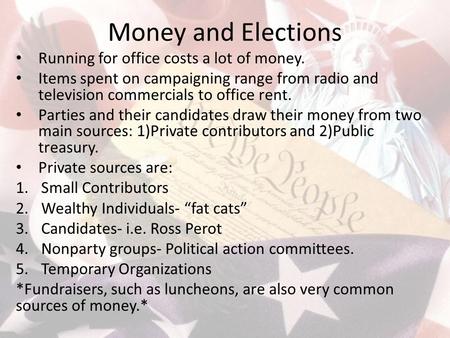