6 EMI INFSO-RI-261611 Primary Objectives Consolidate the existing middleware distribution simplifying services and components to make them more sustainable (including use of off-the-shelf and commercial components whenever possible) Evolve the middleware services/functionality following the requirement of infrastructure and communities, mainly focusing on operational, standardization and interoperability aspects Reactively and proactively maintain the middleware distribution to keep it in line with the growing infrastructure usage Ljubljana, NorduGrid 2010 6 Consolidate Evolve Support 04/05/2010

10 EMI INFSO-RI-261611 Increased Usability One of the major complaints of research users about the middleware is about its limited “userfriendliness” – Deployment, configuration, service management, interoperability, security mechanisms, flexibility, etc. Unnecessary duplication of services and libraries User requirements (ESFRI, VRCs) – EMI is requirement driven and will actively participate to the definition of user requirements with the major user communities and infrastructures 04/05/2010 Ljubljana, NorduGrid 2010 10

11 EMI INFSO-RI-261611 Security One of the most important and most difficult aspects of the middleware – Usability: existing certificate-based technologies are needed, but too complex to manage or use for the typical user or not easy to integrate in existing security contexts – Reliability: the increasing use of distributed computing and the handling of sensitive data require reliable and auditable security methods – Interoperability: the chosen methods must be common across all services and implementations 04/05/2010 Ljubljana, NorduGrid 2010 11

12 EMI INFSO-RI-261611 Standardization Very important to address a number of existing limitations – Interoperability, integration, extensibility and evolution, commercial usage All services must: – Implement the ‘best’ relevant standards – Implement them in the same way ‘Best’ means: – A ‘community’ standard, if it is useful, usable or can be realistically improved – A ‘de facto’ standard, if no community standard exists or what exists is clearly not usable Ljubljana, NorduGrid 2010 1204/05/2010

15 EMI INFSO-RI-261611 Integration with New Technologies Technology evolves continually Distributed computing middleware must be able to capitalize on past achievements, but also learn from past lessons and become increasingly efficient and flexible Using labels like Grids or Clouds is misleading How can existing stable, reliable and secure services be made more elastic, dynamic, efficient? And again, standards are very important 04/05/2010 Ljubljana, NorduGrid 2010 15

16 EMI INFSO-RI-261611 Innovation Ljubljana, NorduGrid 2010 16 Innovation is a key driver behind EMI New services or functionality are introduced as needed based on: New user requirements Need to evolve existing services or replace older technologies to support the growing infrastructures Special focus on integration of virtualization, monitoring interfaces, messaging, support for portals and gateways Stability of the existing infrastructure operations must be guaranteed Agreed migration timelines and paths 04/05/2010

17 EMI INFSO-RI-261611 Industrial Relationships The sustainability process relies on increased adoption by commercial companies EMI has an ‘industrial plan’ made of two important points: – Work with commercial partners to transfer and integrate technology in both directions – Understand with commercial experts what is the market, the realistic targets and the sustainable business models 04/05/2010 Ljubljana, NorduGrid 2010 17

22 EMI INFSO-RI-261611 Software Engineering Process EMI Software Engineering Process is based on best practices: ITIL and COBIT provide a proven foundation for Release, Change, Problem Management, Quality Assurance and Continual Improvement The concept of Product Team is used to clearly allocate tasks and responsibility Each PT is responsible for one or more products from design to after- release user support, including testing and certification Each PT has a Leader responsible for the planning and execution of the tasks delegated to the PT Published release policies Periodic major releases of EMI with clear support timelines Individual service or component releases within an EMI major release Guaranteed backward-compatibility of each service within a major release Ljubljana, NorduGrid 2010 2204/05/2010

27 EMI INFSO-RI-261611 Conclusions EMI is the new European reference for Grid and distributed computing It brings together the expertise of the major European middleware providers It propose a practical, but ambitious plan to shape the future of European middleware to empower EGI and the research infrastructures at large Everybody is welcome to collaborate 04/05/2010 Ljubljana, NorduGrid 2010 27 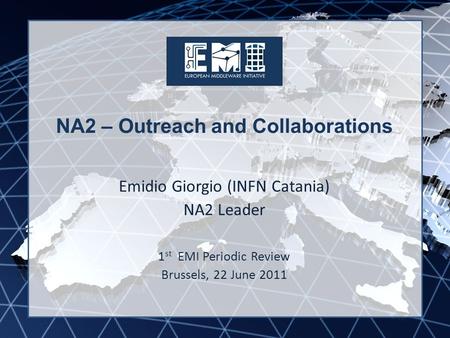 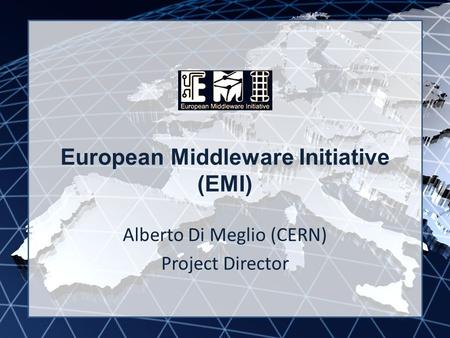 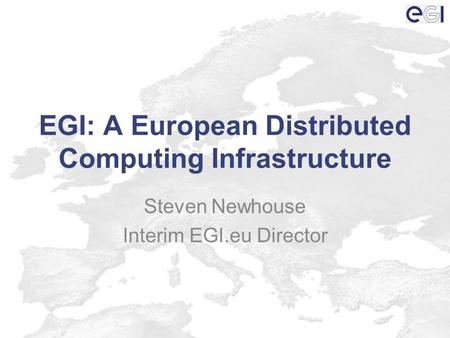 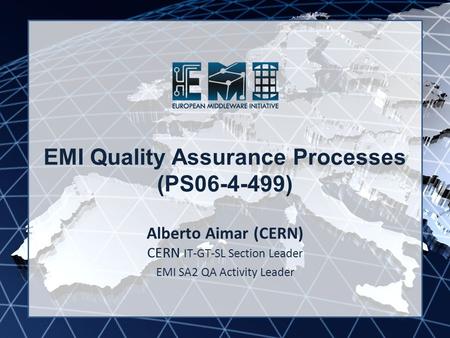 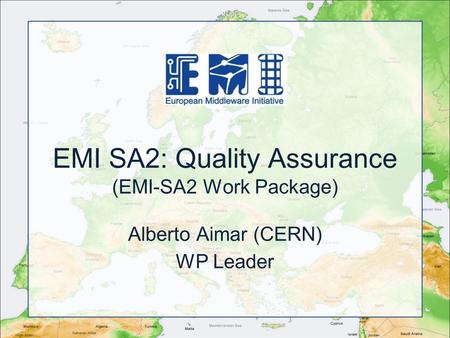 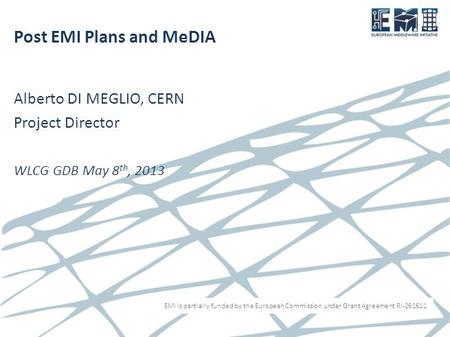 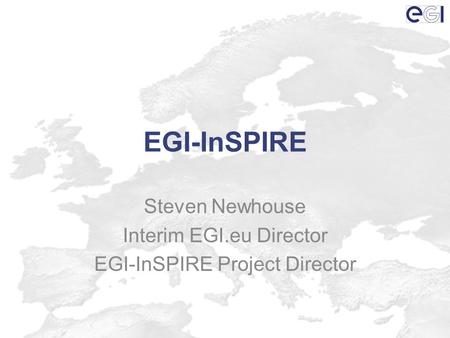 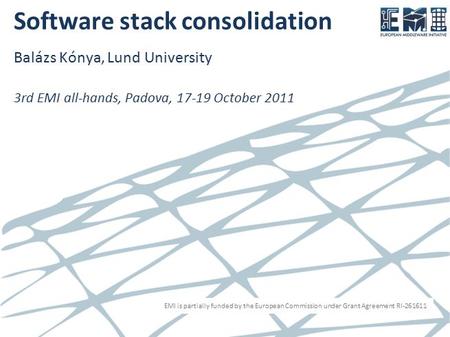 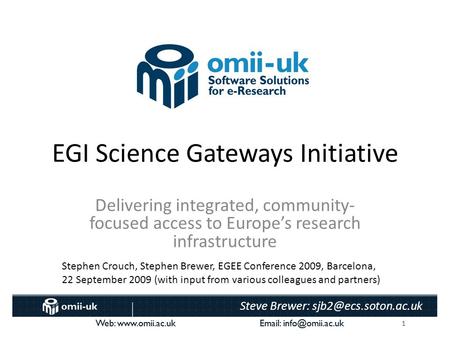 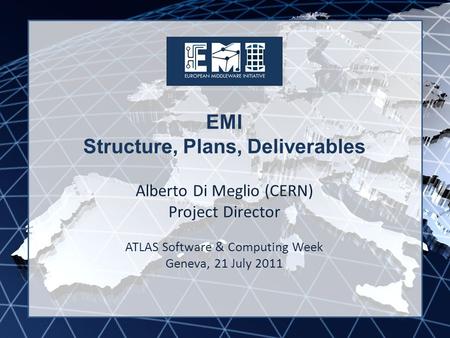 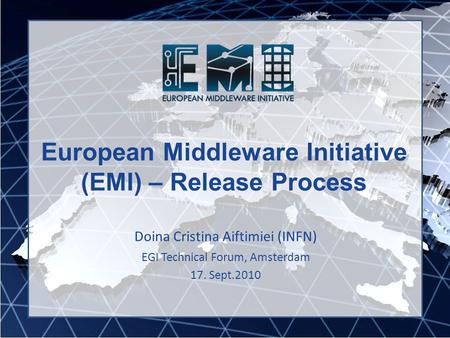 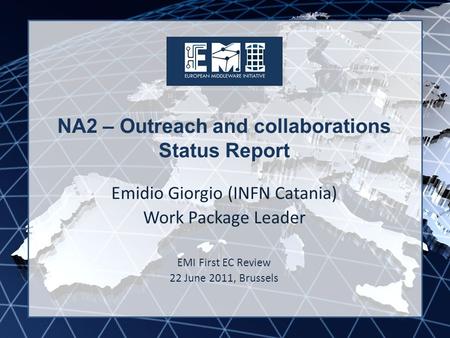 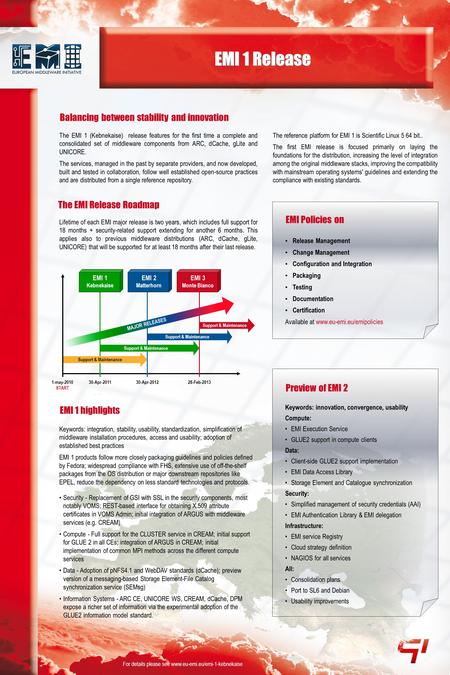 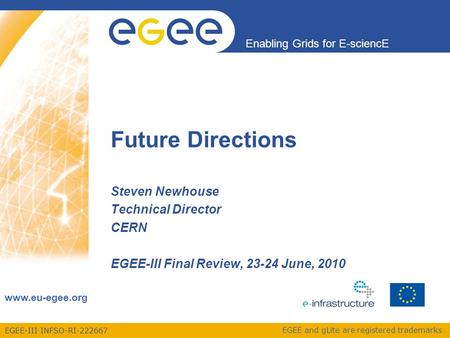 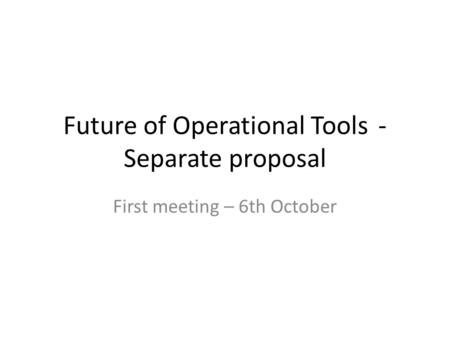 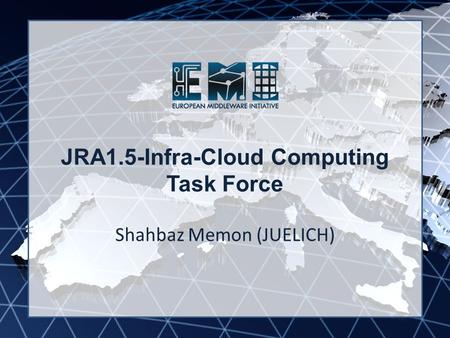