4 Displaying Relationships: Scatterplots Scatterplot of the data from the previous table are plotted as points on the graph at the right side. 4 About This Scatterplot… 1.What is the overall pattern (form, direction, and strength)? Form – Roughly a straight-line pattern. Direction – Positive association (both increase). Strength – Moderately strong (mostly on line). 2.Any striking deviations (outliers)? Not here. BAC vs. number of beers consumed Outliers – A deviation in a distribution of a data point falling outside the overall pattern.

5 Regression Lines They describe how response variables y change as explanatory variables x change. They are used to predict the value of y for a given x. 5 Beer Example continued: A regression line has been added to be able to predict blood alcohol content from the number of beers a young adult drinks. Graphically, you can predict that if x = 6 beers, then y = 0.95 BAC. (Legal limit for driving in most states is BAC = 0.08.) BAC vs. number of beers consumed

8 Equation of the Correlation 8  To calculate the correlation, suppose you have data on variable x and y for n individuals.  From the data, you have the values calculated for the means and standard deviations x and y.  The correlation r between x and y is: _ _ r = [ sum ( x_i - x )( y_i – y )] / [(n -1) s_x s_y]  Correlation is strongly affected by a few outlying observations. (Also, the mean and standard deviation are affected by outliers.)

9 Correlation (continued)  The scatterplots below show examples of how the correlation r measures the direction and strength of a straight-line association. 9

10 Least Squares Regression Least-Squares Regression Line  A line that makes the sum of the squares of the vertical distances of the data points from the line as small as possible. Equation of the Least-Squares Regression Line  From the data for an explanatory variable x and a response variable y for n individuals, we have calculated the means ¯, ¯, and standard deviations s x, s y, as well as their correlation r. 10 This equation was used to calculate the line for predicting BAC for number of beers drunk. Predicted y = −0.0127 + 0.01796 x The least-squares regression line is the line: Predicted y = a + bx With slope … b = r s y /s x And intercept … a = ¯ − b ¯ xy xy

11 Interpreting Correlation and Regression  Both the correlation r and least-squares regression line can be strongly influenced by a few outlying points. Always make a scatterplot before doing any calculations.  Often the relationship between two variables is strongly influenced by other variables. Before conclusions are drawn based on correlation and regression, other possible effects of other variables should be considered.  A strong association between two variables is not enough to draw conclusions about cause and effect. Sometimes an observed association really does reflect cause and effect (such as drinking beer causes increased BAC). Sometimes a strong association is explained by other variables that influence both x and y. Remember, association does not imply causation. 11

12 Discussion Examples of positive / negative correlations in daily life. Other comments? Thank you ! 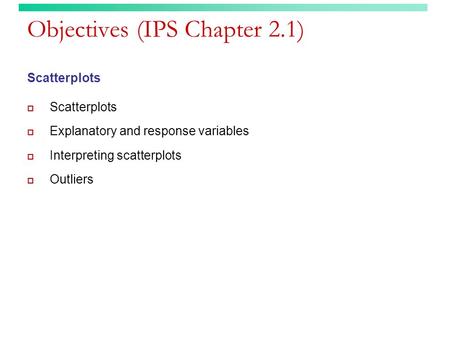