Presentation on theme: "Standard SS7H1 The student will analyze continuity and change in Africa leading to the 21st century. b. Explain how nationalism led to independence in."— Presentation transcript:

1 Standard SS7H1 The student will analyze continuity and change in Africa leading to the 21st century. b. Explain how nationalism led to independence in South Africa, Kenya, and Nigeria. c. Explain the creation and end of apartheid in South Africa and the roles of Nelson Mandela and F.W.de Klerk. d. Explain the impact of the Pan-African movement.

2 FROM 1910 to 1988 DIFFERENT COLONIES IN AFRICA GAINED THEIR INDEPENDENCE FROM EUROPEAN EMPIRES. THESE ARE KNOWN AS NATIONALIST MOVEMENTS.

3 How did nationalism lead to independence in South Africa, Kenya and Nigeria?

4 South Africa South Africa was originally settled by the Dutch who had little to do with the native Africans except to consider them as servants or working people. When the British took over in the early 1800s, the Dutch moved into land occupied by the Zulu tribe. Britain soon discovered rich deposits of gold and diamonds in South Africa. Because the British considered the native Africans second-class citizens, the Africans founded the African Nation Congress (ANC) to work for equal treatment of the nonwhite population. South Africa set up a strict system of separation of the races called the apartheid system. The ANC worked for many years to end this system, eventually getting international help through the use of embargos. By 1985, the embargos and continuing resistance led by African National Congress and the Pan African Congress forced South African government to begin making changes. Apartheid began to come apart and in 1994 South Africa held its first multiracial election and chose Nelson Mandela as the country’s first black president.

5 Nigeria Nigeria gained independence from Britain in 1960, and most people expected the new state to be stable and calm. Within months, however, war broke out between the Christian south and the Muslim north. The religious war left many thousands dead or injured. The country tried to reorganize as 12 different regions, even the oil-rich province in the eastern part of the country declared itself to be the independent State of Biafra. Military coups and outbreaks of violence marked the years that followed. Elections were held in 1999 that seemed more free and open than wheat had gone before, but the government still remains unstable. Nigeria has the potential to have great wealth from their oil supplies. However, because of corruption in the government this resource has not been developed. As a result, Nigeria must rely on foreign aid and foreign supplies for their people.

6 Kenya Kenya became independent of British rule in 1964, under the leadership of Joseph Kenyatta, a leader of the Kenyan National African Union (KNAU). While Kenya was glad to be free of British rule, the government was not open or free. Under Kenyatta and his successor, Daniel arap Moi, the KNAU ran almost unopposed in every national election until the 1990s. At that time, the international community told Moi that unless Kenya improved their civil rights record, economic assistance from abroad would be cut off. There has been some improvement in the political rights of Kenya’s people, but more is needed. The country remains a multi-party state on the books, but the reality is that the KNAU still controls much of the government.

7 Speech at the Kenya African Union July 26, 1952 “
Speech at the Kenya African Union July 26, 1952 “... I want you to know the purpose of the Kenya African Union. It is the biggest purpose the African has. It involves every African in Kenya and it is their mouthpiece which asks for freedom. K.A.U. is you and you are the K.A.U. … True democracy has no colour distinction. It does not choose between black and white. We are here in this tremendous gathering under the K.A.U. flag to find which road leads us from darkness into democracy. In order to find it we Africans must first achieve the right to elect our own representatives.” - Jomo Kenyatta

8 c. Explain the creation and end of apartheid in South Africa and the roles of Nelson Mandela and F.W.de Klerk. What is Apartheid? The term apartheid (from the Afrikaans word for "apartness") was coined in the 1930s and used as a political slogan of the National Party in the early 1940s, but the policy itself extends back to the beginning of white settlers (the Dutch) in South Africa in 1652. After the primarily Afrikaner Nationalists came to power in 1948, apartheid was implemented under law.

9 How did the new government enforce this new policy?
The implementation of the policy, later referred to as "separate development," was made possible by the Population Registration Act of 1950, which put all South Africans into three racial categories: Bantu (black African), White, or Colored (of mixed race). A fourth category, Asian (Indians and Pakistanis), was added later.

10 Afrikaner Nationalists’ policies
The system of apartheid was enforced by a series of laws passed in the 1950s: the Group Areas Act of 1950 assigned races to different residential and business sections in urban areas The Land Acts of 1954 and 1955 restricted nonwhite residence to specific areas. These laws further restricted the already limited right of black Africans to own land, entrenching the white minority's control of over 80 percent of South African land. Other laws prohibited most social interaction between the races; enforced the segregation of public facilities, including educational; created race-specific jobs; limited the powers of nonwhite unions; and minimized nonwhite participation in government.

11 More Restrictions!!! The Bantu Authorities Act of 1951 and the Promotion of Bantu Self-Government Act of 1959 furthered these divisions between the races by creating ten African "homelands“ to be self-governed by the various “tribes.” The Bantu Homelands Citizenship Act of 1970 made every black South African a citizen of one of the homelands which eliminated black Africans from South African politics.

13 Segregated public facilities in Johannesburg, 1985.
Young, black South Africans looking in on a game of soccer at an all-white school in Johannesburg. Government spending, about 10 times more for white children than for black, clearly showed the inequality designed to give whites more economic and political power. Poorly trained teachers, overcrowded classrooms, and inadequate recreational facilities were normal for black children, if in fact they had any schooling available at all.

15 A number of black political groups, often supported by sympathetic whites, opposed apartheid using a variety of tactics, including violence, strikes, demonstrations, and sabotage - strategies that often met with severe consequences from the government.

16 Grave of the young Black leader, Steve Biko, in King Williams Town, South Africa. Biko died while in prison in During the investigation into his death, strong evidence was presented that Biko suffered violent and inhumane treatment during his imprisonment.

17 Key word is “selective”
Apartheid was also denounced by the international community: in 1961 South Africa was forced to withdraw from the British Commonwealth by member countries who were critical of the apartheid system, and in 1985 the governments of the United States and Great Britain imposed selective economic sanctions on South Africa in protest of its racial policy.

18 Reform!!! As antiapartheid pressure mounted within and outside of South Africa, the South African government, led by President F. W. de Klerk, began to dismantle the apartheid system in the early 1990s. The year 1990 brought a National Party government dedicated to reform and also saw the legalization of formerly banned black congresses (including the ANC—African National Congress) and the release of imprisoned black leaders. In 1994 the country's constitution was rewritten and free general elections were held for the first time in its history, and with Nelson Mandela's election as South Africa's first black president, the last remnants of the apartheid system were finally outlawed.

20 Nelson Mandela & F. W. de Klerk
Throughout the years of Apartheid, two groups were working to end this South African regime – the African National Congress led by Nelson Mandela, and the Pan African Congress. Riots and fighting took place constantly, and Nelson Mandela was sentenced to life in prison for his work against the regime. Eventually, the South African government had to admit that their policy of apartheid had no place in the modern world. In 1990, South African President F.W. de Klerk agreed to allow the ANC to operate as a legal party and he released Nelson Mandela from prison after he had served 27 years in prison. de Klerk also began to repeal the apartheid laws.

22 d. Explain the impact of the Pan-African movement.
The Pan-African movement began as a reaction to the terrible experiences of colonial rule and the desire for people of African descent, no matter where they lived in the world, to think of Africa as a homeland. The first people to support the idea of Pan-Africans were Africans who were living in other parts of the world. They felt all Africans. No matter where they lived, shared a bond with each other. They also called for Africans all over the continent to think of themselves as one people and to work for the betterment of all. They wanted to end European control of the continent and to make Africa a homeland for all people of African descent. While the peaceful unification of Africa has never taken place, the Pan-African movement can take a lot of credit for sparking independence movements that left nearly all African nations free of colonial rule by the 1980s.

Download ppt "Standard SS7H1 The student will analyze continuity and change in Africa leading to the 21st century. b. Explain how nationalism led to independence in." 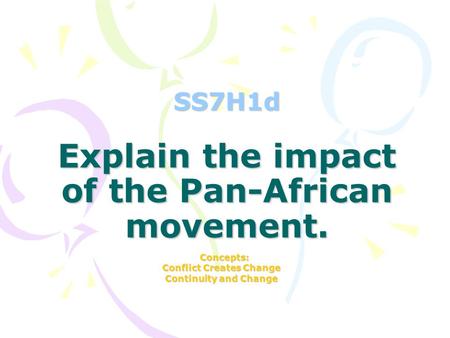 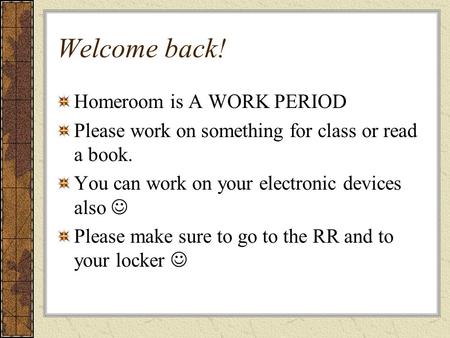 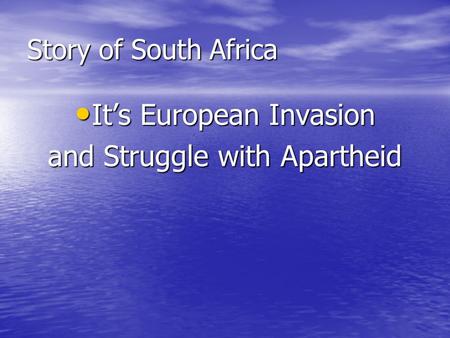 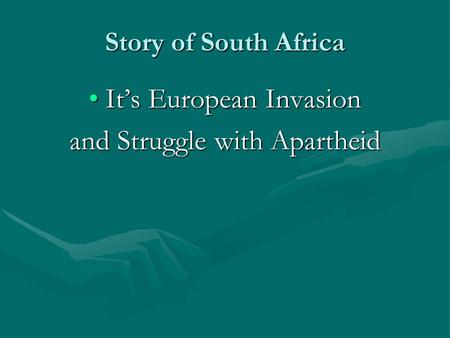 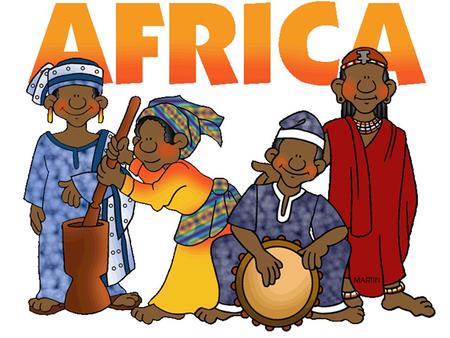 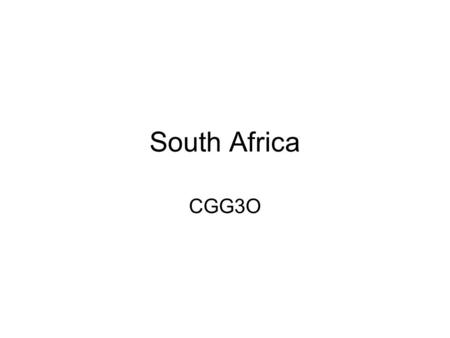 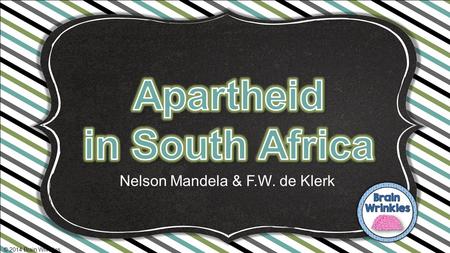