4 Before you read you should know ..
The Bluest Eye was written in 1970. The author, Toni Morrison, was born during the Great Depression and had a rough childhood. During this time, racism was a major issue, especially in the South. The narrator changes throughout the book, so pay close attention. There are some very graphic scenes in the book.

5 The Author’s Objective
The Bluest Eye is inspired by a real girl that Morrison met when she was younger. The book came from a last minute story that she had to write for a literary discussion group. Toni Morrison wanted to write a book “in which black girls were center stage.”

6 Setting The Bluest Eye is set in Lorain, Ohio.
The Great Depression has just ended and many families are hard for money. The book takes place in various places depending on which character is narrating and whose story is being told.

7 Summary of the Book Pecola Breedlove is a young, black girl with a very difficult life. Her father is a drunk and her mother just ignores all the problems at home. Pecola’s brother runs away a lot, so she spends most of her time alone, dreaming of a different life. No one likes Pecola. They think she is dirty and nasty. Boys make fun of her, girls mock her and adults look past her. However, she does make two friends. Claudia and Freida MacTeer get to know Pecola when she comes to live with them due to her rough home life. They sympathize with her and when she moves back with her parents, they keep an eye on her to make sure she is okay.

8 Summary continued Pecola’s life takes a drastic turn when her father loses control. One day when he comes home and she is there alone, he gets a strange feeling, the same feeling he had the first time he met his wife. The consequences of her father’s actions deeply impact Pecola and her future. Claudia and Freida sacrifice all the money they have to save the little black girl who dreams of blue eyes. Most of the book is composed of events from the pasts of the main characters. These events are used to explain the actions and personalities of the people involved.

9 Main Themes Judging A lot of the feelings between characters are the product of quick judgement. No one took the time to get to know the Breedloves. They saw they way they lived and judged them, without looking farther into the situation, without really knowing how little Pecola felt. Whiteness is Beauty Pecola thinks the only way she can be pretty is to be like the white girls. She admires Shirley Temple with her golden locks and sky blue eyes. Instead of excepting who she is, dark skin and all, she wastes away dreaming to be someone she can never be.

10 & more main themes Abuse
Almost every character is somehow abused throughout the book. Mrs. MacTeer yells at her daughters constantly, Pauline Breedlove ignores Pecola when she tries to tell her about the things her father has done, and Cholly Breedlove beats his wife and abuses his daughter. Connections Somehow, every character in The Bluest Eye is connected. Through the flashbacks you learn that events that may have happened a long time ago still have an affect on people. The actions of one affect the lives of many. Things don’t just start and stop with one person. They travel and change through the many different relationships gained and maintained throughout the novel.

11 The bad .. For me, The Bluest Eye was kind of difficult to follow. You have to remember details from the beginning of the book to piece together events alluded to in the end of the book. I didn’t realize certain things had happened until after I finished the novel. The narration was tough to keep straight. I didn’t know whose perspective I was reading by.

12 .. & the good Aside from some confusion, The Bluest Eye was a really good book. It took a world that most of us don’t know about and made it real. It really makes you think how others might live, how others might think and how your judgments can affect the lives they live. Toni Morrison has a great way with words. Her language is very appropriate for the time period and place. It makes the setting feel more real and modern. Morrison also has a great way of organizing her work. It kept me intrigued and I didn’t want the book down until I knew what happened.

13 Should you read it ? I would recommend this book to anyone. It has a good story and the characters and their situations really open your eyes. 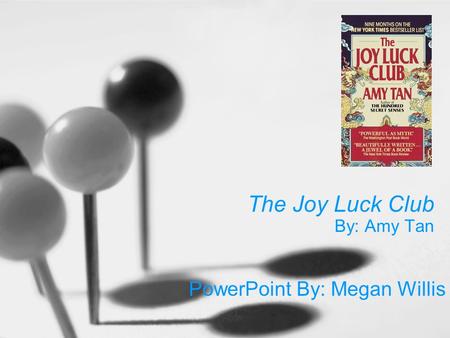 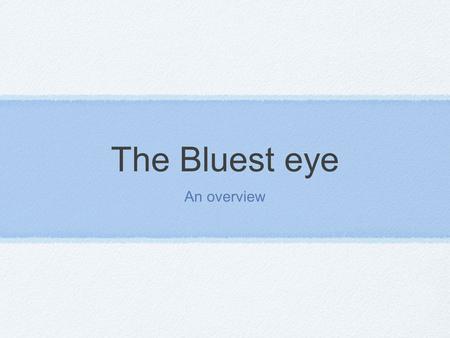 The Bluest eye An overview. 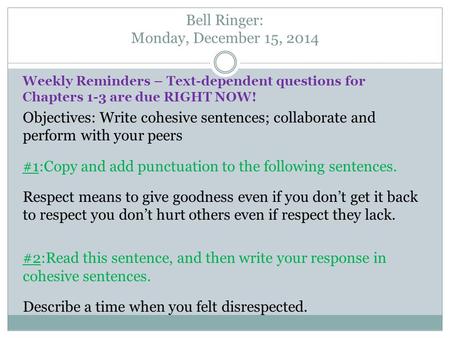 Weekly Reminders – Text-dependent questions for Chapters 1-3 are due RIGHT NOW! Objectives: Write cohesive sentences; collaborate and perform with your. 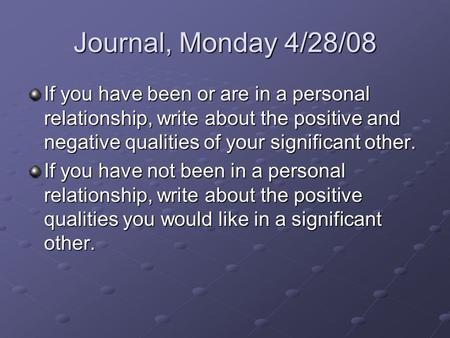 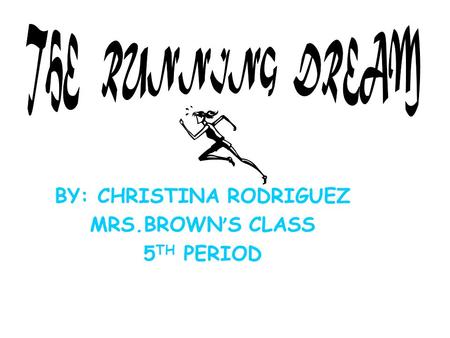 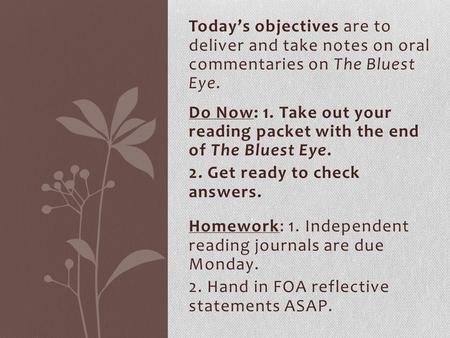 Today’s objectives are to deliver and take notes on oral commentaries on The Bluest Eye. Do Now: 1. Take out your reading packet with the end of The Bluest. 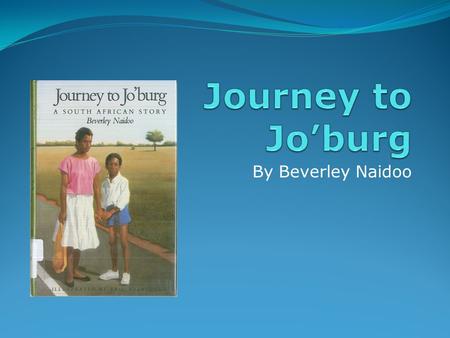 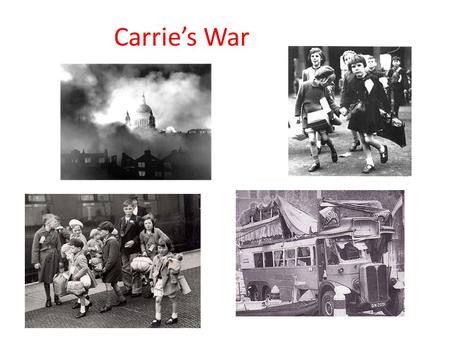