3 Why a Five Year Plan? Set useful goals –Its a long enough timeframe to think about more than the stuff in my mailbox Set realistic goals –Yet its probably a short enough time frame to understand what could be achieved And it has a fine set of precedents! –Many controlled economies have used the five year plan as the basis for national planning, so why not the Internet?

4 A personal set of views Predicting the future is easy – anyone can do it – and many do! –And this is just one set of views and opinions about the next 5 years on the Internet –There are as many views as there are people looking forward……

7 1997 Issues Transmission bandwidth was still relatively scarce and relatively expensive ATM was seen as the switching technology of choice for many Last mile technology was all about making 56K modems more reliable The fuss about the online economy was often seen as either too much enthusiasm or too much skepticism, or even a mix of both IPv6, VPNs, vLANs, VOIP, QoS, Mobility, GigE all hot technical topics

8 1997 Issues The value of the Internet was not proven or even widely assumed Non-Internet online products were still around at the time –Such as, for example, MSN ISPs and Telcos were generally on opposite sides of a pretty large dividing wall –ISPs viewed the telco with suspicion as a massive gorilla who was going to destroy their market –Telcos viewed the ISPs with suspicion as a competitive entrant with no background or experience in the sector with requirements that were often at odds with telco planning and expectation –A severe clash of cultures was inevitable

11 The Last Five Years on NASDAQ Boom and Bust!

13 Today Its takes more than wild-eyed optimism Its a business in a strongly competitive service market: –Know your customer –Know your product –Know your costs –Know your margins –Know your direction –And work hard!

15 The Next Five Years Predicting the Future is easy –The tough bit will be getting it right! –What follows are purely personal visions from the crystal ball ….

16 From Optimism to Conservatism? A conservative period of controlled expansion rather than explosive growth Accompanied by greater emphasis on service robustness rather than service differentiation

17 Security, Security, Security A highly visible security focus for the next few years –Encryption and authentication at many levels of the IP protocol suite –Dismantling aspects of the Internets distributed trust model and attempting to replace it with negotiated conditional trust

18 Shifting product emphasis A recognition of the existence of price/ quality tradeoffs in the IP market, similar to other markets –Differentiation will be based on quality of the product, not on definable attributes of the offered data that attempt to generate different responses from the network in terms of service quality

19 Goodbye to Convergence? A shift in engineering planning? –Move away from the ideal of a mythical single converged switching platform ATM is not a panacea for converged networks And nor is IP –Move to accept an engineering base of multiple platforms with service specialty in each platform Multiple wavelengths, multiple service platforms

21 Last mile considerations Concentrate on deployment of fibre and DSL based last mile IP networks Gradual phase out of modems as the dominant IP access device with a shift to emerging ubiquity of broadband last mile access Wireless is probably not a logical contender for last mile Hybrid Fibre Coax systems are capital intensive and often rely on a strong pay-TV market to provide some capital leverage Fibre is great – but its also capital intensive. DSL is a reasonable compromise for many environments

22 Fibre Capacity – Five years of abundance? Dense Wave Division Multiplexing is lifting per- strand optical capacity –from 2.5Gbps to 3.2Tbps (320 wavelengths, each of 10Gbps per lambda) per optical strand Theoretical ceiling of around 75Tbps per strand –Probably achievable in five years using 40G or 100G per wavelength –But no obvious projected market demand levers to motivate high volume deployment of such technologies

23 Unit cost movements Transmission costs per Gbps per Kilometer are coming down due to DWDM deployments – likely to continue Switching costs per Mpps are coming down due to Moores law at work – likely to continue Installation costs per route mile are remaining constant – and likely to remain so, or possibly rise Per user volumes are rising – future trends of this metric are influenced by the adoption of various tariff structures and content patterns Growth in number of users will probably stabilize

26 IPv6 and the next five years IP with larger addresses Address space requirements are no longer being easily met by IPv4 This is an issue for high volume deployments including: –GPRS mobile –Pocket IP devices –Consumer devices Sony DCRTRV950

27 IPv6 Weaknesses Not sufficiently different from IPv4 –No value add to fuel investment in transition –Reuses large amounts of V4 infrastructure to theres an expectation of identical outcomes http://www.kame.net Not sufficiently similar to IPv4 –The coupling of address and identity functions in the IP architecture makes transparent address translation a challenge –Referential integrity issues – is the DNS protocol independent or loosely/tightly coupled between V6 and V4 Still working on the technology –Address architecture –Site-Local addressing –Multi-homing –Mobility –Transition mechanisms

28 IPv6 Futures IPV6 appears to offer reasonable technology solutions that preserve IP integrity, reduce middleware dependencies and allow full end-to-end IP functionality Issues are concerned with co-existence with the IPv4 base and allowing full inter-working between the two protocol domains The next couple of years are make or break for V6 –Either we start to deploy in volume –Or we better figure out how to live with the NAT mess!

31 Routing – Exterior Routing BGP is the protocol of choice for exterior routing –Operator base highly familiar with BGP characteristics and capabilities –Easily disrupted Poor security model with massive levels of distributed trust and no coupled authentication mechanisms –Poor scaling performance –Highly unstable (oscillation and damping) –Unresponsive to dynamic changes –No TE / QoS Support And none likely! –No alternative to field! And none likely!

32 MPLS Where ATM collides with IP MPLS is an encapsulation technology that adds a network-specific egress label of a packet, and then uses this for each hop-by-hop switching decision Originally thought of as a faster switching technology than IP-level switching. This is not the case Now thought of as a more robust mechanism of network-specific encap than IP in IP, or IP in L2TP in IP Has much of the characteristics of a solution looking for a problem: –IP-VPNs? IP-TE? IP-QoS? Multi-protocol variants of these? –TE is the most likely outcome

35 VOIP In theory voice is just another IP application In practice its a lot harder than that - if you dont have heaps and heaps of excess bandwidth –Issues of Quality and Signalling –And VOIP is often most heavily used on the thinnest trunk routes VOIP is just one solution –It works well in small volumes on todays networks –Will it continue to operate at relatively small volume?

36 VOIP as a QoS problem Quality –Voice is a low jitter, low loss, low latency, constant load application –TCP is a high jitter, medium loss, variable load transport –The problem is to get VOIP into the network without it being unduly impaired by TCP flows Either overprovision the network and minimize the impacts or differentiate the traffic to the network and allow the network elements to treat VOIP packets differently from TCP packets

37 VOIP as a signalling problem How can you map the E.164 telephone number space into the Internet environment? –Allow VOIP gateways to operate autonomously as an agent of the caller rather than the reciever –ENUM technology to use the DNS to map an E.164 number to a URL service location –Use the DNS to map the URL service location to an IP address of the service point –What happens with NATs?

38 The VOIP Plan No – the telephone network will still be there in 2007 And it will probably still carry the bulk of the worlds call minutes But –VOIP last mile may become common in the office environment –Hybrid control environments (Megaco, ENUM) may emerge –The PSTN may carry the call, but the IP network may manage the call setup characteristics. –Call features could become yet another desktop application

39 Network Abuse Wouldnt if be so good if all spam suddenly disappeared? –It would be good if we could work out how to stop this form of abuse anti-social behaviour? – The true value of the Internet for most customers lies in person-to-person messaging –This value must be protected from abuse Either we may have to –give up some level of personal privacy, –increase the cost of the service, –pass more control to operators and regulators, –allow greater levels of regulatory oversight on the Internet, or –allow the network to be massively devalued by such abuse

40 Security Just how secure is IP? Not anywhere near secure enough! –DNS –Routing –Addressing –Content –Vulnerabilities are just about everywhere

41 Wireless In theory –IP makes minimal assumptions about the nature of the transmission medium. IP over wireless works well. In practice –high speed TCP over wireless solutions only works in environments of low radius of coverage and high power –TCP performance is highly sensitive to packet loss and extended packet transmission latency

42 Wireless 3G IP-based wireless deployments will not efficiently interoperate with the wired IP Internet Likely 3G deployment scenario of wireless gateway systems acting as transport-level bridges, allowing the wireless domain to use a modified TCP stack that should operate efficiently in a wireless environment 802.11 is different Bluetooth is yet to happen (or not)

43 Wireless and Mobility IP is not comfortable over radio systems –IP requires low bit error rates, constant RTTs and high onset threshholds in order to operate efficiently –Adaptations to wireless have not been wildly successful to date WAP –Likely adoption of nomadism as an adequate IP mobile solution Few assumptions about the nature of mobility itself No assumptions about suspended sessions Incremental deployment models

47 So what can we expect? My personal list of expectations for the next five years: –No repeat of boom and bust –Conservative business objectives with conservative returns –Continued levels of regulatory interest to ensure that public objectives are being achieved –Continued expansion of the underlying infrastructure –Sector members with longer term objectives phrased more modestly than may have been the case in the past five years 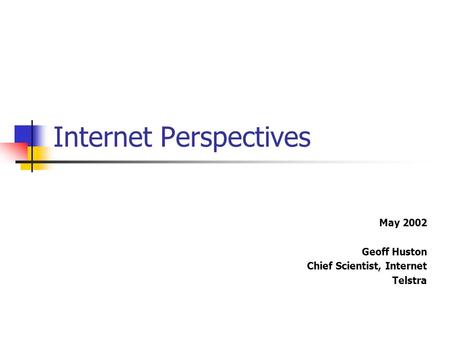 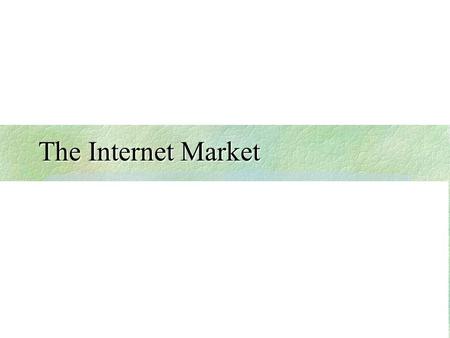 The Internet Market. ISP Economics The ISP business is a repackaging of carriage offerings, combining IT capabilities with data transmission services. 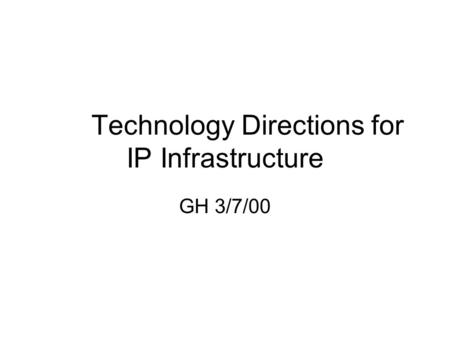 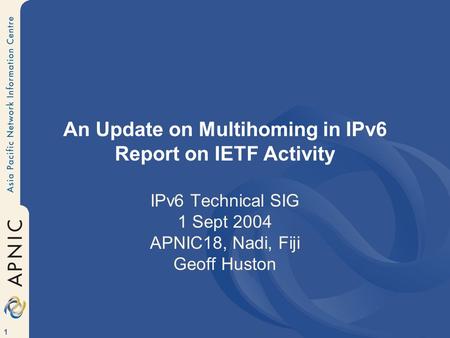 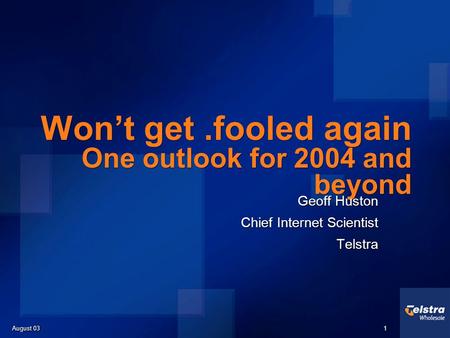 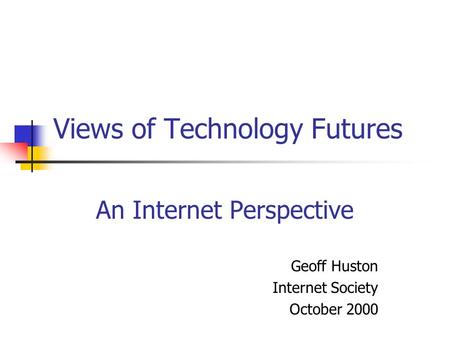 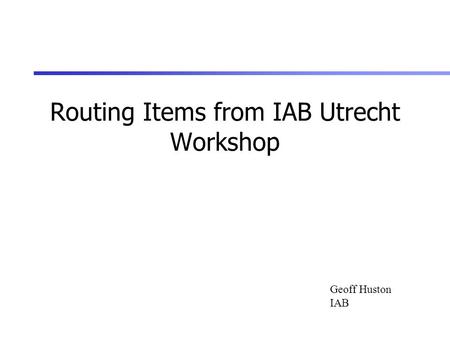 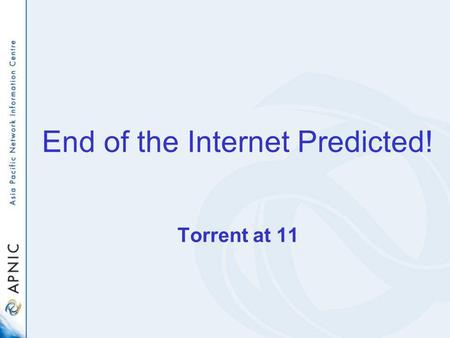 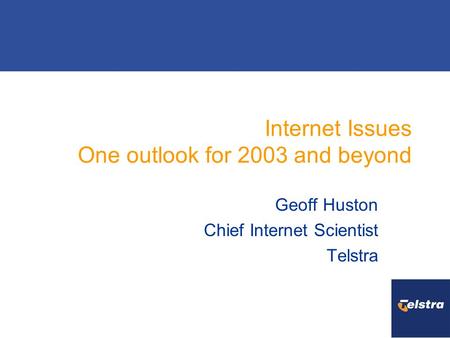 Internet Issues One outlook for 2003 and beyond Geoff Huston Chief Internet Scientist Telstra. 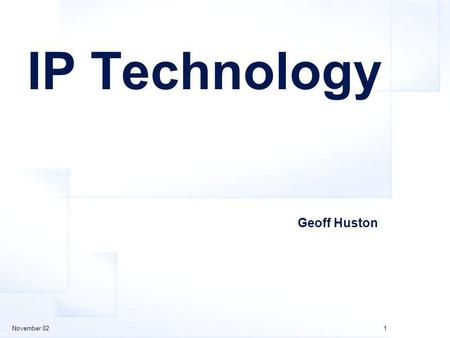 November 021 IP Technology Geoff Huston. November 022 Overview A quick skate across the top of an entire suite of technology- based issues that exist. 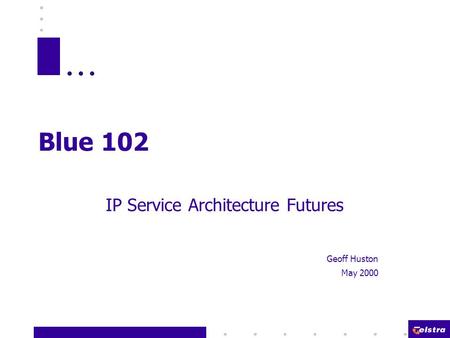 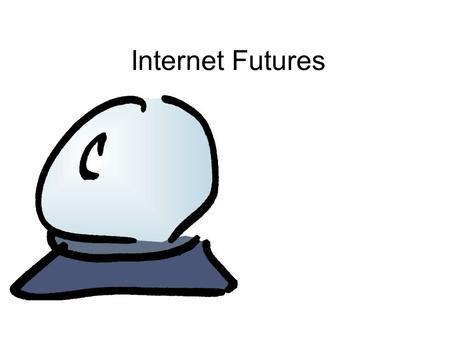 Internet Futures. Acknowledgement to Anders Rockstrom of Telia Sonera, whose presentation on this topic had a profound impact on me – he presented his. 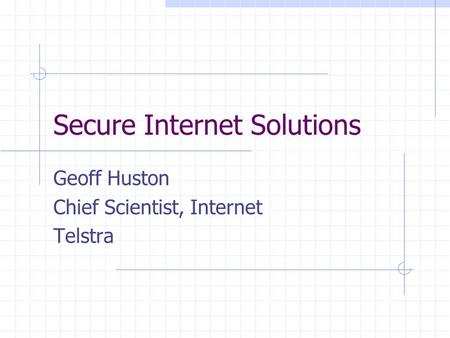 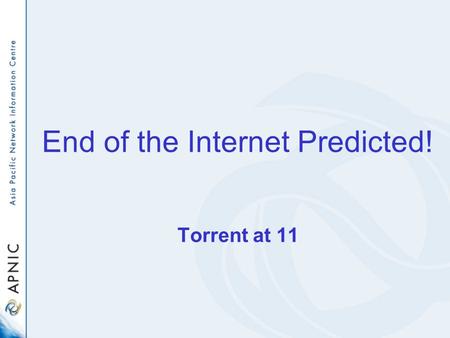 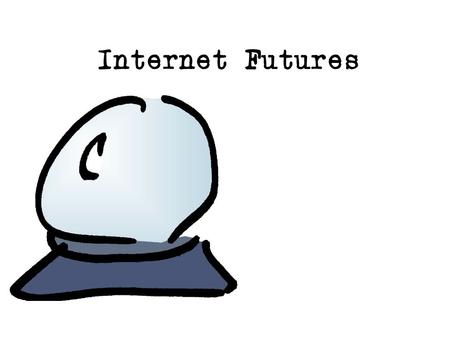 Internet Futures. My Aim: share some thoughts about the Internet and its future think about some of the major factors that will shape our future + 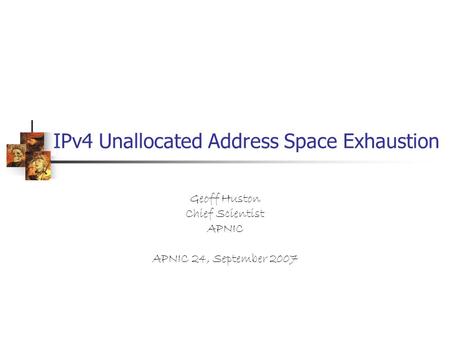 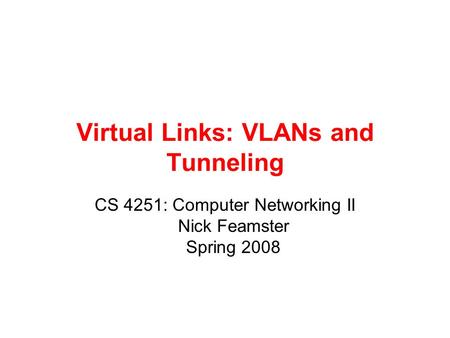 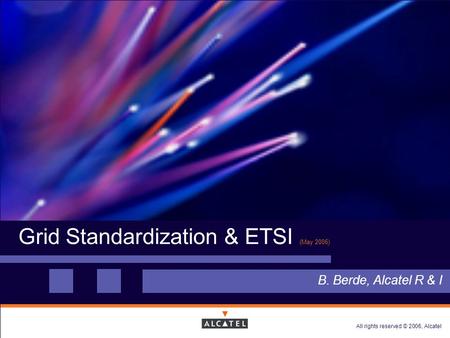 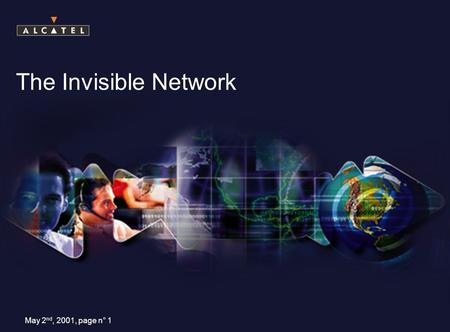 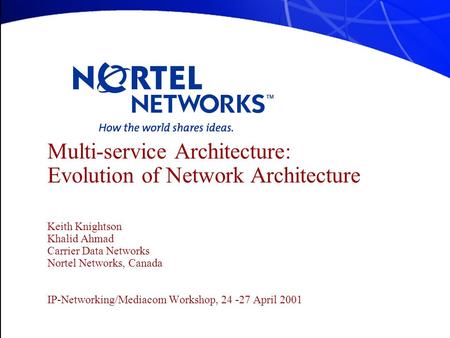