2 Genetic Engineering- (A.K.A. Recombinant DNA Technology)
 frequency of an allele in a population *involves cutting (cleaving) DNA from one organism into small fragments & inserting the fragments into a host organism of the same or a different species

3 AMAZING!!! Organism will use the foreign DNA as if it were its own!!
Transgenic Organism- organisms that contain functional recombinant DNA (rDNA) from a different organism

6 I. Restriction Enzymes AKA Restriction Endonucleases
What macromolecule do you think they are made of? They are PROTEINS that cut strands of DNA at specific nucleotide sequences

7 Isolating foreign DNA fragments
-Restriction Enzymes- DNA cutting enzymes that can cut both strands of a DNA molecule at a specific base pair sequence (A-T, C-G) -similar to cutting a zipper into pieces -must find the same sequence of base pairs on both DNA strands but they must run in opposite directions

8 Restriction Enzymes (cont.)
There are many different restriction enzymes that each cut DNA at different nucleotide sequences Most will cut the DNA with a staggered cut Usually occurs at a palindrome: a sequence of units that can be read the same way in either direction (ex. Mom, dad, racecar) 5‘…GAATTC…3’ 3‘…CTTAAG…5’

10 D. Sticky Ends The staggered cuts leave the DNA with end pieces “sticking off” We call these “sticky ends” These exposed N-bases will want to join with other complimentary exposed bases

16 Why would anyone go through the trouble of cutting DNA???
One reason… Recombinant DNA Break down the word…what do you think recombinant means? Other reasons… DNA fingerprinting, gene therapy…

18 B. Bacterial Structure Bacteria are often used in biotechnology because they have plasmids A PLASMID is a circular piece of DNA that exists apart from the chromosome and replicates independently of it. A plasmid is therefore called a VECTOR.

21 D. Isolating Genes Must isolate the gene of interest first before you insert it into the plasmid How do you do this? Use a restriction enzyme!!!

22 Final Steps of Making Recombinant DNA
Once the gene is isolated, have to cut the organism’s DNA with the same restriction enzyme…why? The sticky ends will naturally be attracted to each other Add DNA LIGASE: enzyme that seals the fragments together After the foreign DNA has been spliced (glued) into the plasmid using an enzyme DNA ligase, the rDNA is transferred into a bacterial cell or other organism Now organism is called a Transgenic Organism- organisms that contain functional recombinant DNA (rDNA) from a different organism

26 III. Uses for Recombinant DNA
Recombinant DNA has been gaining importance over the last few years, and will become more important as genetic diseases become more prevalent and agricultural area is reduced. Below are some of the areas where Recombinant DNA will have an impact: Better Crops (drought & heat resistance) GMO’s (crops like seedless watermelon, pluots, etc.) Recombinant Vaccines (i.e. Hepatitis B) Production of clotting factors Production of insulin Production of recombinant pharmaceuticals Plants that produce their own insecticides Germ line and somatic gene therapy

27 RECAP Steps for making a transgenic organism:
Locate and isolate the gene of interest Cut out the gene and cut the plasmid using the appropriate restriction enzyme

28 3. Insert the desired gene into the plasmid matching up the sticky ends

29 4. Use the enzyme DNA ligase to seal up the sticky ends

30 5. Transfer the vector in the host organism where it will replicate
6. Host organism produces the protein coded for by the recombinant DNA

35 Plants have been genetically modified to produce insect toxin 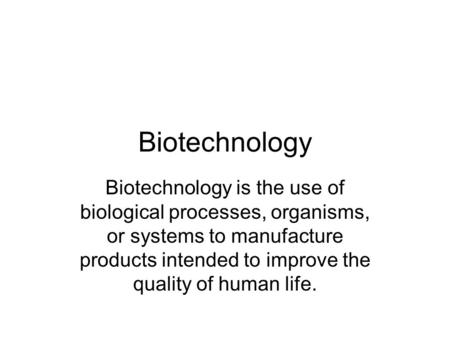