4 The Silver Issue  “Crime of ’73”  demonetization of silver (govt. stopped coining silver).  Bland-Allison Act (1878)  limited silver coinage to $2-$4 mil. per mo. (based on the 16:1 ratio of silver to gold).  Sherman Silver Purchase Act (1890)  The US Treasury must purchase $4.5 mil. oz. of silver a month.  Govt. deposited most silver in the US Treasury rather than circulation.

6 The Grange Movement  First organized in the 1870s in the Midwest, the south, and Texas.  Set up cooperative associations.  Social and educational components.  Succeeded in lobbying for “Granger Laws.”  Rapidly declined by the late 1870s.

8 The Farmers Alliances  Begun in the late 1880s (Texas first  the Southern Alliance; then in the Midwest  the Northern Alliance).  Built upon the ashes of the Grange.  More political and less social than the Grange.  Ran candidates for office.  Controlled 8 state legislatures & had 47 representatives in Congress during the 1890s.

17 Result of Election Returns  Populist vote increased by 40% in the bi-election year, 1894.  Democratic party losses in the West were catastrophic!  But, Republicans won control of the House.

23 “A Giant Straddle”: Suggestion for a McKinley Political Poster

25 Why Did Bryan Loose?  His focus on silver undermined efforts to build bridges to urban voters.  He did not form alliances with other groups.  McKinley’s campaign was well- organized and highly funded.

26 Gold Triumphs Over Silver  1900  Gold Standard Act  confirmed the nation’s commitment to the gold standard.  A victory for the forces of conservatism.

30 Why Did Populism Decline? 1. The economy experienced rapid change. 2. The era of small producers and farmers was fading away. 3. Race divided the Populist Party, especially in the South. 4. The Populists were not able to break existing party loyalties. 5. Most of their agenda was co-opted by the Democratic Party. 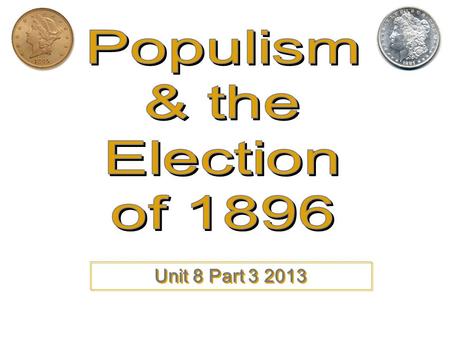 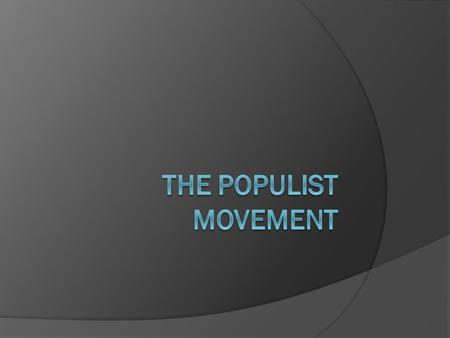 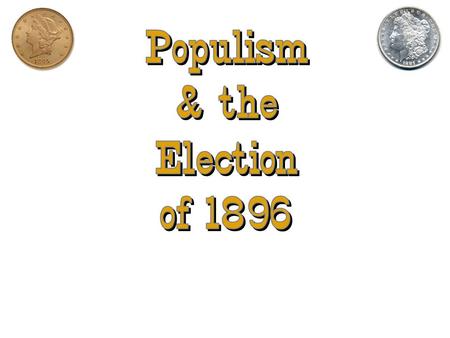