3 Purpose of Database Systems (Cont.)
Drawbacks of using file systems (cont.) Atomicity of updates Failures may leave database in an inconsistent state with partial updates carried out E.g. transfer of funds from one account to another should either complete or not happen at all Concurrent access by multiple users Concurrent accesses needed for performance Uncontrolled concurrent accesses can lead to inconsistencies E.g. two people reading a balance and updating it at the same time Security problems Database systems offer solutions to all the above problems

10 SQL SQL: most widely used language (combines procedural and declarative features) E.g. find the name of the customer with customer-id select customer.customer-name from customer where customer.customer-id = ‘ ’ E.g. find the balances of all accounts held by the customer with customer-id select account.balance from depositor, account where depositor.customer-id = ‘ ’ and depositor.account-number = account.account-number Application programs generally access databases through one of Language extensions to allow embedded SQL Application program interface (e.g. ODBC/JDBC) which allow SQL queries to be sent to a database

11 Transaction Management
A transaction is a collection of operations that performs a single logical function in a database application Transaction-management component ensures that the database remains in a consistent (correct) state despite system failures (e.g., power failures and operating system crashes) and transaction failures. Concurrency-control manager controls the interaction among the concurrent transactions, to ensure the consistency of the database.

12 Entity-Relationship Model
The ER model is a very useful tool for designing databases A database can be modeled as: a collection of entities, relationships among entities. An entity is an object that exists and is distinguishable from other objects. Example: specific person, company, event, plant Entities have attributes Example: people have names and addresses An entity set is a set of entities of the same type that share the same properties. Example: set of all persons, companies, classes, accounts

14 Attributes An entity is represented by a set of attributes, that is descriptive properties possessed by all members of an entity set. Example: customer = (customer-id, customer-name, customer-street, customer-city) loan = (loan-number, amount) Domain – the set of permitted values for each attribute Attribute types: Simple and composite attributes (e.g., address). Single-valued and multi-valued attributes E.g. multivalued attribute: phone-numbers Derived attributes Can be computed from other attributes E.g. age, given the date of birth

26 Roles Entity sets of a relationship need not be distinct
The labels “manager” and “worker” are called roles; they specify how employee entities interact via the works-for relationship set. Roles are indicated in E-R diagrams by labeling the lines that connect diamonds to rectangles. Role labels are optional, and are used to clarify semantics of the relationship

29 E-R Diagram with a Ternary Relationship
Suppose employees of a bank may have jobs (responsibilities) at multiple branches, with different jobs at different branches. Then there is a ternary relationship set between entity sets employee, job and branch

36 ISA (`is a’) Hierarchies
name ssn lot Employees As in C++, or other PLs, attributes are inherited. If we declare A ISA B, every A entity is also considered to be a B entity. hourly_wages hours_worked ISA contractid Hourly_Emps Contract_Emps Overlap constraints: Can Joe be an Hourly_Emps as well as a Contract_Emps entity? (Allowed/disallowed) Covering constraints: Does every Employees entity also have to be an Hourly_Emps or a Contract_Emps entity? (Yes/no) Reasons for using ISA: To add descriptive attributes specific to a subclass. To identify entities that participate in a relationship. 12

37 ER Design Decisions - Attribute vs Entity
For each employee we want to store the office number, location of the office (e.g., Building A, floor 6), and telephone. Several employees share the same office

38 ER Design Decisions - Entity vs Relationship
Account example Can you see some differences? (e.g., can you have accounts without a customer?)

39 ER Design Decisions - Entity vs Relationship
You want to record the period that an employ works for some department. from to name Employees ssn lot dname did budget Works_In2 Departments name dname budget did ssn lot Works_In3 Employees Departments Duration from to

40 ER Design Decisions - Strong vs. Weak Entity
Example: What if in the accounts example (i) an account must be associated with exactly one branch (ii) two different branches are allowed to have accounts with the same number.

42 Relational Model - Tables
According to the relational model, the database stores relations (=tables). This is the most common model in commercial systems. Our goal is to convert the ER diagram to a set of Tables The relation schema of the above relation is customer-schema = (customer-id, cust.-name, customer-street, customer-city) The actual table is a relation instance. Order of records in the table is not important. Duplicate records are NOT allowed.

43 Relational Model - Attributes
Each attribute of a relation has a name The set of allowed values for each attribute is called the domain of the attribute (e.g., the domain for the student grades attribute would be {A+, A, A-,....}). Attribute values must be atomic, that is, indivisible. Multivalued and composite attribute values are not allowed in tables, although they are permitted by the ER diagrams The special value null is a member of every domain The null value causes complications in the definition of many operations we shall ignore the effect of null values in our main presentation and consider their effect later

49 Redundancy of Tables Many-to-one and one-to-many relationship sets that are total on the many-side can be represented by adding an extra attribute to the many side, containing the primary key of the one side E.g.: Instead of creating a table for relationship account-branch, add an attribute branch-name to the entity set account

50 Redundancy of Tables (Cont.)
For one-to-one relationship sets, either side can be chosen to act as the “many” side That is, extra attribute can be added to either of the tables corresponding to the two entity sets If participation is partial on the many side, replacing a table by an extra attribute in the relation corresponding to the “many” side could result in null values The table corresponding to a relationship set linking a weak entity set to its identifying strong entity set is redundant. E.g. The payment table already contains the information that would appear in the loan-payment table (i.e., the columns loan-number and payment-number). 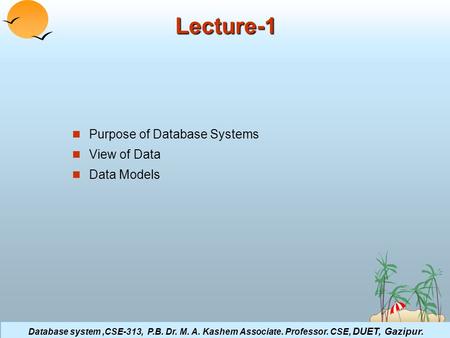 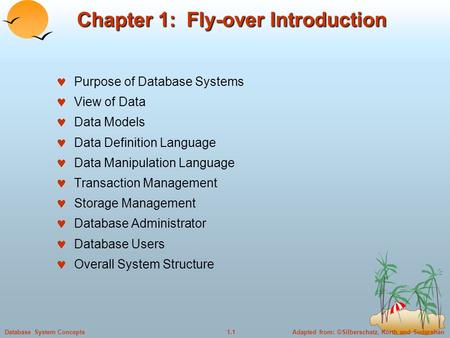 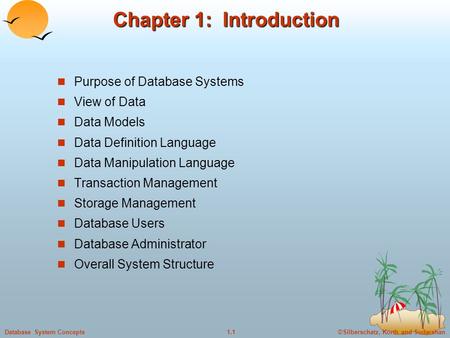 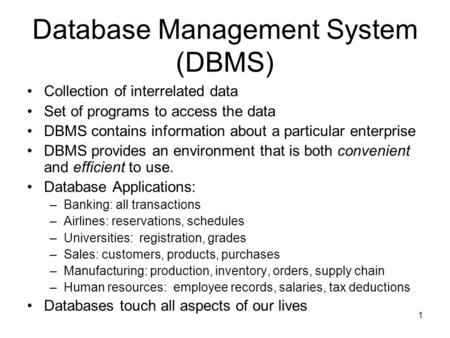 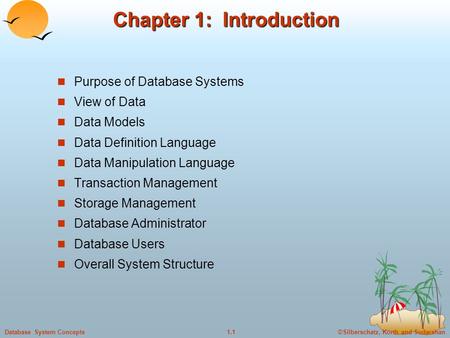 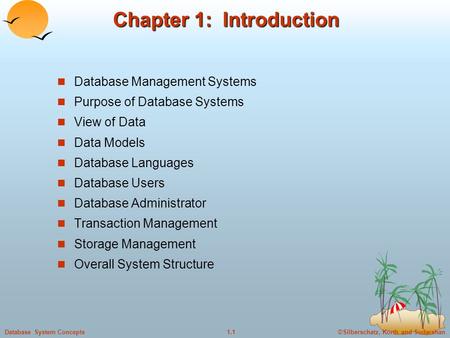 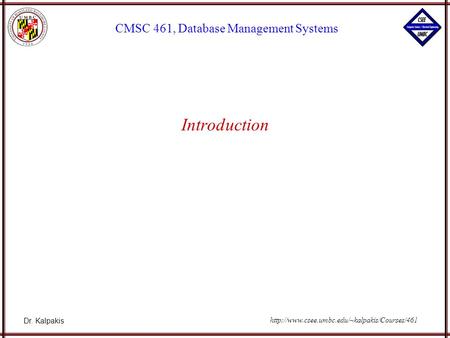 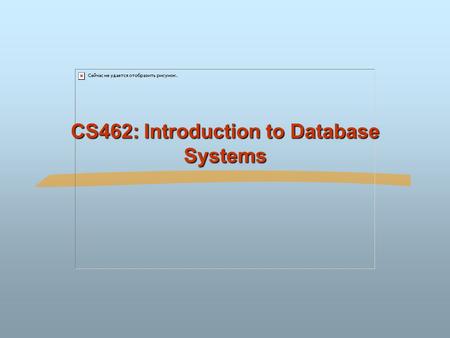 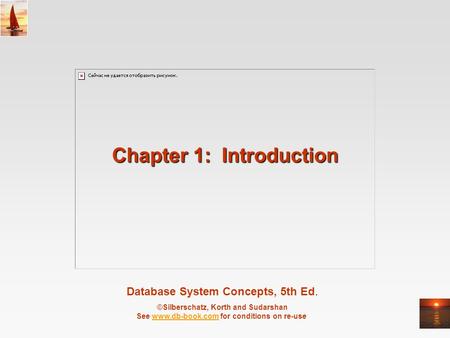