Chapter 4.1-2. New Vocabulary Crystalline structure: a structure in which particles are arranged in regular geometric patterns Mineral: a naturally occurring,

3 New Vocabulary Cleavage: how a mineral splits along planes of weakness Fracture: a break with a rough or jagged edge Streak: the color of a mineral when it is broken or powdered Specific gravity: ratio of the mass of a substance to the mass of an equal volume of water at 4  C Restricted: (write a definition in your own words)

6 Minerals from Solution 1.A solution can become supersatured, or overfilled, with a solid. Mineral crystals can precipitate, or drop out of the solution. 2. When liquid evaporates from a supersaturated solution, the elements that are left behind can arrange into crystals.

9 Mineral Identification I.Luster A. Caused by differences in chemical composition of minerals. B. Described as metallic or nonmetallic. II. Hardness A. Defined as how easily a mineral can be scratched B. Measured according to Moh’s scale of mineral hardness. III. Cleavage and Fracture A. Determined by the arrangement of a mineral’s atoms. 1. A mineral has cleavage if it spits evenly and easily along one or more flat planes 2. A mineral has fracture if it breaks with rough or jagged edges. IV. Streak A. Defined as the color of a mineral when it is broken up and powdered by rubbing across a porcelain plate. B. Used only if the mineral is softer than porcelain.

10 Mineral Identification V. Color A. Caused by trace elements or compounds. B. Milky appearance can be due to bubbles trapped in crystals. VI. Texture A. Defined as how a mineral feels to the touch. B. Described as smooth, rough, ragged, greasy, soapy, or glassy. VII. Density and Specific Gravity A. Density is a ratio of the mass of the substance divided by its volume B. Density is useful because it is not dependent on the size or shape of the mineral. C. Specific gravity is ratio of the weight of a substance to the weight of an equal volume of water at 4 o C. 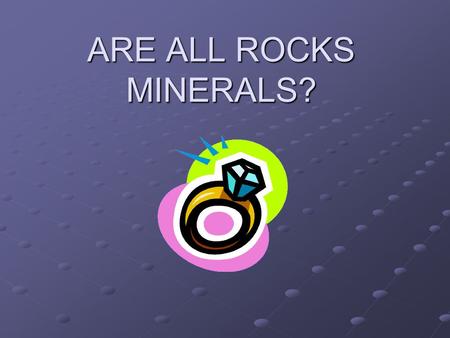 ARE ALL ROCKS MINERALS?. 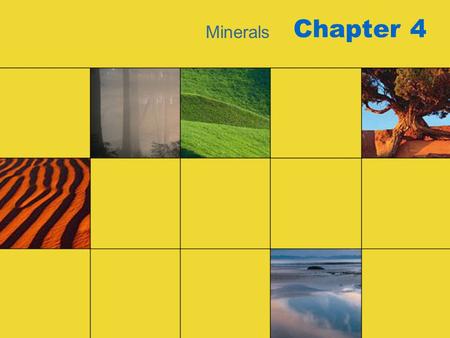 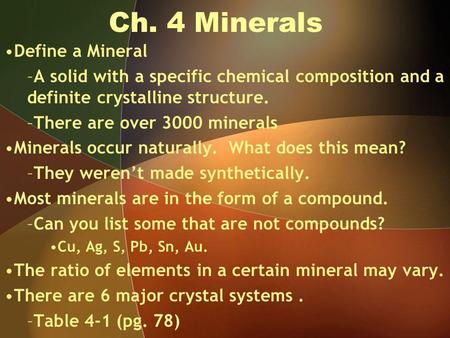 Ch. 4 Minerals Define a Mineral –A solid with a specific chemical composition and a definite crystalline structure. –There are over 3000 minerals Minerals. 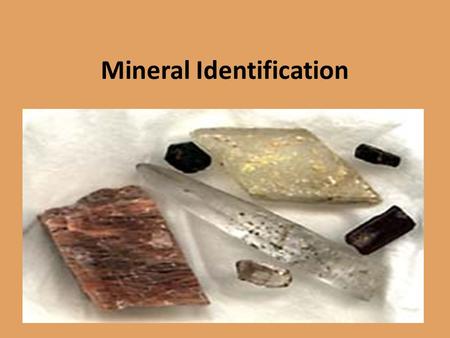 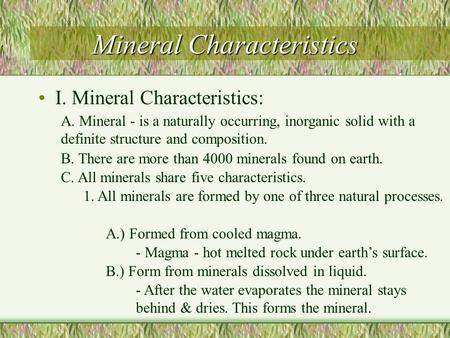 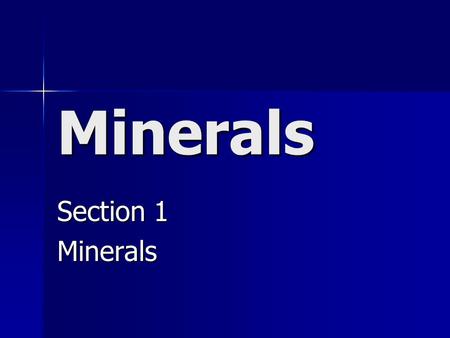 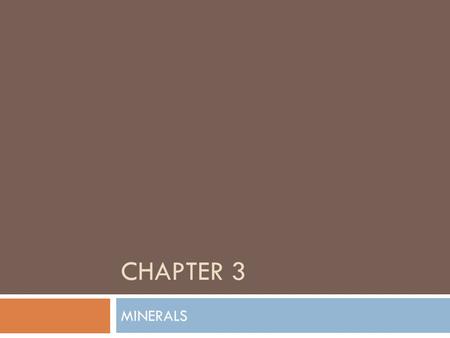 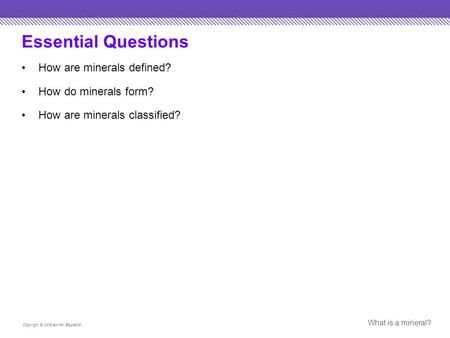 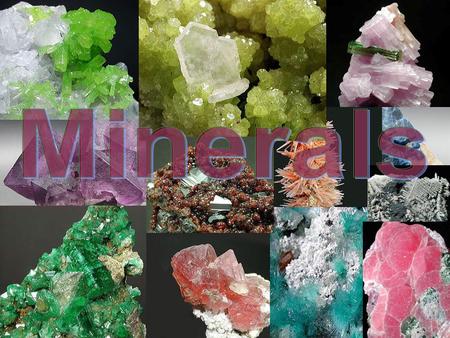 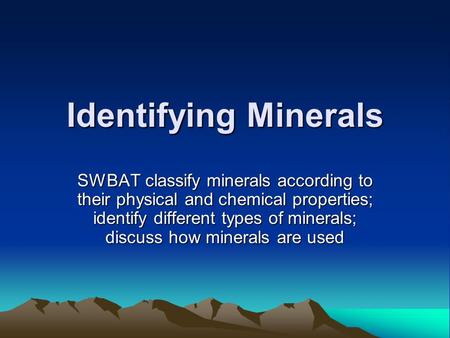 Identifying Minerals SWBAT classify minerals according to their physical and chemical properties; identify different types of minerals; discuss how minerals. 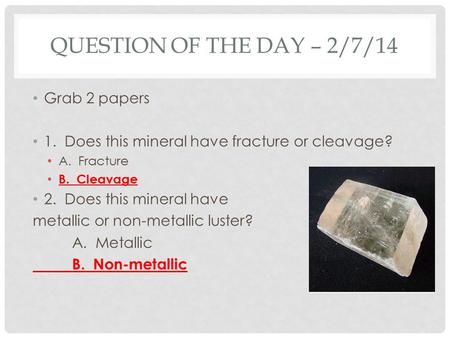 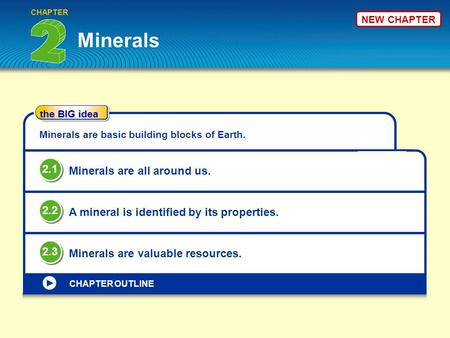 Minerals CHAPTER the BIG idea CHAPTER OUTLINE Minerals are basic building blocks of Earth. Minerals are all around us. 2.1 A mineral is identified by its. 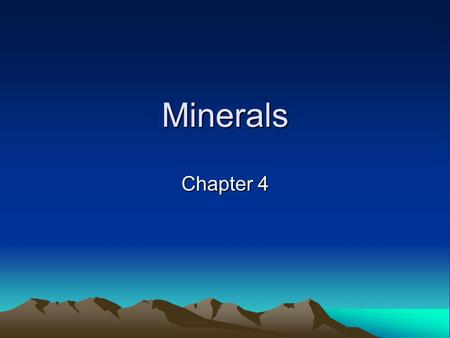 Minerals Chapter 4. What is a mineral Mineral- a naturally occurring, inorganic solid with a specific chemical composition and a definite crystalline. 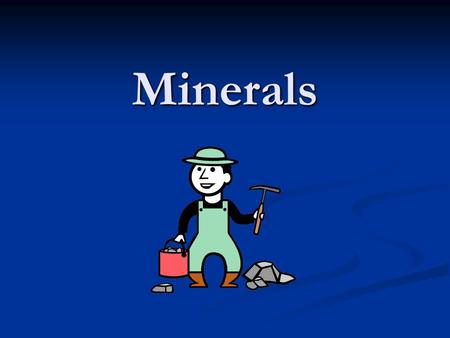 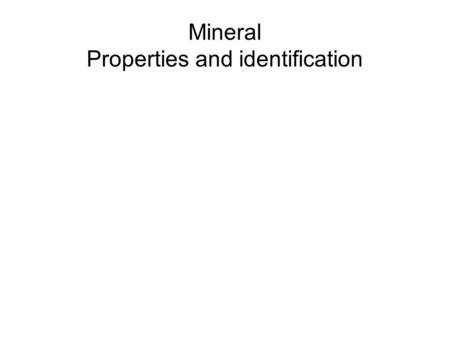 Mineral Properties and identification. Animal, Vegetable, or Mineral? Copyright © Houghton Mifflin Harcourt Publishing Company What do minerals have in. 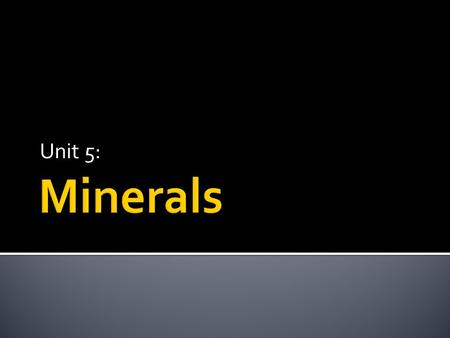 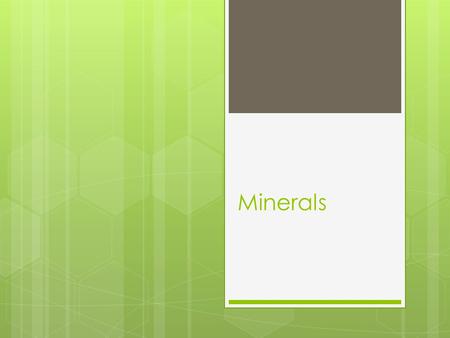 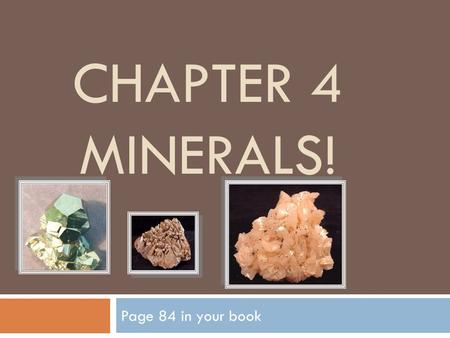 Chapter 4 Minerals! Page 84 in your book. 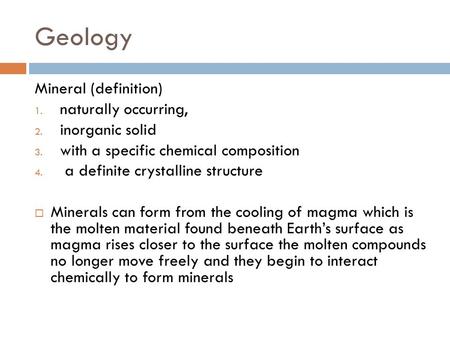 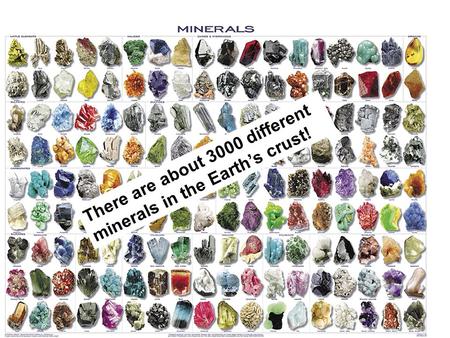 MINERALS There are about 3000 different minerals in the Earth’s crust!