2 The New Imperialism New Imperialism refers to the expansion adopted by Europe’s powers during the late nineteenth and early twentieth centuries from the Franco-Prussian War to World War I (c. 1871–1914) Imperialism should not be confused with colonialism In the early modern period Europeans largely explored, settled, and traded with the rest of the world, but did not dominate it (with the exception of Spanish America) The period is distinguished by an unprecedented pursuit of what has been termed empire for empire's sake, aggressive competition for overseas territorial acquisitions and the emergence in colonizing countries of doctrines of racial superiority which denied the fitness of subjugated peoples for self-government

4 The Scramble for Africa
The most rapid expansion of European power took place in Africa Little knowledge of African interior until after 1870 Disease; geographical barriers Exploration and conquest of interior touched off by actions of King Leopold II of Belgium Leopold formed the International Association for the Exploration and Civilization of Central Africa and sent Henry Stanley ( ) to the Congo to secure trading and territorial rights (Stanley had earlier become famous for his mission to the African interior to rescue David Livingstone, a missionary explorer) The French responded by claiming their own territory beginning a chain reaction

7 The Berlin Conference In response to growing tensions, Bismarck and Jules Ferry (the premier of France) called a conference in Berlin in 1884 They sought to establish a peaceful plan for the development of southern Africa To claim a territory, they ruled, a nation had to occupy that territory Granted Leopold personal rights to the Congo Free State; he virtually enslaved the population for economic gain (ivory, rubber) Led to a rapid conquest with no attention paid to natural or cultural boundaries

8 Leopold’s Treatment of Africans
This 1908 English cartoon, "Leopold, King of the Congo, in his native dress," focuses on the barbaric practice of cutting off the hands and feet of Africans who refused to gather as much rubber as Leopold's company demanded. In 1908 an international human rights campaign forced the Belgian king to cede his personal fief to the Belgian state.

9 The British in (north) Africa
British interest in Africa began in 1869 with the opening of the Suez Canal Gained control of Egypt in 1882 through occupation (promised to leave but never did) The British added to their territory by moving against a Muslim war resisting them in Sudan Led by Muhammad Ahmad Mahdi, captured Khartoum and killed the British general there, Charles Gordon Resulted in a massive British response and the massacre at Omdurman (machine guns) The French were also pushed back by the British at Fashoda

10 The British in (southern) Africa
British expansion in southern Africa began in South Africa (already a British colony) through the work of Cecil Rhodes ( ) Solidified British rule by acquiring Rhodesia and getting England involved in a war against the Boers The Boers, Dutch settlers dating back to the 17th century, had moved north (the Great Trek, ) to avoid British rule Established two republics – the Transvaal and the Orange Free State Anglo-Boer War ( ) English won at great cost; Boers territories joined to British territory to form the Union of South Africa in 1910

11 Other Nations in Africa
The cost of African imperial possessions was high for most nations Italians defeated at Adowa (1896) in Ethiopia ended their dreams of imperial expansion Germans administered their colonies efficiently but gained little (Nambia, Tanzania, Cameroon, Togo) Belgian debacle in the Congo cost them more in terms of pride than it gained them economically

12 Legacy and Conclusions
The rise of the principle of self-determination First seized upon by smaller European countries, now picked up by African and Asian nations Resentment and suspicion of the West Eventual discrediting of racism and western political dominance Accelerated growth of global economy Spread western ideas (languages, democracy, socialism, industrialization, modern science) 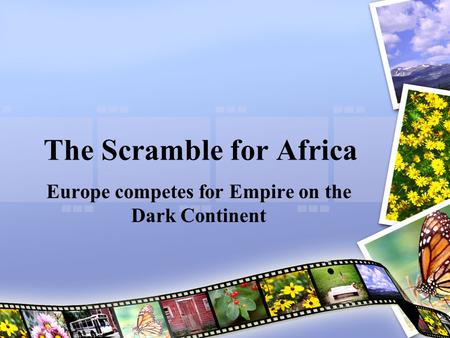 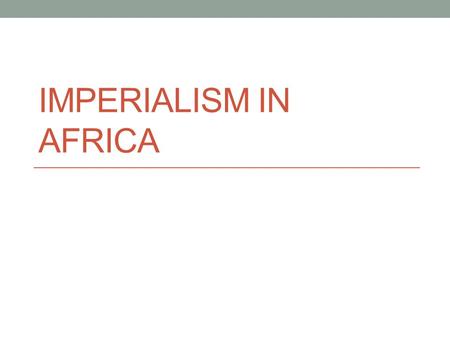 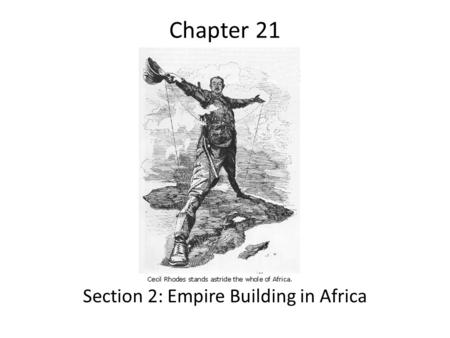