2 Problem Description Given a data stream of n insertions of records, count the number F 0 of distinct records One pass over the data stream Algorithms must use small amount of memory and have fast update time –too expensive to store set of distinct records –implies algorithms must be randomized and must settle for an approximate solution: output F 2 [(1- ² )F 0, (1+ ² )F 0 ] with constant probability

3 The Data Stream How is the data in the stream organized? –Usually, assume worst-case ordered In this case, £ (1/ ² 2 ) bits are necessary and sufficient to estimate F 0 –As the quality of approximation improves to say, ² = 1%, the quadratic dependence is a major drawback –Sometimes a random-ordering can be assumed Suppose we are mining salaries, and they are ordered alphabetically by surname. If there is no correlation between salaries and surname, then the stream of salaries is ordered randomly The backing sample architecture assumes data randomly ordered by design (Gibbons, Matias, Poosala) This model is referred to as the Random-Order Model (Guha, McGregor) Unfortunately, even in this model, we still need (1/ ² 2 ) bits to estimate F 0 (Chakrabarti, Cormode, McGregor). Intuitively this is because the data is still worst-case.

4 Random Data Model In an attempt to bypass the (1/ ² 2 ) bound, we propose to study the case when the data comes from an underlying distribution. –Problem 3 of Muthukrishnans book: Provide inproved estimates for L p sums including distinct element estimation if input stream has statistical properties such as being Zipfian. There is a distribution defined by probabilities p i, 1 · i · m, p i = 1. The next item in the stream is chosen independently of previous items, and is i with probability p i. We call this the Random-Data Model. The Random-Data Model is contained in the Random-Order Model.

5 Random Data Model This model for F 0 was implicitly studied before –by Motwani and Vassilvitskii when the distribution is Zipfian. This distribution is useful for estimating WebGraph statistics –sampling-based algorithms used in practice impose distributional assumptions, without which they have poor performance (Charikar et al) –Generalized Inverse Gaussian Poisson (GIGP) model studies sampling- based estimators when distribution is uniform and Zipfian –by Guha and McGregor for estimating the density function of an unknown distribution, which is useful in learning theory

6 Further Restriction We focus on the case when each probability p i = 1/d for an unknown value of d (so uniform over a subset of [m]) Captures the setting of sampling with replacement a set of unknown cardinality For a certain range of d, we show that one can beat the space lower bound that holds for adversarial data and randomly-ordered data For another choice of d, we show the lower bound for adversarial and randomly-ordered data also applies in this setting Distribution fairly robust in the sense that other distributions with a few heavy items and remaining items that are approximately uniform have the same properties above

7 Our Upper Bound 1-pass algorithm with an expected O(d(log 1/ ² )/(n ² 2 ) + log m) bits of space, whenever d ¸ 1/ ² 2 and d · n. The per-item processing time is constant. Recall the distribution is uniform over a d-element subset of [m], and we see n samples from it, so this is a typical setting of parameters. Notice for n even slightly larger than d, the algorithm does much better than the (1/ ² 2 ) lower bound in other data stream models. One can show for every combination of known algorithms with different space/time tradeoffs for F 0 in the adversarial model, our algorithm is either better in space or in time.

8 Our Lower Bound Our main technical result is that if n and d are £ (1/ ² 2 ), then even estimating F 0 in the random data model requires (1/ ² 2 ) space Lower bound subsumes previous lower bounds, showing that even for a natural (random) choice of data, the problem is hard Our choice of distribution for showing the lower bound was used in subsequent work by Chakrabarti and Brody, which turned out to be useful for establishing an (1/ ² 2 ) lower bound for constant pass algorithms for estimating F 0

9 Techniques: Upper Bound Very simple observation: –Since d · n, each item should have frequency n/d in the stream. –If n/d is at least (1/ ² 2 ), we can just compute n and the frequency of the first item in the stream to get a (1+ ² )-approximation to d –Using a balls-and-bins occupancy bound of Kamath et al, a good estimation of d implies a good estimation to F 0 If n/d is less than 1/ ² 2, we could instead store the first O(1/ ² 2 ) items (hashed appropriately for small space), treat them as a set S, and count the number of items in the remaining part of the stream that land in S –Correct, but unnecessary if d is much less than n.

22 Conclusions Introduced random data model, and studied F 0 -estimation under distributions uniform over a subset of d items For a certain range of d, we show that one can beat the space lower bound that holds for adversarial data and randomly-ordered data For another choice of d, we show the lower bound for adversarial and randomly-ordered data also applies in this setting Are there other natural distributions that admit more space-efficient algorithms in this model? Are there other useful ways of bypassing the (1/ ² 2 ) lower bound? 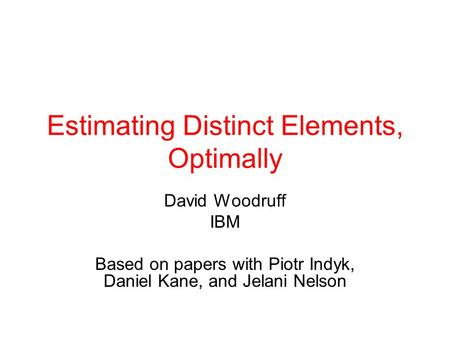 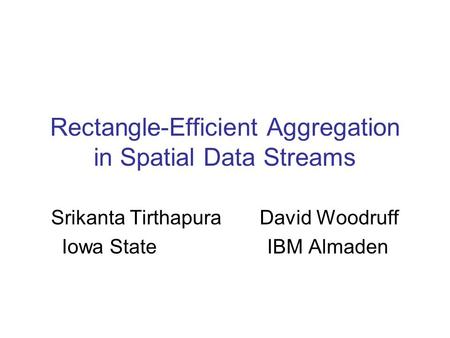 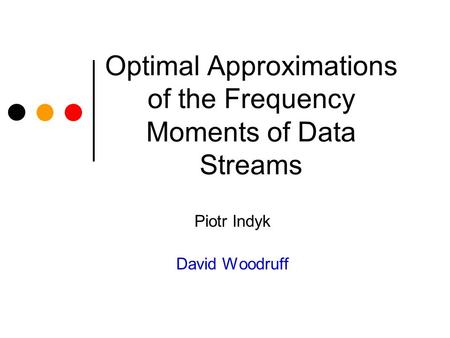 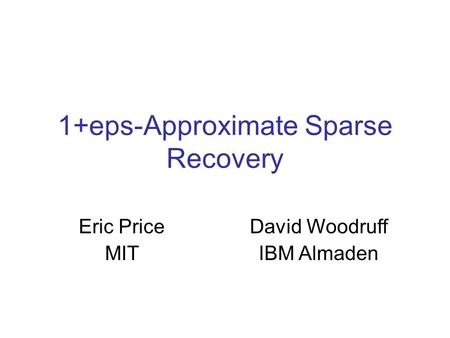 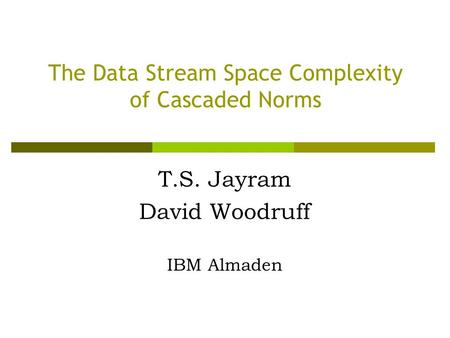 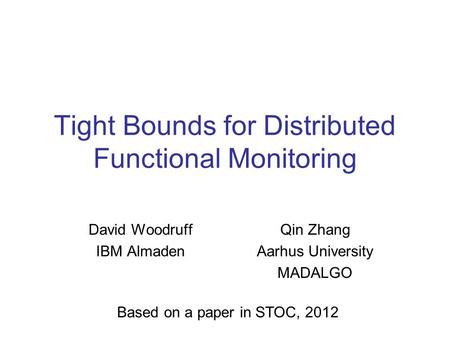 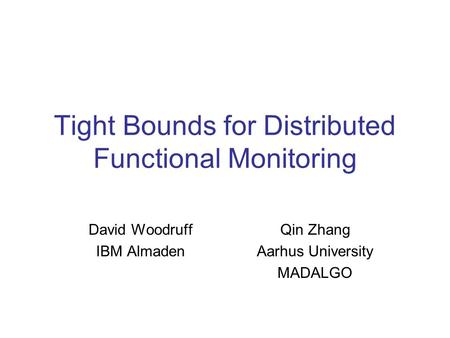 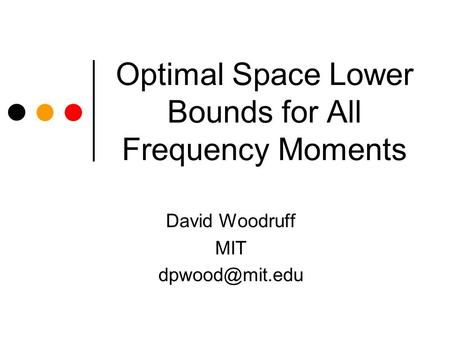 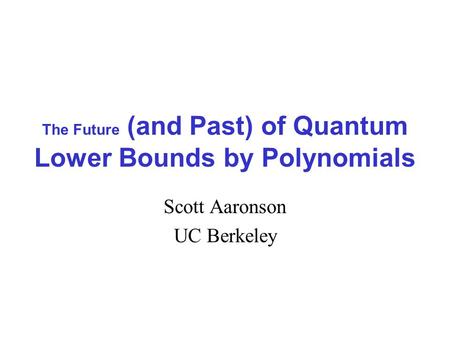 The Future (and Past) of Quantum Lower Bounds by Polynomials Scott Aaronson UC Berkeley. 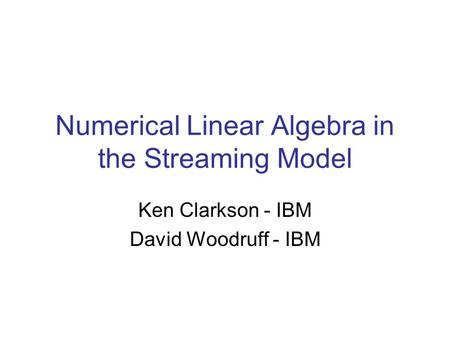 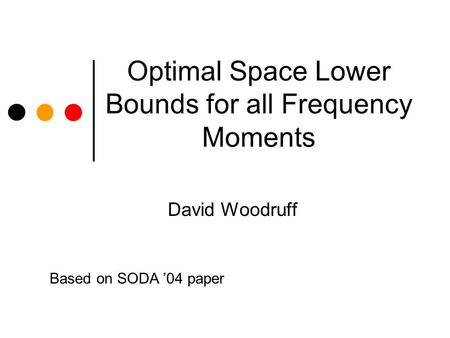 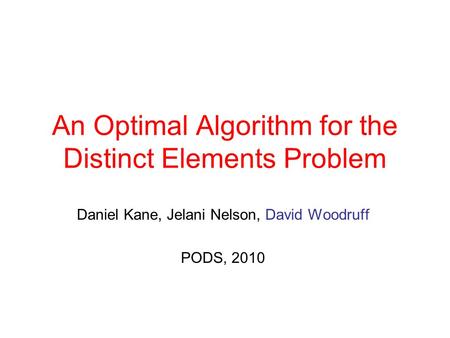 An Optimal Algorithm for the Distinct Elements Problem 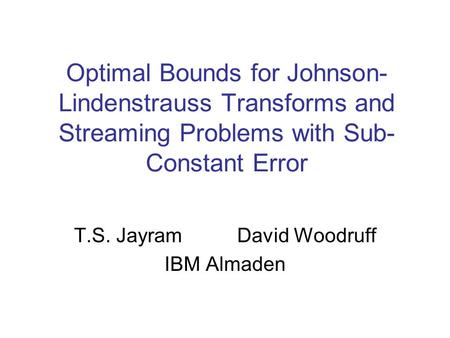 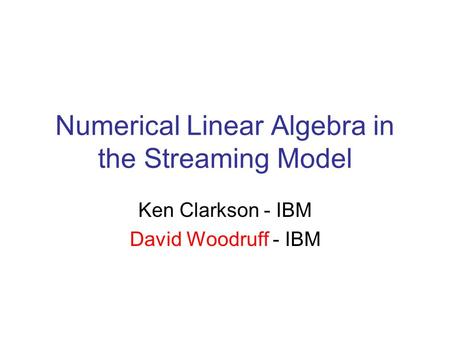 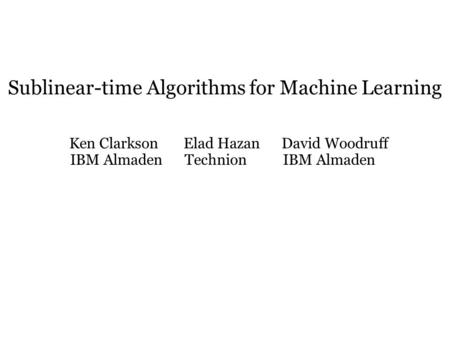 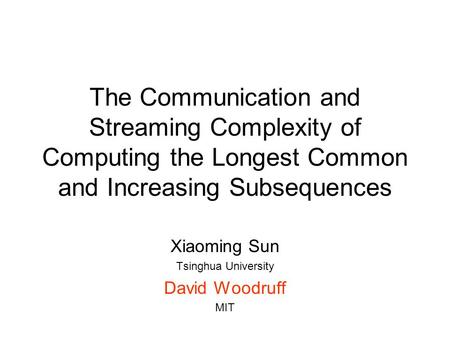 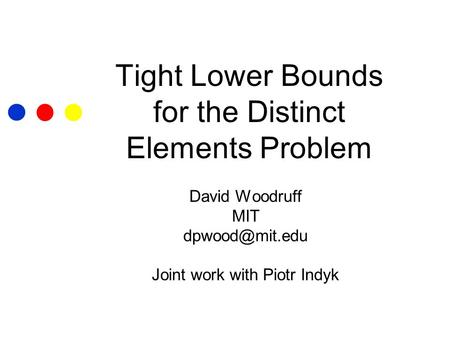 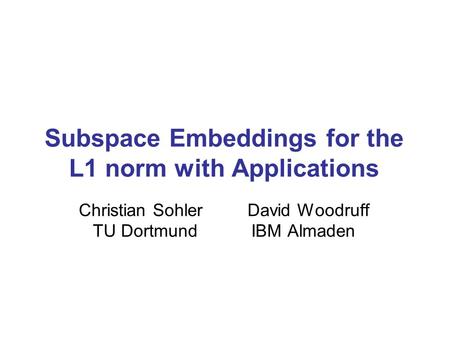 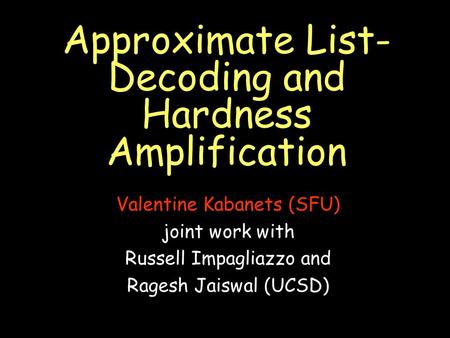 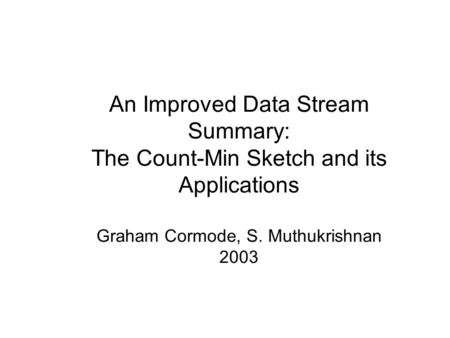