2 What is Web services ? A web service is any piece of software that makes itself available over the internet and uses a standardized XML messaging system. Web Services are intended to provide global distributed applications through which an inventory system in Singapore can be combined with an order processing system in London to handle orders placed by someone in Chicago.

4 Web Services Interactions Because all communication is in XML, web services are not tied to any one operating system or programming language

5 Advantages of Web Services Web services provide interoperability between various software applications running on disparate platforms. By utilizing HTTP, web services can work through many common firewall security measures without requiring changes to the firewall filtering rules. Other forms of RPC may more often be blocked. Web services allow software and services from different companies and locations to be combined easily to provide an integrated service.

10 UDDI UDDI (Universal Description, Discovery and Integration) The UDDI Project is an industry initiative that is working to enable businesses to quickly, easily, and dynamically find and transact with one another. UDDI provides a yellow pages directory for Web Services so that the potential users (clients/consumers) can locate the needed services.

11 WSDL WSDL (XML Web Services Description Language) Its an XML Based Language for describing web services and how to access them WSDL contain information about what Web Service does, how it communicates, and where it resides It is used by the client to open and access the Web Service

13 XML and HTTP XML & HTTP are the core open Internet technologies that are the foundation of XML Web Services.

16 How to use and create A web serivce  You have to have jdk 1.5 installed on the machine  Next you download java Web Services Developer Pack 2.0 (Java WSDP)  Used to build, test and deploy XML applications, Web services, and Web applications WSDP includes: –Java APIs for XML (JAX) that are in the Java XML Pack –Apache Tomcat server –And Other components needed to provide a fully functional environment for developing and testing Web services  OR You can install j2EE which has all of this bundled including the (Sun Java System Application Server PE 8.2 Web Container)

20 the Java API for XML- based RPC (JAX-RPC) uses the SOAP standard and HTTP, so client programs can make XML-based remote procedure calls (RPCs) over the Internet JAX-RPC also supports WSDL, so you can import and export WSDL documents With JAX-RPC and a WSDL, you can easily interoperate with clients and services running on Java-based or non- Java-based platforms such as.NET. For example,

21 SOAP with Attachments API for Java (SAAJ) is a low-level API on which JAX- RPC depends SAAJ enables the production and consumption of messages that conform to the SOAP 1.1 specification Most developers do not use the SAAJ API, instead using the higher-level JAX-RPC API.

23 Finally Web Services is becoming more and more widely spread due to the need for distributed computing and the availability of a more reliable internet. It also decreases the amount of programming needed letting developers focus more on the business logic. 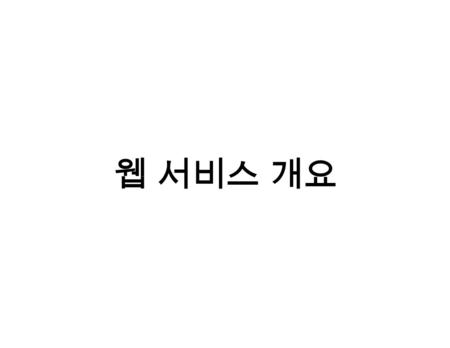 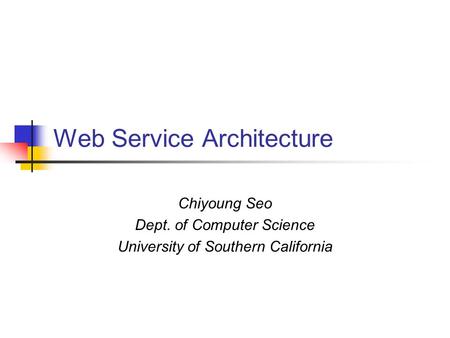 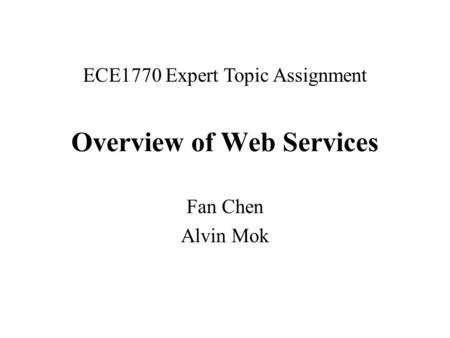 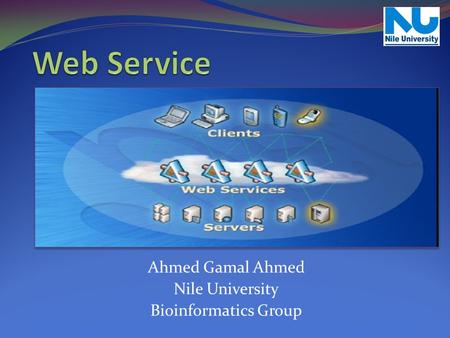 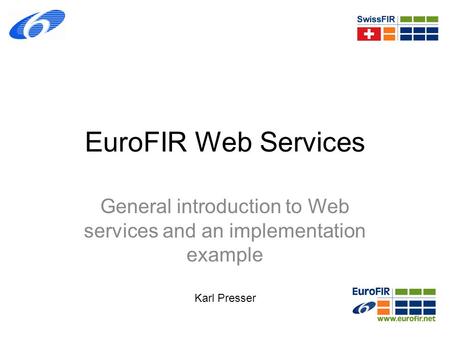 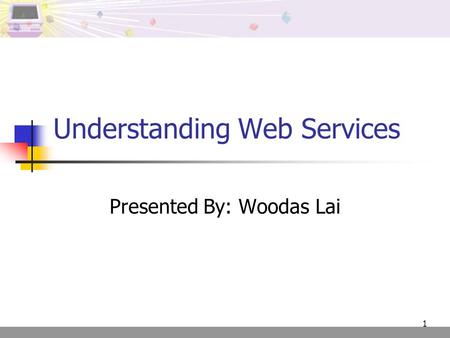 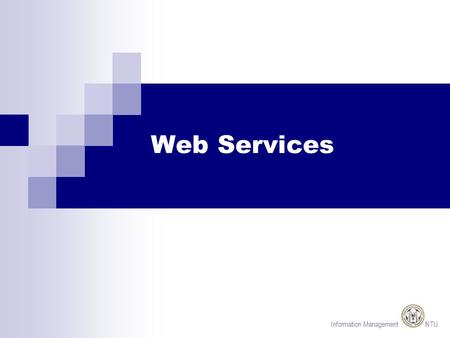 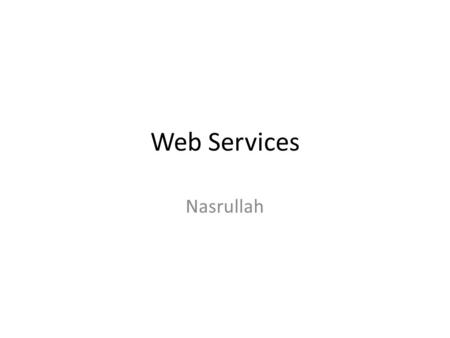 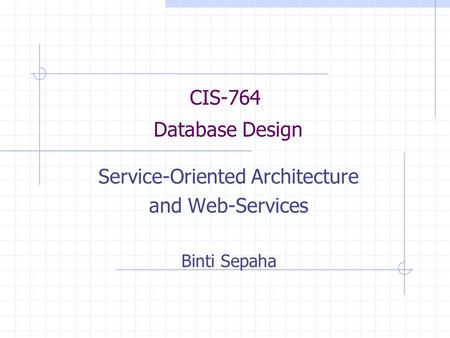 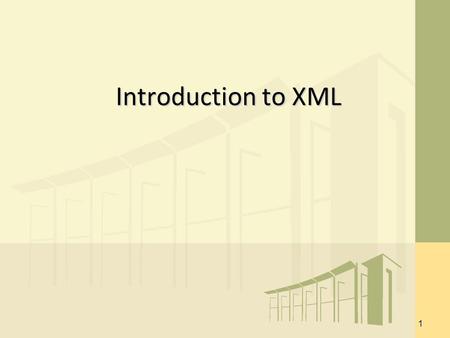 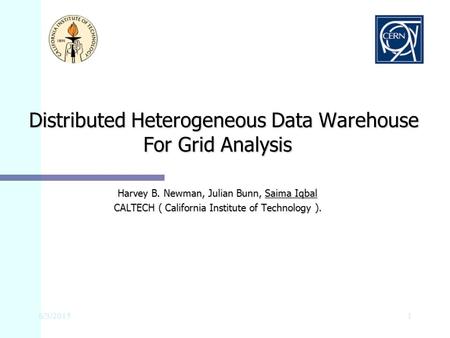 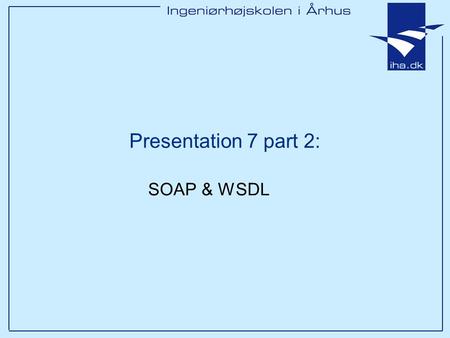 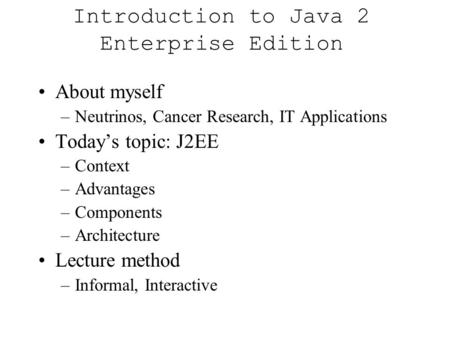 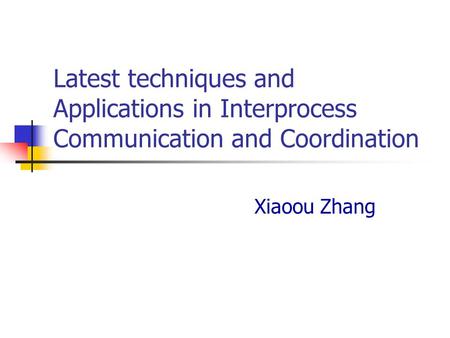 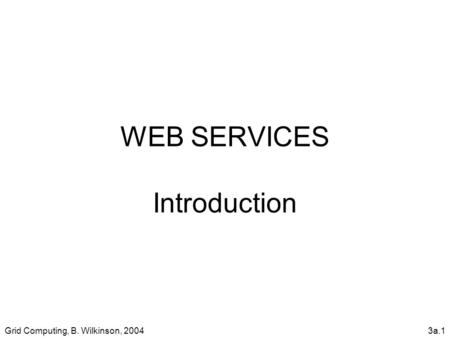 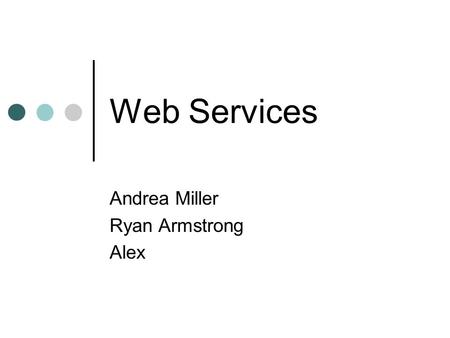 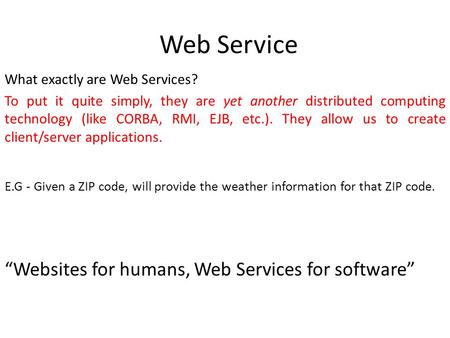 Web Service What exactly are Web Services? To put it quite simply, they are yet another distributed computing technology (like CORBA, RMI, EJB, etc.). 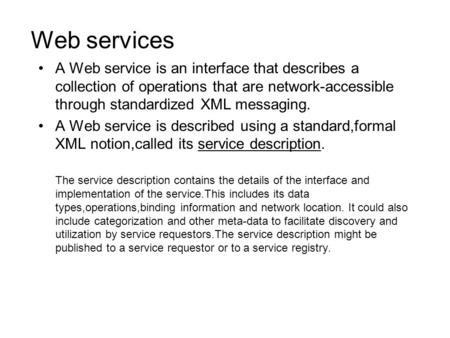 Web services A Web service is an interface that describes a collection of operations that are network-accessible through standardized XML messaging. A. 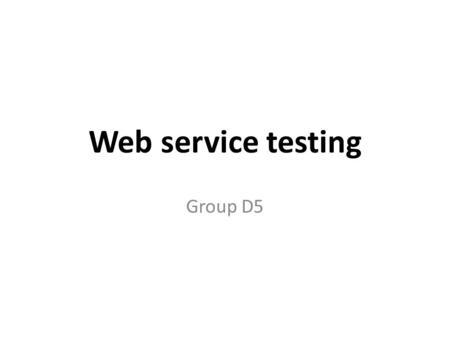 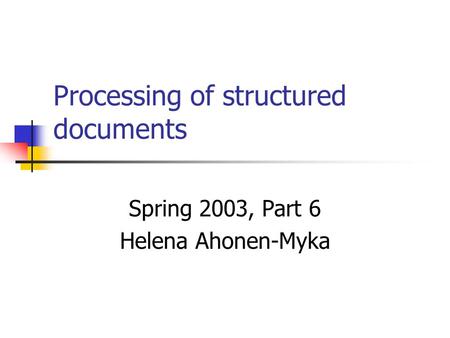