Presentation on theme: "The Judicial Branch The Federal Courts and the Supreme Court."— Presentation transcript:

1 The Judicial Branch The Federal Courts and the Supreme Court

6 Federal Court Jurisdiction Jurisdiction is the authority of a court to hear a case. This is determined by the subject matter, parties involved 1.Original jurisdiction - the court where case is first heard 2.Appellate - hears cases on appeal

8 Terms and Pay For life (until retire, resign, or dies) Removed only through impeachment Congress sets judges pay; retirement is very generous

11 How Cases Get to SC Most cases: Federal District Courts --> Federal appeals court -->Supreme Court Certificate - lower court asks for help from Supreme Court Supreme Court may remand a case, which means it sends the case back allowing the lower court ruling to stand However if four justices agree to hear the case it goes before the Supreme Court. Rule of 4

12 How Cases Get to SC Supreme Court reviews the case record. This is called the Writ of Certiorari (to be made more certain) The court is petitioned to hear 7,500 cases per year but only 90-100 are heard by Supreme Court

13 Operation of Supreme Court 1.Oral arguments 2.Briefs - written arguments from solicitor general (chief lawyer of country) 3.Court in conference - after arguments are heard the court meets in private to discuss and debate

16 Strict vs. Broad Constuctionism Strict Constructionism - judges who believe that decisions should be made with strict adherence to original constitutional principles. Sometimes they are called “originalists.” or conservative judges. Broad constructionism- judges who look at historical context and purpose of the law. (e.g. The Warren Court on Civil Rights), not just the letter of the law.

18 Conservative and Liberal Judges Although judicial activism and broad constructivist rulings are often associated with liberal judges (e.g. Warren Court), increasingly it is being argued that strict constructionist judges may also be judicial activists. (e.g. the Rehnquist Court) and current conservative Supreme Court Justices who seek to overturn legislative rulings they disagree with.

Download ppt "The Judicial Branch The Federal Courts and the Supreme Court." 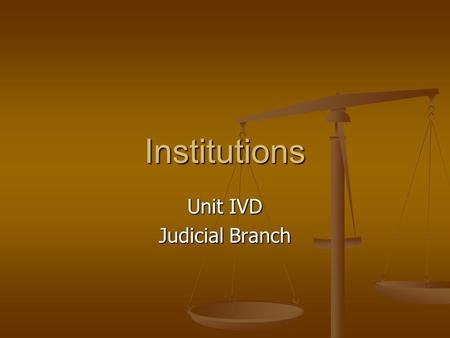