2 Did You Know? In 1997 the United States government decided to mint a new dollar coin featuring a woman. Some of the women nominated by citizens to grace the coin included civil rights activists Rosa Parks and Sojourner Truth, first ladies Martha Washington and Eleanor Roosevelt, and poet Emma Lazarus, among others. The winner? Sacagawea, the Native American woman who helped lead explorers Lewis and Clark westward.

3 Americans Settlers Move West
In the early 1800s, thousands of Americans settled in the area between the Appalachians and the Mississippi River. The pioneers loaded their belongings onto Conestoga wagons and made the long, tiring journey over the Appalachian Mountains to the area west of the Mississippi River known as the Louisiana Territory. As the region’s population grew, Kentucky, Tennessee, and Ohio were admitted into the Union.

5 A Secret Agreement In 1802 Spain changed its policy and refused to allow American goods to move into or past New Orleans. Jefferson confirmed that Spain had transferred the Louisiana Territory to France in a secret agreement. The United States was surprised and fearful that Napoleon Bonaparte, France’s leader, wanted to increase his empire in Europe and the Americas.

6 Napoleon and Louisiana
France was led by Napoleon Bonaparte, a powerful ruler who had conquered most of Europe. Napoleon wanted to build a world wide empire and expand part of it to North America.

7 Napoleon’s Plans Napoleon had a plan to use the colony of Haiti (in the Caribbean), as a supply base. However, enslaved Africans had revolted and freed themselves from French rule. Napoleon sent soldiers to regain control, but they were defeated in 1802. This defeat ended Napoleon’s plans to expand to North America.

8 The Nation Expands The United States bought the Louisiana Territory from France, not just New Orleans. The French need money to finance Napoleon’s plans for war against Britain, so while American diplomats were in France, French foreign minister Charles de Talleyrand informed them that the entire Louisiana Territory was for sale. A price of $15 million was negotiated for the territory. With the purchase, the size of the United States doubled.

11 Lewis and Clark Jefferson saw the expedition as a scientific adventure, while Congress was interested in commercial possibilities and places for future posts. Lewis and Clark put together the Corps of Discovery and left St. Louis in the spring of 1804. Along the way they kept a journal of valuable information on people, plants, animals, and geography of the West. After traveling nearly 4,000 miles in 18 months, they reached the Pacific Ocean.

14 Sacagawea Sacagawea was the wife of a French fur trapper by the name of Toussaint Charbonneau. Sacagawea also helped he expedition by naming plants and by gathering edible fruits and vegetables for the group.

16 Zebulon Pike Jefferson sent another expedition to explore the wilderness. Lieutenant Zebulon Pike led two expeditions into a region that is now Colorado. There he found a snowcapped mountain he called Grand Peak. Today it is called Pikes Peak. 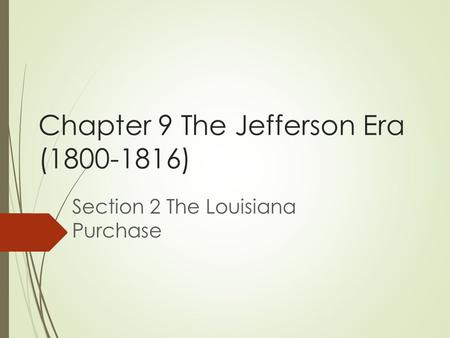