8 The Hundred Years’ War France vs. England
On and off from 1337 – 1453 A.D. Fighting over French throne Style of warfare changes

9 Progression of the Hundred Years War
So really, what changed geographically?

11 How did the longbow “kill” knights and Feudalism?

12 Joan of Arc A young French girl… Inspires France
Leads the French army to victory (dressed as a man) Kicks the English out of France Is captured, sold to the English, and burned at the stake as a witch! All by the age of nineteen! Joan of Arc

13 Impact of the Hundred Years’ War
Page 403 Feeling of nationalism emerged in England and France – King a national leader, fighting for the nation power and prestige of French monarch increased English fell into War of the Roses, in which two noble houses fought for the throne * Hundred Years’ War marks the “end” of the Middle Ages

14 Factors leading to the end of Feudalism
The Crusades helped by uniting the knights against a common enemy. The Magna Carta limited the power of kings. But the main factor in the end of feudalism though was the Black Death. Dang you Magna Carta… I used to be so buff!

15 Job Specialization As with most medieval cultures, most Europeans were farmers. As time went on though more and more jobs were available. People could start making money and no longer had to rely so heavily on the feudal lords. 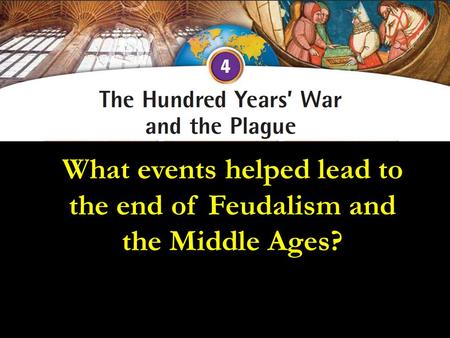 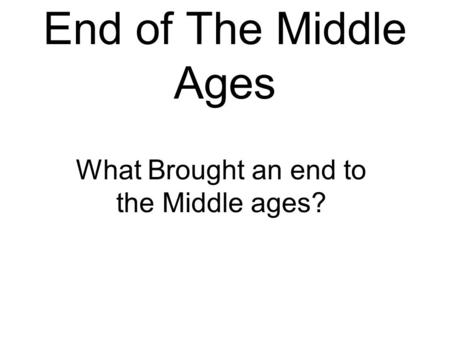