3 Chart 3.2 Survey measures of global manufacturing output growth (a) Sources: JPMorgan Chase & Co., Markit Economics, Thomson Reuters Datastream and US Institute for Supply Management (ISM). (a) A figure over 50 indicates rising output, compared with the previous month, and a figure below 50 indicates falling output. (b) Based on the results of surveys in 30 countries, accounting for an estimated 86% of global manufacturing output.

5 Chart 3.4 Private sector employment and surveys of employment intentions Sources: Bank of England, BCC, CBI, CBI/PwC, Manpower, ONS (including the Labour Force Survey) and Bank calculations. (a)Data are to 2011 Q4. Measures for the Bank’s Agents (manufacturing and services), the BCC (non-services and services) and the CBI (manufacturing, financial services and business/consumer services) are weighted together using employee shares from Workforce Jobs. The BCC data are non seasonally adjusted. The Manpower data cover the whole economy. (b)Percentage change on a quarter earlier. Data are to 2011 Q3. Calculated as the difference between LFS whole-economy employment and total public sector employment from the ONS public sector employment release, adjusted to be on a calendar-quarter basis.

7 Chart 3.6 Unemployment rates (a) Source: ONS (including the Labour Force Survey). (a)Rolling three-month measures unless otherwise stated. (b)Recessions are defined as at least two consecutive quarters of falling output (at constant market prices) estimated using the latest data. The recessions are assumed to have ended once output began to rise. (c)Defined as those people who have been unemployed for more than twelve months divided by the economically active population. Data prior to 1992 are based on non seasonally adjusted, annual LFS microdata. These annual observations correspond to the March-May quarter.

8 Chart 3.7 Flows from unemployment to employment (a) Sources: Labour Force Survey and Bank calculations. (a)Based on LFS microdata that have been seasonally adjusted by Bank staff. Data are to 2011 Q3 and based on the 16–64 population. (b)Flows into LFS employment by those who had been unemployed for fewer (more) than twelve months divided by the number of people who were unemployed for fewer (more) than twelve months in the previous quarter.

9 Chart 3.8 Inactivity rate (a) Source: ONS (including the Labour Force Survey). (a)Those aged 16 or above who are economically inactive as a proportion of the total population aged 16+. Rolling three-month measure. (b)Recessions are defined as in Chart 3.6.

10 Chart 3.9 Unemployment and vacancies (a) Source: ONS (including the Labour Force Survey). (a)Quarterly data except for the final data point, which shows data for the three months to November 2011. Vacancies exclude agriculture, forestry and fishing.

11 Chart 3.10 Survey measures of capacity utilisation (a) Sources: Bank of England, BCC, CBI, CBI/PwC and ONS. (a)Three measures are produced by weighting together surveys from the Bank’s Agents (manufacturing and services), the BCC (non-services and services) and the CBI (manufacturing, financial services, business/consumer services and distributive trades) using nominal shares in value added. The BCC data are non seasonally adjusted.

12 Chart 3.11 Survey measures of companies’ cash flow (a) Source: BCC. (a)The net percentage balance of respondents reporting that cash flow had ‘improved’ relative to ‘worsened’ over the past three months. The data are non seasonally adjusted.

14 Table 3.A Changes in part-time employment by reason for working part-time Source: Labour Force Survey. (a) Based on the average of quarterly data for 2011 Q1 to Q3 and data for the three months to November. (b) Includes those who are ill or disabled, students and those who gave no reason. (c) Numbers may not sum to totals due to rounding.

15 Table 3.B Survey indicators of recruitment difficulties Sources: Bank of England, BCC, CBI, CBI/PwC and ONS. (a) Unless otherwise stated. (b) End-quarter observations on a scale of -5 to +5, with positive scores indicating greater recruitment difficulties in the most recent three months compared with the situation a year earlier. (c) Percentage of respondents reporting recruitment difficulties over the past three months. Non seasonally adjusted. Services and non-services balances are weighted using employee jobs shares from Workforce Jobs. (d) Balances of respondents expecting skilled/unskilled labour to limit output/business over the next three months (in the manufacturing sector) or over the next twelve months (in the financial, business and consumer services sectors), weighted using employee jobs shares from Workforce Jobs. Averages are since 1998 Q4.

16 How widespread has the weakness in productivity growth been?

17 (a)Output per hour. (b)Continuations of pre-recession trends are calculated by projecting forward labour productivity from 2008 Q2 using the average quarterly growth rate between 1997 Q2 and 2008 Q1. Chart A Whole-economy and sectoral labour productivity (a) 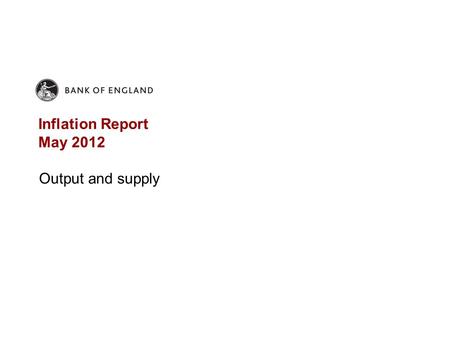 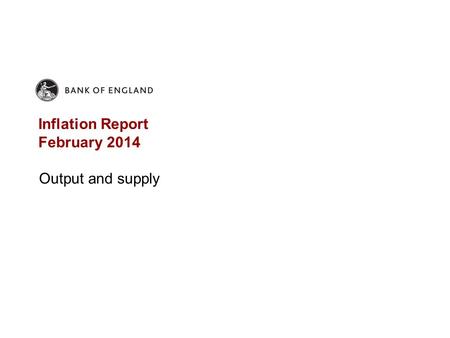 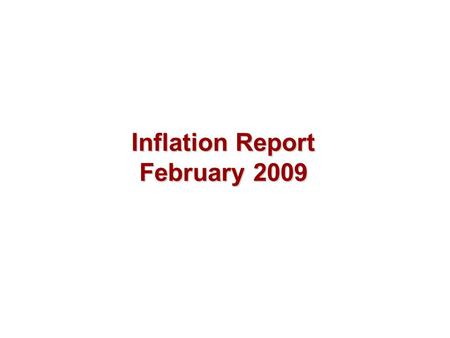 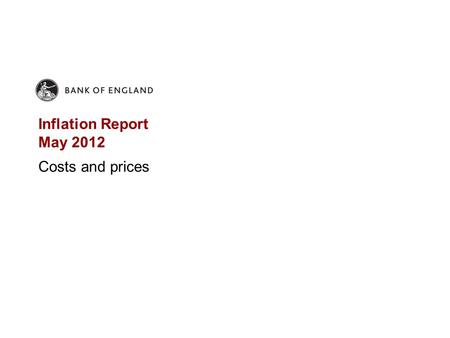 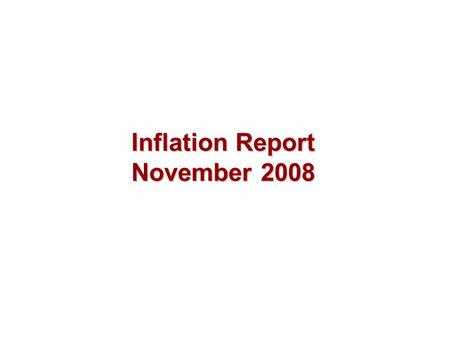 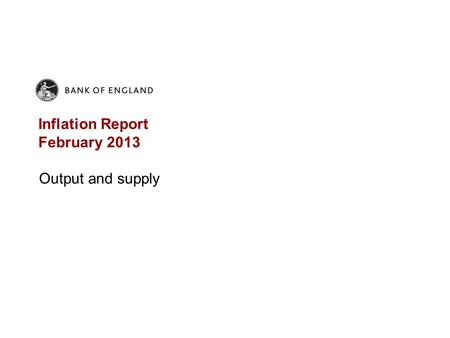