5 Agile methods  Dissatisfaction with the overheads involved in software design methods of the 1980s and 1990s led to the creation of agile methods. These methods:  Focus on the code rather than the design  Are based on an iterative approach to software development  Are intended to deliver working software quickly and evolve quickly to meet changing requirements.  The aim of agile methods is to reduce overheads in the software process (e.g. by limiting documentation) and to be able to respond quickly to changing requirements without excessive rework. 5Chapter 3 Agile software development

6 Agile manifesto  We are uncovering better ways of developing software by doing it and helping others do it. Through this work we have come to value:  Individuals and interactions over processes and tools Working software over comprehensive documentation Customer collaboration over contract negotiation Responding to change over following a plan  That is, while there is value in the items on the right, we value the items on the left more. Chapter 3 Agile software development6

7 The principles of agile methods PrincipleDescription Customer involvementCustomers should be closely involved throughout the development process. Their role is provide and prioritize new system requirements and to evaluate the iterations of the system. Incremental deliveryThe software is developed in increments with the customer specifying the requirements to be included in each increment. People not processThe skills of the development team should be recognized and exploited. Team members should be left to develop their own ways of working without prescriptive processes. Embrace changeExpect the system requirements to change and so design the system to accommodate these changes. Maintain simplicityFocus on simplicity in both the software being developed and in the development process. Wherever possible, actively work to eliminate complexity from the system. 7Chapter 3 Agile software development

8 Extreme Programming  Perhaps the best-known and most widely used agile method.  Extreme Programming (XP) takes an ‘extreme’ approach to iterative development.  New versions may be built several times per day;  Increments are delivered to customers every 2 weeks;  All tests must be run for every build and the build is only accepted if tests run successfully. 8Chapter 3 Agile software development

11 Extreme Programming (cont.)  XP project begins with user stories that describe what the system needs to do  Programmers code in small, simple modules and test to meet those needs  Users are required to be available to clear up questions and issues  Standards are very important to minimize confusion  XP projects deliver results sooner than even the RAD approaches Chapter 3 Agile software development11

13 Testing in XP  Testing is central to XP and XP has developed an approach where the program is tested after every change has been made.  XP testing features:  Test-first development.  User involvement in test development and validation.  Automated test harnesses are used to run all component tests each time that a new release is built. 13Chapter 3 Agile software development

14 Test-first development  Writing tests before code clarifies the requirements to be implemented.  Tests are written as programs rather than data so that they can be executed automatically. The test includes a check that it has executed correctly.  Usually relies on a testing framework such as Junit.  All previous and new tests are run automatically when new functionality is added, thus checking that the new functionality has not introduced errors. 14Chapter 3 Agile software development

15 Pair programming  In XP, programmers work in pairs, sitting together to develop code.  This helps develop common ownership of code and spreads knowledge across the team.  It serves as an informal review process as each line of code is looked at by more than 1 person.  It encourages refactoring as the whole team can benefit from this.  Measurements suggest that development productivity with pair programming is similar to that of two people working independently. 15Chapter 3 Agile software development

17 Advantages of pair programming  It supports the idea of collective ownership and responsibility for the system.  Individuals are not held responsible for problems with the code. Instead, the team has collective responsibility for resolving these problems.  It acts as an informal review process because each line of code is looked at by at least two people.  It helps support refactoring, which is a process of software improvement.  Where pair programming and collective ownership are used, others benefit immediately from the refactoring so they are likely to support the process. Chapter 3 Agile software development17 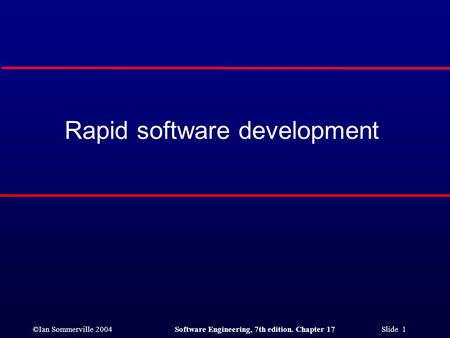 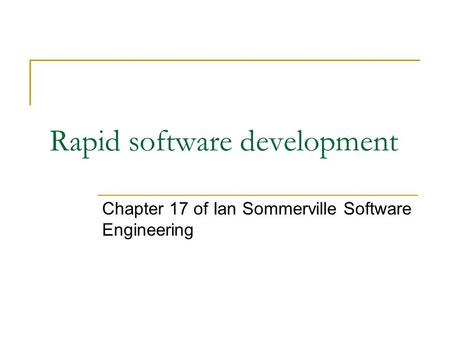 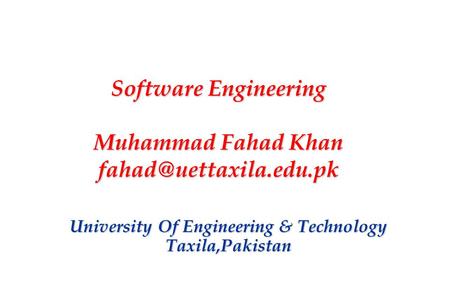 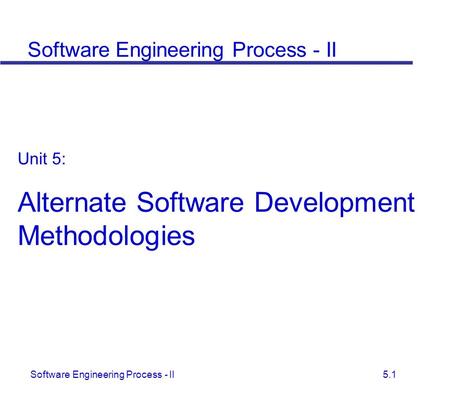 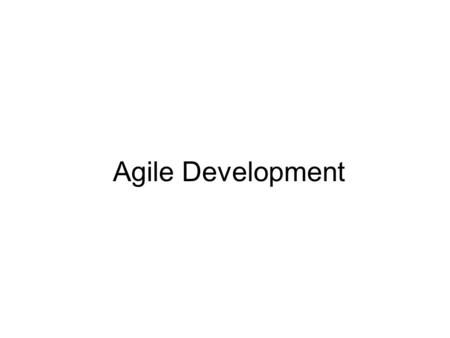 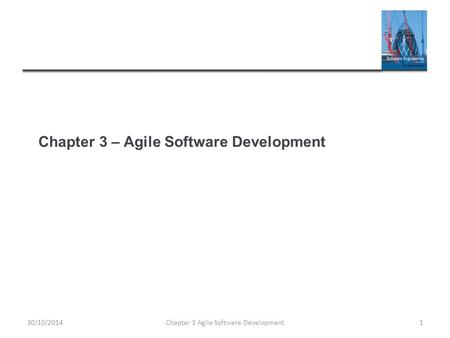 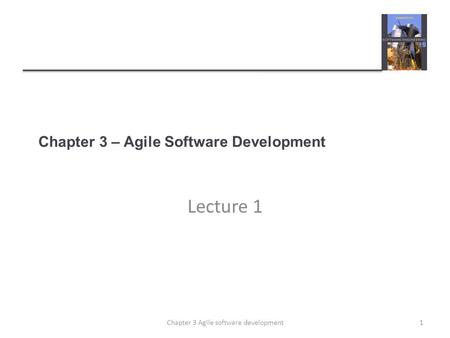 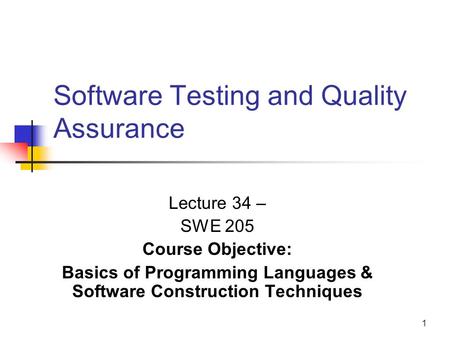 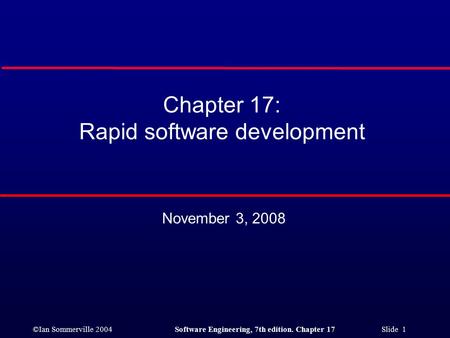 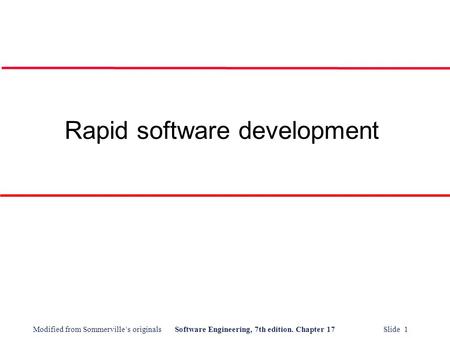 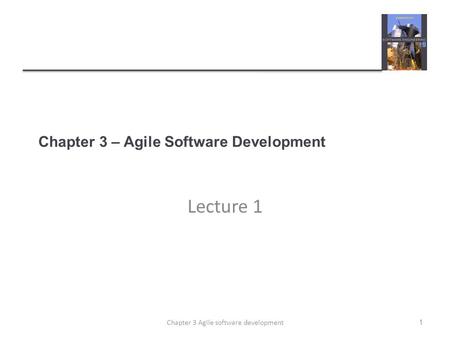 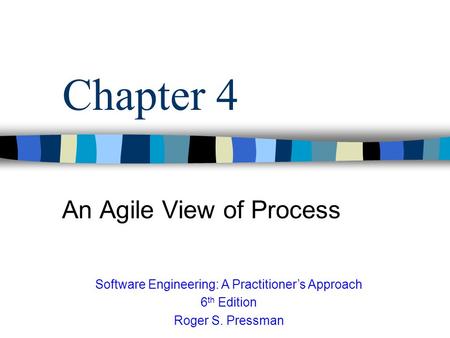 An Agile View of Process 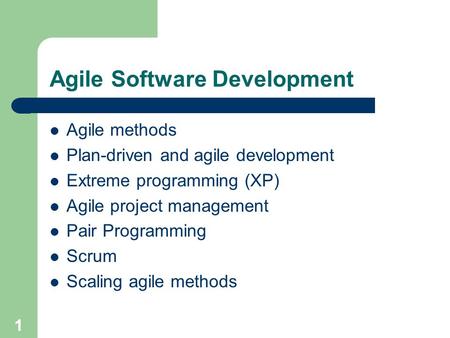 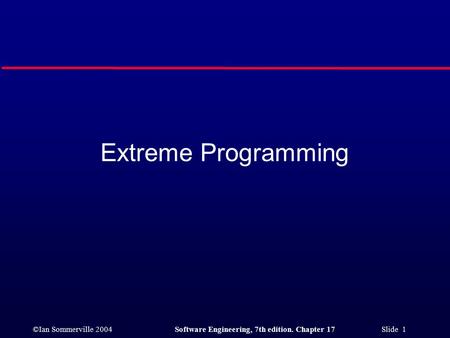 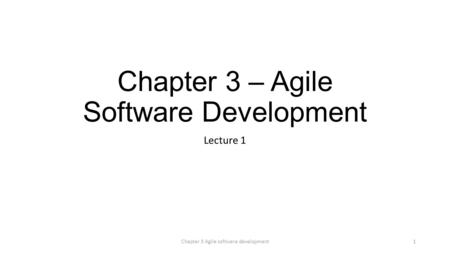 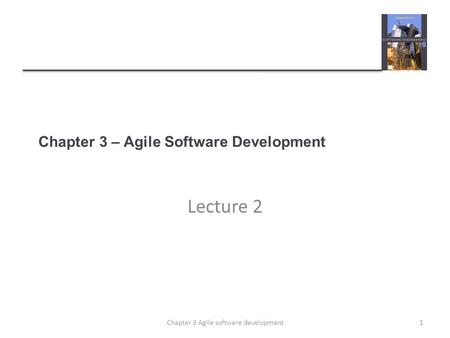 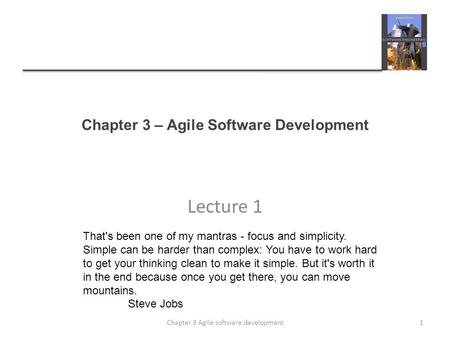 Chapter 3 – Agile Software Development Lecture 1 1Chapter 3 Agile software development That's been one of my mantras - focus and simplicity. Simple can. 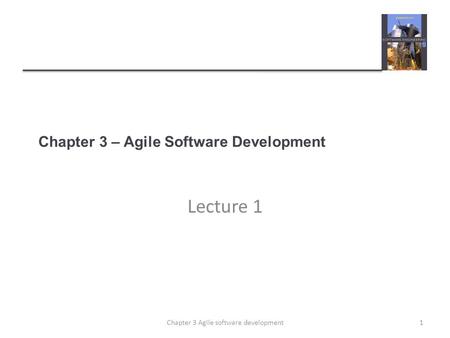 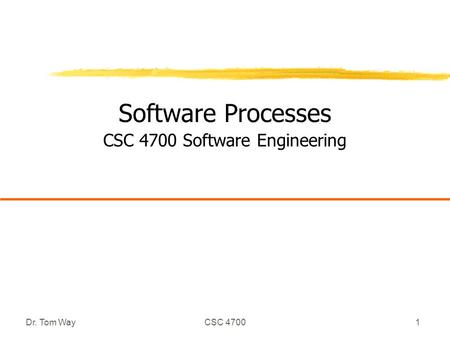 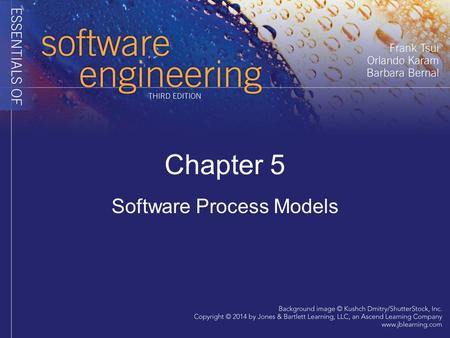