4 Polyatomic Ions Polyatomic Ions – Ions that are made of more than one atom. Ammonium Bicarbonate Group of atoms that reacts as a unit Have overall positive or negative charge

5 Ionic Bonds The attraction between two oppositely charged ions
Form as a result of positive and negative ions being attracted to each other. Form ionic compounds! Usually form between a metal and nonmetal!

8 Naming Ionic Compounds
The name of the (+) ion comes first, followed by the name of the (-) ion. Positive ion is usually a metal. If the negative ion is a single element, end of it’s name changes to –ide. NaCl  Sodium Chloride MgO  Magnesium Oxide

9 If the negative ion is polyatomic:
Ends with -ate or -ite NH4NO3 ammonium nitrate (fertilizer)

10 Ionic Crystals Form solids by building up repeating patterns of ions.
Have orderly, three dimensional arrangement called a crystal. Every ion is attracted to ions of opposite charge that surround it. Many crystals are hard and brittle, due to the strength of their ionic bonds

11 High Melting Points When ions have enough energy to overcome the attractive forces between them, they break away from each other. Crystal melts into liquid A lot of energy is needed to break these bonds

12 Electrical Conductivity
When ionic crystals dissolve in water, the bonds between ions are broken. Ions are free to move about & the solution conducts current. Solids do not conduct current well  good insulators 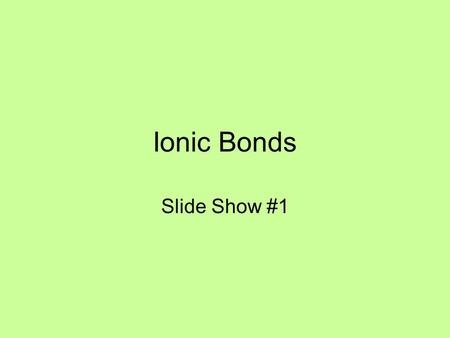 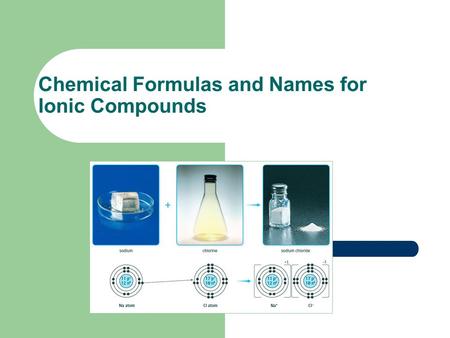