2 Focus Question How did transportation developments and industrialization affect the nations economy?

4 Transportation Revolution
Most roads were privately owned Owner expected to make a profit by collecting a toll Used a pike that blocked the road After collecting a toll, the attendant would turn the pike

5 Transportation Revolution
Steamboats 1807 by Robert Fulton the Clermont, made 150 mile trip in 32 hours NYC to Albany up the Hudson River Steam powered ships made it possible for farmers and planters to increase their trade and profits

15 The Boston Manufacturing Company
1813, first factory to operate in which all the processes from raw cotton to finished cloth were completed in a single mill  Eliminated loss of time, labor, and materials

16 The Boston Manufacturing Company
The rivers made it cheaper for mills to run their factory utilizing water power Cheap labor of women and children Easier for mills to produce products The Lowell Mill had supplied all the necessary elements of textiles under one roof, which replaced the putting out system (which enabled workers to bring home cloth or thread for the workers to create clothing/cloth at home).  The Lowell Mill supplied numerous individuals with the comfort of already made clothing, and produced ample sizes.

17 Inventions Transform Industry and Agriculture
Eli Whitney While making guns for the government, Realize that if the parts were all made exactly the same They could be used on any similar gun

20 Cotton Gin In 1794 Eli Whitney received a patent for his cotton gin
After the invention of the cotton gin, the yield of raw cotton doubled each decade after 1800 Making cotton the dominate crop in the South

24 Shoes and Sewing Machines
I.M. Singer Added the foot treadle for use in homes- 1851 Price of clothing dropped by 75%, Allowing more people to afford to buy clothes at a store

27 Name the first great canal built in the 1820’s that connects the East to the West.
Erie Canal

29 Name two results of the Erie Canal.
Increase the settlement area of the Great Lakes was highly profitable for New York Cities and industries along the canal developed and flourished 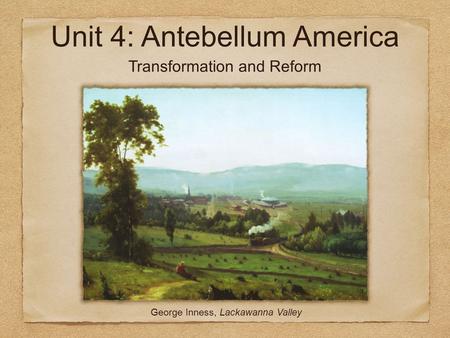