2 What is a Biome? Biome- is a group of land ecosystems with similar climates and organisms. What is an ecosystem? An ecosystem is a community of organisms that live in a particular area, along with their nonliving surroundings

3 Climate Climate vs. Weather… what’s the diff?
Climate: The typical weather pattern in an area over a long period of time Weather: the condition of Earth’s atmosphere at a particular time and place Factors contributing to climate Average rain fall Average temperature Average amount of sunlight during seasons

9 Majority of the world’s temperate rainforests can be found along the Pacific Coast of North American stretching from Oregon to Alaska, some can also be found on the Southeast coast of Chile, and a few others can be found on the coasts of the United Kingdom, Norway, Japan, New Zealand, and southern Australia

11 Tropical Rainforests This biome is usually located near the equator. The temperature is warm and precipitation is high. Between 4 and 22 ft of rain fall each year. Average temperature is between 68°F and 93°F ALL YEAR!

19 Desert The desert is an area that receives less than 25 cm of rainfall a year. The climate is usually hot and dry.

20 Although most deserts, such as the Sahara of North Africa and the deserts of the southwestern U.S., Mexico, and Australia are hot, another kind of desert, cold deserts, occur in the basin and range area of Utah and Nevada and in parts of western Asia.

23 Grassland The temperature is moderate and little precipitation. An area populated by grasses and other “non wood” plants because there is not much rain. The precipitation is so inconsistent that drought and fire prevent large forests from growing.

24 Savannahs are warmer grasslands (tropical) and they cover almost half of Africa.
Temperate grasslands, commonly called prairies or steppes have more varyingtemperatures and can be found in South Africa, North America, Hungary, Argentina, and Uruguay.

26 Deciduous Forest Trees in this biome shed their leaves and grow new ones each year. Rainfall (30 – 60in.)and temperatures (50°F) are moderate

28 Deciduous biomes are located primarily in the eastern half of the United States, Canada, Europe, parts of Russia, China, and Japan.

30 Tundra Since the tundra is so cold, most of the soil is frozen all year called permafrost. Plants are especially hardy to grow here.

33 Taiga (Boreal Forest) Similar to the tundra, but not as bitterly cold all year. The taiga’s climate is cool (very cold in winter, moderately warm in the summer). The dominant trees are coniferous trees.

34 Most of Canada and Russia are covered in Taiga/Boreal Forrest. 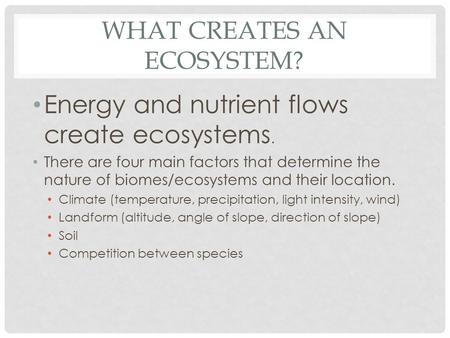 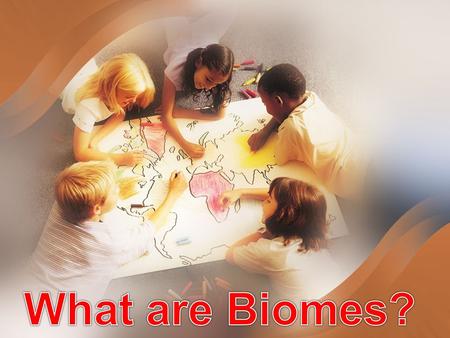