2 Land Management The main categories of countryside lands are farmland
rangeland forest land national and state parks wilderness. We have sometimes managed these lands sustainably so that they will provide resources indefinitely. We have also sometimes reduced their productivity by overusing or polluting them. The condition of rural land is important because of the ecological services that it provides.

3 Farmlands Farmland is land that is used to grow crops and fruit.
The U.S. contains more than 100 million hectares of prime farmland. However, in some places, urban development threatens some of the most productive farmland. In 1996, the U.S. government established a national Farmland Protection Program to help state, county, and local governments protect farmland in danger of being paved over or otherwise developed.

4 Rangelands Land that supports different vegetation types like grasslands, shrublands, and deserts and that is not used for farming or timber production is called rangeland. Rangelands can be arid, like the rangelands in the desert southwest, or relatively wet, like the rangelands of Florida. The most common human use of rangeland is for the grazing of livestock.

5 Rangelands Cattle, sheep, and goats are common livestock on the rangeland, which are valued for their meat, milk, wool, and hides. Native wildlife also grazes these lands. Like farmland, rangeland is essential for maintaining the world’s food supply. World population growth may require a 40 percent increase in the food production of rangeland from 1977 to 2030.

6 Problems on the Range Overgrazing is the depletion of vegetation due to the continuous feeding of too many animals. Overgrazing often results in changes in the plant community. Less desirable plants may invade the area and replace more-desirable plant species. In cases of severe overgrazing, all the vegetation that covers the land is eaten. Once the plants are gone, there is nothing to keep the soil from eroding.

8 Maintaining the Range Improving rangeland that has been degraded by overgrazing often includes methods killing invasive plants planting native vegetation fencing areas to let them recover to the state they were in before they were overgrazed. Ranchers also control grazing by digging many small water holes so that the vegetation around a single water hole is not overgrazed. Rangeland can also be left unused for periods of time so that the vegetation can recover.

9 Forest Lands Trees are harvested to provide products we use every day, such as paper, furniture, and lumber and plywood for our homes. In addition to wood and paper, we also valued forest products such as maple syrup and turpentine. There are many ecosystem services provided by forests. However, one of the most important is the removal of CO2 from the air.

10 Harvesting Trees People use enormous amounts of wood.
The worldwide average is 1,800 cm3 of wood used per person each day. However, on average, each person in the United States uses about 3.5 times this amount. About 1.5 billion people in developing countries depend on firewood as their main source of fuel.

13 Deforestation Deforestation is the process of clearing forests.
Most countries become severely deforested as populations expand and the demand for forest products increases. Forests are cleared to convert the land into farmland, and to make space for roads, homes, factories, and office buildings. Deforestation reduces wildlife habitat, but it has other impacts, too.

14 Deforestation For example, when forests are cleared from hillsides, soil erosion usually results if the area is not quickly planted with a cover crop. Without tree roots to hold the soil in place, it is easily washed or blown away into the valley below. The rate of deforestation is especially high in tropical rain forests, where the soil is relatively thin. Farmers who clear forests in these areas must always move from one plot of land to another, clearing more forest land each time.

15 Reforestation Reforestation is the reestablishment and development of trees in a forest land. In some places, reforestation is happening faster than trees are being cut down. The price of deforestation, which causes soil erosion, landslides, and flooding, is sometimes too high, so in some areas the forest has been allowed to regenerate or has been replanted.

16 Reforestation Some governments require reforestation after timber has been harvested from public land. However, worldwide, more than 90 percent of all timber comes from forests that are not managed by an agency that monitors the health of forest ecosystems. Many governments are currently working to improve reforestation efforts and to promote less destructive methods. Private organizations have established tree-planting programs on roadsides and in cities.

17 Parks and Preserves In the 1870s, a group of explorers approached Congress with news of a magnificent expanse of land in Wyoming and Montana they believed would be damaged by the development that had changed the northeastern United States. Congress agreed to protect this land by setting it aside for the public to use and enjoy, and the first national park, Yellowstone, was created. Today, the U.S. has about 50 national parks.

18 Parks and Preserves Most public lands are not as protected as the national parks are. Some public lands are leased to private companies for logging, mining, and ranching. Others are maintained for hunting, fishing, wild-life refuges, or to protect endangered species. International efforts include the Biosphere Program that has set up several hundred preserves, called biosphere reserves, that include people in the management plan of the reserves.

20 Benefits of Protected Areas
Protected areas often provide the only place where unspoiled forests, deserts, or prairies remain. Without these areas, the plants and animals that can survive only in these ecosystems would disappear. Wilderness areas serve as outdoor classrooms and research labs where people can learn more about the natural world. These protected areas also provide recreation, such as hiking and camping, for many people.

21 Threats to Protects Areas
Around the world, more people visit national parks and wilderness areas each year and leave their mark on the land. Litter and traffic jams now plague many of our national parks. Rangelands, mining and logging sites, oil and gas operations, power plants, and urban areas are often close enough to affect the parks. In addition, preserved areas are affected by climate change and by air and water pollution, as are most other parts of the world.

22 Threats to Protect Areas
In attempts to protect wilderness from damage, limits have been set in some areas on the number of people permitted in the area at any given time. Some areas are completely closed to visitors to allow wild animals to breed. In addition, volunteer programs are now active in many wilderness areas. Volunteers help pick up trash, build trails, control invading or exotic species, and help educate the visiting public.

24 Ticket out the Door List three main categories of the countryside.
What is farmland? What is rangeland? How does overgrazing affect plant communities? What is deforestation? 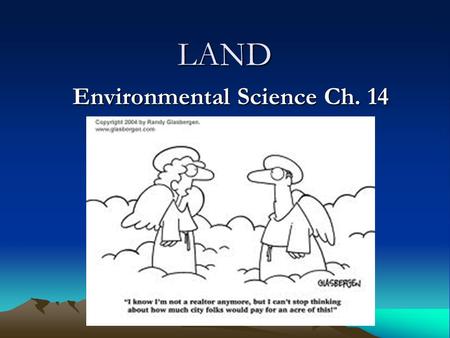 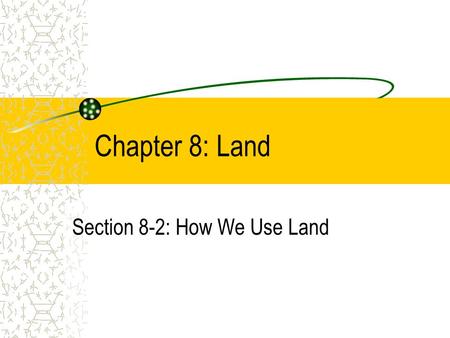