3 How can bacteria exchange genes?
Through tunnel like connections Viruses carry bacterial genes Bacteria take up DNA from surrounding environment

4 I. Biologists have learned to manipulate DNA
A. The Beginnings of DNA Technology 1. Biotechnology- the use of organisms to perform practical tasks for humans 2. Recombinant DNA technology- combines genes from different sources into a single DNA molecule

5 II. Biologists can engineer bacteria to make useful products
A. Engineering Bacteria: An Introduction 1. Plasmid- a small, circular DNA molecule separate from the much larger bacterial chromosome a) May carry a number of genes and can make copies of itself.

7 c) When a plasmid replicates, one copy can pass from one bacterial cell to another, resulting in gene “sharing” among bacteria.

8 2. Biologists use plasmids to move pieces of DNA into bacteria.
a) First, a plasmid is removed from a bacterial cell and the desired gene is inserted into the plasmid.

9 b) The plasmid is now a combination of its original DNA and the new DNA - it is called recombinant DNA. c) Then, the recombinant DNA is put back into a bacterial cell, where it can replicate many times as the cell reproduces, making many copies of the desired gene. This is called gene cloning.

11 B. “Cutting and Pasting” DNA
1. First, a piece of DNA containing the desired gene must be “cut” out of a much longer DNA molecule. a) restriction enzyme- an enzyme that chops up foreign DNA into small pieces at specific spots in the DNA sequence

15 2. Identifying Specific Genes with Probes
a) One method requires knowing at least part of the gene’s nucleotide sequence. 1) Knowing this, a biologist can use nucleotides labeled with a radioactive isotope to build a complementary single strand of DNA. 2) Nucleic acid probe- used to locate specific genes

16 b) Next, the biologist treats the DNA being searched with chemicals or heat to separate the 2 DNA strands. The nucleic acid probe is mixed in with these single strands. c) The probe tags the correct DNA portion by pairing with the complementary sequence in the protein-V gene.

17 d) Once the biologist uses this radioactive marker to identify the bacterial cells with the desired gene, those cells are allowed to multiply further, producing the desired gene in large amounts.

20 III. Biologists can genetically engineer plants and animals
A. Producing Genetically Modified Plants 1. Genetically modified organism (GMO)- any organism that has acquired one or more genes by artificial means a) Transgenic- a GMO whose source of new genetic materials is from a different species

22 B. Producing Genetically Modified Animals
1. First step is to extract an egg cell from a female. 2. Sperm from the same species is used to fertilize the egg in a “test-tube” environment. 3. Then the desired gene is injected into the fertilized egg and the egg is returned to a uterus where it can develop into an embryo.

23 C. Animal Cloning 1. The first successful clone was the sheep named Dolly. 2. The procedure for cloning is the same as producing a GM animal, except that instead of inserting a gene into an egg, an entire foreign nucleus replaces the egg’s own nucleus.

24 D. The GMO Controversy 1. Can GM crops pass their new genes to closely related plants in the nearby wild areas? 2. Another concern is the GM plants and animals could have unknown risks to human consumers.

25 IV. DNA technologies have many applications
A. Mass-Producing DNA in a Test Tube 1. Polymerase chain reaction (PCR)- a technique that makes many copies of a certain segment of DNA without using living cells

26 Figure 13-15 PCR produces multiple copies of a segment of DNA.

27 B. Comparing DNA 1. Gel electrophoresis- a technique for sorting molecules or fragments of molecules by length a) First, each DNA sample is cut up into fragments by a group of restriction enzymes.

28 b) Next, a few drops of each sample are placed in a small pocket or well at one end of a gel. The other end of the gel has a positive charge. All DNA molecules are negatively charged, so they move through pores in the gel toward the positive pole.

30 d) Lastly, the gel is treated with a stain that makes the DNA visible under ultraviolet light. The fragments show up as a series of bands in each “lane” of the gel.

31 Figure The gel electrophoresis technique shown above can be used to compare DNA of individuals or species.

32 2. Genetic markers- particular stretches of DNA that are variable among individuals (easy way to tell if an individual is a carrier of a disease) 3. DNA fingerprints- an individual’s unique banding pattern

33 V. Control mechanisms switch genes on and off
A. Regulation of Genes in Prokaryotes 1. Operon- cluster of genes and their controlled sequences 2. Promoter- control sequence on an operon where RNA polymerase attaches to the DNA

34 Figure E. coli bacteria, natural inhabitants of your intestine, break down the sugar lactose. The genes that code for lactose-processing enzymes are located next to control sequences. Altogether, this stretch of DNA is called the lac operon.

36 Figure The lac operon is inactive in the absence of lactose (top) because a repressor blocks attachment of RNA polymerase to the promoter. With lactose present (bottom), the repressor is inactivated, and transcription of lactose-processing genes proceeds.

37 B. Regulation of Genes in Eukaryotes
1. Transcription factors- proteins that regulate transcription by binding to those promoters or to RNA polymerases; are activated and deactivated by chemical signals in the cell 2. Gene expression- the transcription and translation of genes into proteins

38 C. From Egg to Organism 1. Cellular differentiation- when cells become increasingly specialized in structure and function

39 Figure Though all the genes of the genome are present in every type of cell, only a small, specific fraction of these genes are actually expressed in each type of cell. The yellow color indicates a gene that is "turned on" (expressed).

40 D. Stem Cells 1. Cells that remain undifferentiated; they have the potential to differentiate into various types of cells; may be able to help people with disabling diseases

41 Figure Present at a very early stage of human development, stem cells have the potential to develop into any type of human cell.

43 Figure The highlighted portions of the fruit fly and mouse chromosomes carry very similar homeotic genes. The color coding identifies the parts of the embryo and adult animals that are affected by these genes. 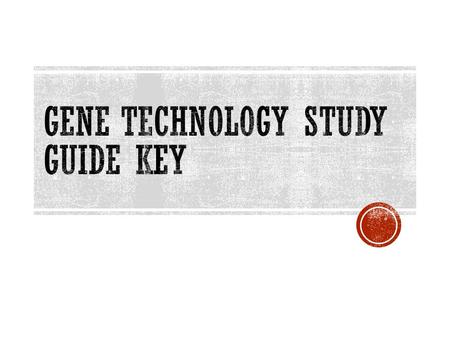