1 Java Applications & Program Design
Based on slides from Deitel & Associates, Inc. Revised by T. A. Yang

4 2.2 Our First Program in Java: Printing a Line of Text
Java application A computer program that executes when you use the java command to launch the Java Virtual Machine (JVM). Sample program in Fig. 2.1 displays a line of text.

8 Required sections for this class are specified in the Assignments page:

9 Blank lines and space characters
Make programs easier to read. Blank lines, spaces and tabs are known as white space (or whitespace). White space is ignored by the compiler.

10 Class names By convention, begin with a capital letter and capitalize the first letter of each word they include (e.g., SampleClassName). A class name is an identifier—a series of characters consisting of letters, digits, underscores (_) and dollar signs ($) that does not begin with a digit and does not contain spaces. Java is case sensitive—uppercase and lowercase letters are distinct—so a1 and A1 are different (but both valid) identifiers.

11 Braces A left brace, {, begins the body of every class declaration.
A corresponding right brace, }, must end each class declaration. Code between braces should be indented. This indentation is one of the spacing conventions mentioned earlier.

12 Declaring the main Method
public static void main( String[] args ) Starting point of every Java application. Parentheses after the identifier main indicate that it’s a program building block called a method. Java class declarations normally contain one or more methods. main must be defined as shown; otherwise, the JVM will not execute the application. Methods perform tasks and can return information when they complete their tasks. Keyword void indicates that this method will not return any information. Static methods, in contrast to instance methods, do not use instance variables of the class.

13 Body of the method declaration Statements
Enclosed in left and right braces. Statements System.out.println("Welcome to Java Programming!"); Instructs the computer to perform an action Print the string of characters contained between the double quotation marks. A string is sometimes called a character string or a string literal. White-space characters in strings are not ignored by the compiler. Strings cannot span multiple lines of code.

16 Compiling and Executing Your First Java Application
Open a command window and change to the directory where the program is stored. Many operating systems use the command cd to change directories. To compile the program, type javac Welcome1.java If the program contains no syntax errors, preceding command creates a .class file (known as the class file) containing the platform-independent Java bytecodes that represent the application. When we use the java command to execute the application on a given platform, these bytecodes will be translated by the JVM into instructions that are understood by the underlying operating system.

23 2.5 Another Application: Adding Integers
Whole numbers, like –22, 7, 0 and 1024) Programs remember numbers and other data in the computer’s memory and access that data through program elements called variables. The program of Fig. 2.7 demonstrates these concepts.

25 import declaration Helps the compiler locate a class that is used in this program. Rich set of predefined classes that you can reuse rather than “reinventing the wheel.” Classes are grouped into packages—named groups of related classes—and are collectively referred to as the Java class library, or the Java Application Programming Interface (Java API). You use import declarations to identify the predefined classes used in a Java program.

27 Variable declaration statement
Scanner input = new Scanner( System.in ); Specifies the name (input) and type (Scanner) of a variable that is used in this program. Variable A location in the computer’s memory where a value can be stored for use later in a program. Must be declared with a name and a type before they can be used. A variable’s name enables the program to access the value of the variable in memory. The name can be any valid identifier. A variable’s type specifies what kind of information is stored at that location in memory.

28 The new keyword creates an object.
Scanner Enables a program to read data for use in a program. Data can come from many sources, such as the user at the keyboard or a file on disk. Before using a Scanner, you must create it and specify the source of the data. The equals sign (=) in a declaration indicates that the variable should be initialized (i.e., prepared for use in the program) with the result of the expression to the right of the equals sign. The new keyword creates an object. Standard input object, System.in, enables applications to read bytes of information typed by the user. Scanner object translates these bytes into types that can be used in a program.

29 Variable declaration statements
int number1; // first number to add int number2; // second number to add int sum; // sum of number1 and number2 declare that variables number1, number2 and sum hold data of type int They can hold integer. Range of values for an int is –2,147,483,648 to +2,147,483,647. Actual int values may not contain commas. Several variables of the same type may be declared in one declaration with the variable names separated by commas.

31 System is a class. Java API Part of package java.lang
Class System is not imported with an import declaration at the beginning of the program. Java API

32 Scanner method nextInt( )
number1 = input.nextInt(); // read first number from user Obtains an integer from the user at the keyboard. Program waits for the user to type the number and press the Enter key to submit the number to the program. The result of the call to method nextInt is placed in variable number1 by using the assignment operator, =. “number1 gets the value of input.nextInt().” Operator = is called a binary operator—it has two operands. Everything to the right of the assignment operator, =, is always evaluated before the assignment is performed.

33 Integer formatted output
Arithmetic sum = number1 + number2; // add numbers Assignment statement that calculates the sum of the variables number1 and number2 and then assigns the result to variable sum by using the assignment operator, =. “sum gets the value of number1 + number2.” Portions of statements that contain calculations are called expressions. An expression is any portion of a statement that has a value associated with it. Integer formatted output System.out.printf( "Sum is %d\n", sum ); Format specifier %d is a placeholder for an int value The letter d stands for “decimal integer.”

35 2.7 Arithmetic Arithmetic operators are summarized in Fig. 2.11.
The asterisk (*) indicates multiplication The percent sign (%) is the remainder operator The arithmetic operators are binary operators because they each operate on two operands. Integer division yields an integer quotient. Any fractional part in integer division is simply discarded (i.e., truncated)—no rounding occurs. The remainder operator, %, yields the remainder after division. Parentheses are used to group terms in expressions in the same manner as in algebraic expressions. If an expression contains nested parentheses, the expression in the innermost set of parentheses is evaluated first.

38 if statement: Note that there is no semicolon (;) at the end of the first line of each if statement. Such a semicolon would result in a logic error at execution time. Treated as the empty statement—semicolon by itself.

40 Program Design using pseudocodes
What is pseudocode? In software engineering, an outline of a program written in English or the user's natural language; it is used to plan the program, and also serves as a source for test engineers doing software maintenance; it cannot be compiled.

41 Example Pseudocode: Exercise: begin Input price
If price < 100 then print “cheap” Else if price < 200 then print “acceptable” Else print “expensive” end Exercise: Write down a pseudocode for the following problem: The program gets two numbers from the user and then compare the two numbers. It always prints the larger number.

42 Another exercise of pseudocode

45 Exercise: Draw a flowchart to show your program design for the following problem: The program gets two numbers from the user and then compare the two numbers. It always prints the larger number. 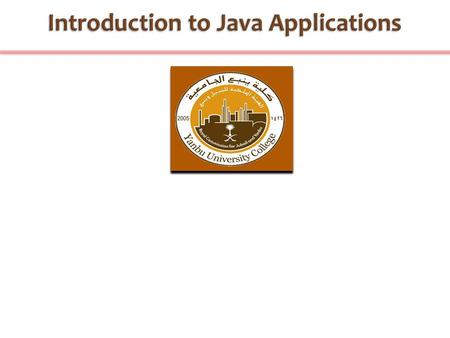 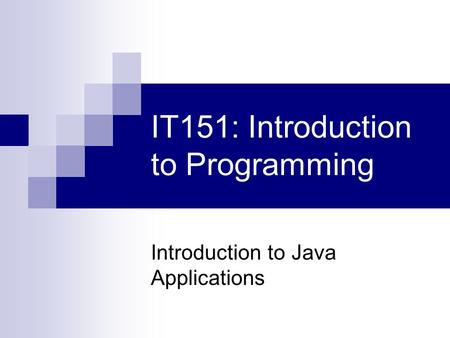 IT151: Introduction to Programming 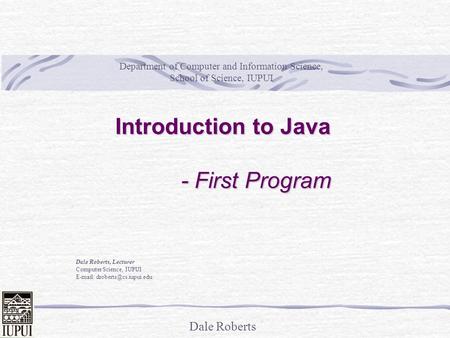 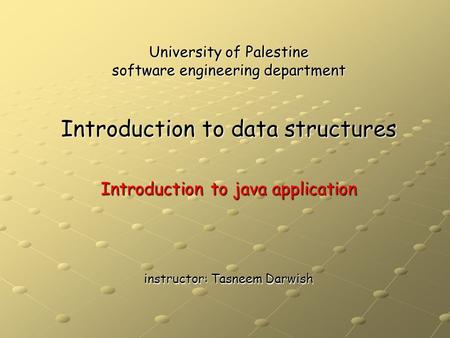 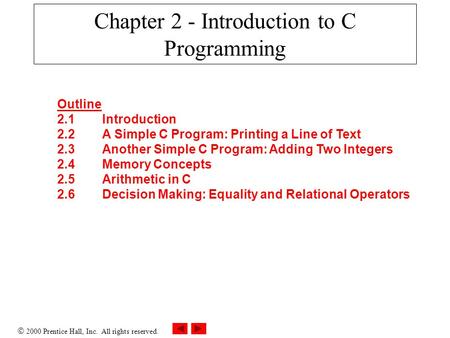 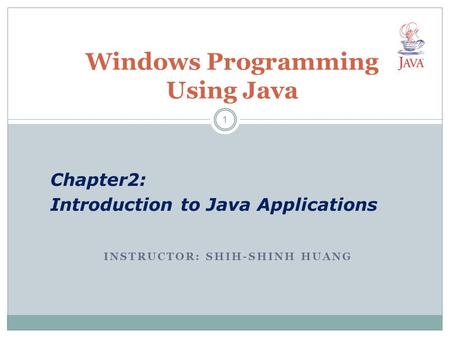 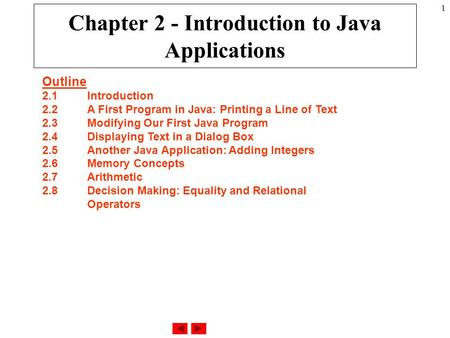 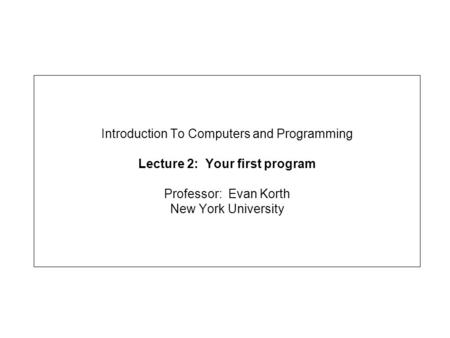 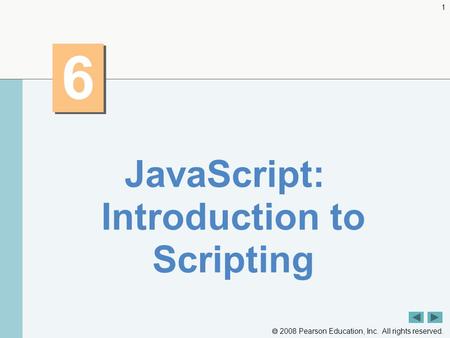 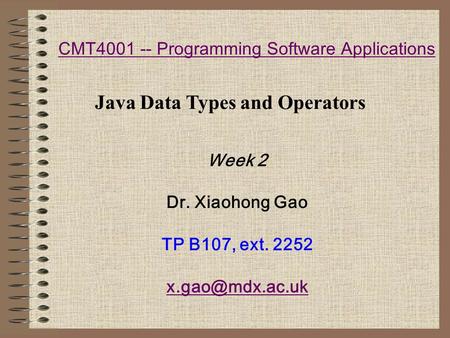 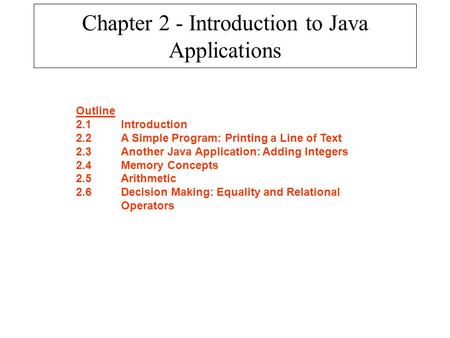 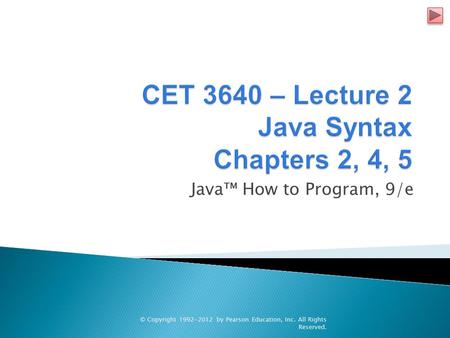 Java™ How to Program, 9/e © Copyright by Pearson Education, Inc. All Rights Reserved. 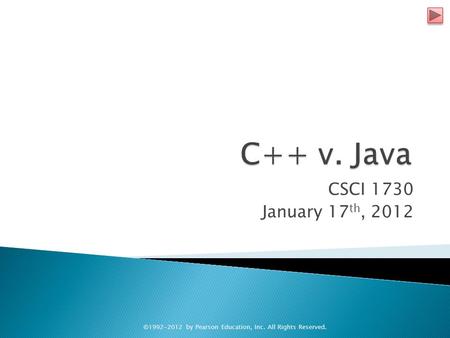