2 A.Types of elections 1.Primary election 2.General election – an election in which voters make final decision about candidates and issues

5 3.Federal congressional and presidential elections are held the Tuesday after the 1 st Monday in November Other elections can happen at any time 4.Must vote in your designated precinct

6 D.How to become an Informed Voter 1.From the candidates themselves 2.Public service organizations w/no political ties like the League of Women Voters 3.Newspapers 4.Debates

8 B.Messages from Interest GroupsInterest Groups 1.Want to elect candidates that agree w/their views by endorsements or donating money 2.Large interest groups have political action committees (PACs) whose job is to carry out election activities Get money from people they represent (union members, business employees, corporation stockholders) to use for elections

9 C.News Media and Elections 1.Try not to show bias 2.How to spot bias Media giving more attention to a particular candidate Play up negative side of a candidate 3.Conduct or report opinion polls Must poll a random sample of people

10 A.Planning and Running a Campaign 1.Campaign manager – helps plan broad outlines of campaign 2.Must find out what the public thinks 3.Media use Campaign press secretary – makes sure media show the candidate in the best light

11 D.Financing a Campaign 1.Individuals may give up to $2,400 to each candidate 2.See handout for other limits

12 F.Who is most likely to win – candidates who 1.Are good looking and well organized 2.Have backing of political party 3.Are able to raise a lot of money 4.Is an Incumbent – someone who already holds the office - has a good chance of winning again 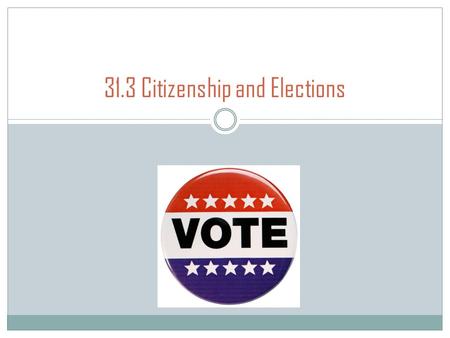