3 Models of the Solar System
In the heliocentric model, Earth and the other planets revolve around the sun. This model was developed by Nicolaus Copernicus.

4 Galileo Used a telescope to view the solar system.
Observed the four larger moons that orbited Jupiter. Observed the phases of Venus

5 Brahe & Kepler Brahe carefully observed the positions of the planets.
Kepler had wrote laws that explained the behavior of planets orbiting the sun.

6 Kepler’s Laws of Motion
LAW 1: The orbit of a planet/comet about the Sun is an ellipse with the Sun's center of mass at one focus

7 Kepler’s Laws of Motion
LAW 2: A line joining a planet/comet and the Sun sweeps out equal areas in equal intervals of time

8 Kepler’s Laws of Motion
LAW 3: The farther a planet is from the sun, the longer the orbital period.

9 Forces that Keeps Planets in Orbit Around the Sun
Newton concluded that two factors, inertia & gravity, combine to keep the planets in orbit. Inertia is tendency of an object to resist a change in motion. Gravity is the force that attract all objects toward each other.

11 Solar Features Solar winds are a stream of electrically charged particles coming from the corona. Sunspots are areas of gas on the sun that are cooler than the gases around them. Prominences are reddish loops of gas. Solar flares are large explosions of gas on photosphere.

12 Inner Planets Total of eight planets in our solar system.
The inner planets are also called the terrestrial planets. Small in Size. Have rocky surfaces.

17 Asteriod Belt Asteroids are objects revolving around the sun that are too small and too numerous to be considered planets. The asteroid belt is located between Mars and Jupiter. Asteroids include Ceres, Pallas, Juno and Vesta. Over 300 asteroids have been identified.

19 Outer Planets (Jovian Planets)
Found outside the asteroid belt between the asteroids and the Kuiper Belt. These planets are large and made of gas.

23 Neptune Neptune is 30 AU from the sun. Diameter is 49,500 km.
Rotates every 16.1 hours. Revolves around the sun every 165 years. Thick atmosphere of hydrogen & helium. 13 moons (Triton). Temperature -200oC. Has an ring system. Had a Great Dark Spot that has since disappeared.

24 Kuiper Belt The region of the Solar System beyond the planets extending from the orbit of Neptune (at 30 AU) to approximately 55 AU from the Sun.

25 Oort Cloud & Comets The Oort cloud is where the comets are found.
Comets are dirty snowballs that orbit the sun. A comet has a head and tail, the head is made of the nucleus and coma. The tail of the comet always points away from the sun because of the solar winds. Halley’s comet appears every 76 years.

26 Meteoroids, Meteors & Meteorites
Meteoroids are pieces of rocks flying through space. Meteors are meteoroids that have entered the earth’s atmosphere, burning up because of friction. Meteorites are meteors that reach the surface of earth.

33 Review Questions Who stated that planets orbited the sun in elliptical orbits? (Kepler) Which two factors keep planets in orbit around the sun? (gravity & inertia) What is the largest moon in our solar system? (Ganymede) Which moon has volcanic activity? (Io)

34 Review Questions What part of the sun produces light? (photosphere)
What are the cooler dark areas on the sun’s surface called? (sunspots) What do we call the large chunks of ice orbiting the sun in the Oort Cloud? (comets) What is found between Mars & Jupiter? (asteroids)

36 Review Questions What layer of the sun produces color? (chromosphere)
What is the center of the sun called? (core) How many planets have been identified in our solar system? (8) What do we call explosions on the surface of the sun? (solar flares)

37 Review Questions What do we call extensions of burning gases on the sun? (prominences) Which planet is red because of the iron oxides on the surface? (Mars) What is the most abundant gas found in our solar system? (hydrogen) Who developed the first telescope? (Galileo)

38 Review Questions Who calculated the positions of planetary orbits?
(Brahe) Who developed the geocentric model of the solar system? (Ptolemy or Aristotle) Which planet is the most heavily cratered and has a very thin atmosphere? (Mercury) Which of the outer planets is not a gas giant? (Pluto) 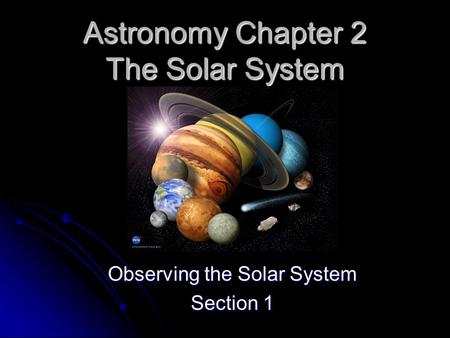 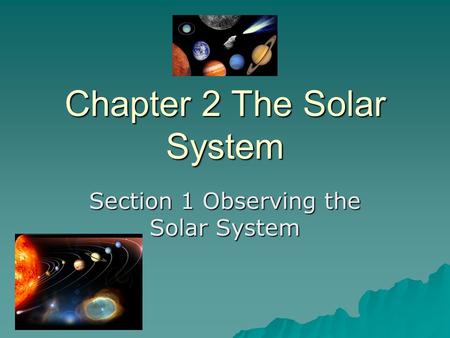 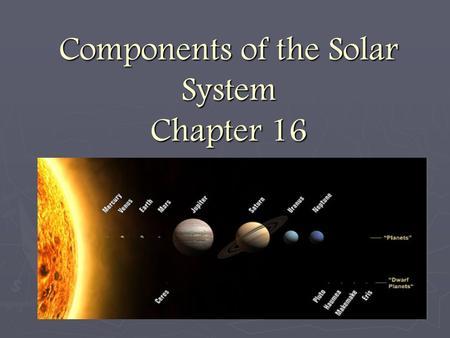 Components of the Solar System Chapter 16. Our Solar System ► The solar system is the name given to the planetary system of which the Earth is a part. 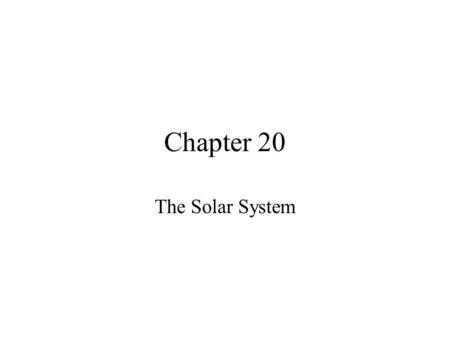 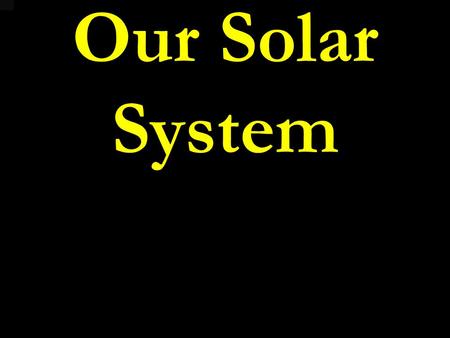