7 Asteroid Belt Between Mars and Jupiter. Over 10,000
Too small and numerous to be planets. Ceres is a dwarf planet An asteroid might have made the dinosaurs extinct.

14 Comet “Dirty snowballs” Spherical chunks of ice, rock and dust
Tens of thousands of Kilometers across Very long and elliptical orbits Sun melts the ice into gas and forms a tail. Solar wind pushes tail away from the sun. Halley’s comet- Every 76 Years (2062)

15 Parts of a Comet 2.Nucleus- Central part of a comet.
3.Tail- gas and dust, pushed away from the sun due to solar wind. 1.Coma- gas and dust from the inner layer.

17 Meteor Meteors are small meteoroids enter the Earth’s atmosphere and burn up entirely. Meteoroids burn due to the friction with the atmosphere. Meteors appear as a streak of light. Meteors are referred to as Shooting Stars.

18 Meteorites Meteoroids that are too big to burn up completely as the pass through the atmosphere. Meteorites survive entry and hit the Earth’s surface. 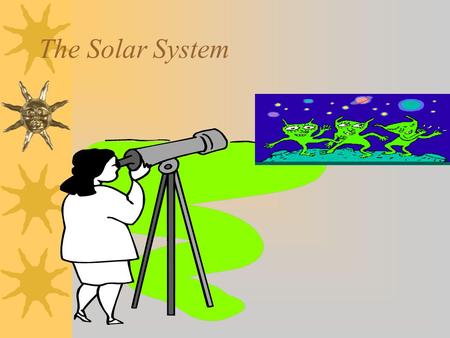 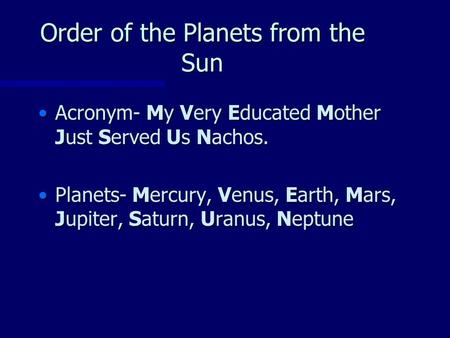 Order of the Planets from the Sun