Presentation on theme: "4 BC to 3 BC Jesus, Jewish boy Born in Bethlehem in ancient Palestine (Israel) Scholars believe He was probably born in fall/spring."— Presentation transcript:

2 4 BC to 3 BC Jesus, Jewish boy Born in Bethlehem in ancient Palestine (Israel) Scholars believe He was probably born in fall/spring

4 Christianity has its roots in Judaism. Christians believe in Jesus, a carpenter who began to travel and teach new ideas about Judaism around 30 CE. He believed that the old laws of Judaism should be replaced by a simple system based on love and kindness.

5 Jesus performed miracles and after people saw the results, they became followers. He laid his hands on people and could heal them. Jesus used parables (stories that teach lessons) to link his teachings to people’s everyday lives. Jesus soon gained a large following.

7 MESSIAH Messiah: Some people believed Jesus was the Messiah Jesus became know as Christ, which is Greek for Messiah Messiah means (Anointed One) Jewish People: Believed a Messiah, or Savior would come to lead them out of exile

8 Christians: People who believed in Jesus’ ideas and teachings Jesus was not popular with Jewish leaders. They did not want him to threaten their power and they had the Romans arrest Jesus. Jesus was crucified at the age of 33. Christians believe that Jesus rose from the dead and went to heaven three days later. They saw the Resurrection as a sign that Jesus was the Messiah (or Savior). This date, 33 CE, is the beginning of Christianity. Jesus’ Disciples: Spread his teachings and their belief that he was the Messiah promised in Jewish scripture

9 The Birth of Christianity, 33 AD

13 There are about 2.1 billion Christians worldwide. *Christianity is the largest religion in the world. Christians are grouped by many denominations. Examples include Catholicism, Orthodoxy, and Protestantism. All denominations of Christians follow the teachings of Jesus. Christians worship in churches, chapels, and cathedrals

15 St. Peter’s Basilica, Vatican City (Built from 1506-1626 with Michelangelo among the architects)

16 The Bible is the main holy book for Christians. It consists of: 1.The Old Testament -- contains the Ten Commandments 2.The New Testament -- about Jesus and his teachings

18 Christmas is the celebration of the birth of Jesus and is observed on December 25 th. Easter celebrates the death and resurrection of Jesus.

Download ppt "4 BC to 3 BC Jesus, Jewish boy Born in Bethlehem in ancient Palestine (Israel) Scholars believe He was probably born in fall/spring." 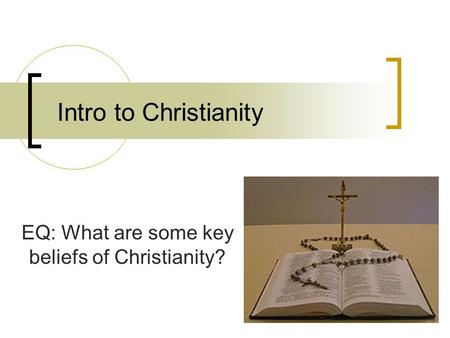 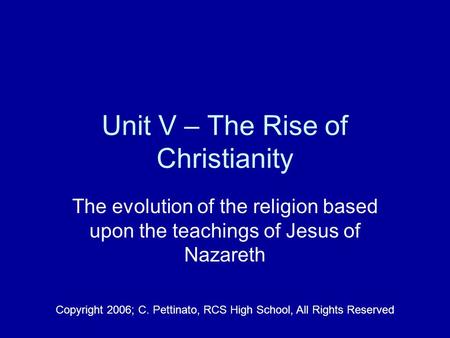 Unit V – The Rise of Christianity The evolution of the religion based upon the teachings of Jesus of Nazareth Copyright 2006; C. Pettinato, RCS High School,