4 Protection of Downwind States The Clean Air Interstate Rule (CAIR) was issued in May, 2005 to address the impacts of transported air pollution in 28 eastern states. The CAIR regulation was remanded to U.S. EPA in December, 2008 and was replaced by the more stringent Cross States Air Pollution Regulation (CSAPR) in August, 2011. CSAPR’s projected compliance costs exceeded CAIRs by $800 million per year. 4

7 7 Protection of Downwind States Actual measured air quality demonstrates that CAIR, with an estimated annual cost of $1.6 billion per year adequately addresses transported air pollutants for the air quality standards that existed in 2010. The additional $800 million per year that CSAPR is estimated to cost is an unnecessary burden on U.S. utility ratepayers.

8 8 Protection of Downwind States In addition to joining the successful litigation to overturn CSAPR, Indiana worked with LA, OH, TX and WV to prepare a joint letter to the news media advocating reconsideration of the rule. A copy of that letter is in the handouts for this session.

9 9 Protection of Downwind States CAUTION!!!While CAIR adequately addresses the air quality standards that existed when it was developed, U.S. EPA has since lowered the ozone standard and is scheduled to issue a new PM 2.5 standard in December, 2012. The next map shows how the lower ozone standard compares to the measured air quality.

12 12 Impacts of Mercury Air Toxics Rule—Indiana Experience Human exposure to mercury is through the consumption of fish—the purpose of limiting the air emissions of mercury is to limit the amount of mercury reaching the water and then contaminating the fish that we eat. Mercury emissions in Indiana have decreased by approximately 50% over the past 14 years.

13 13 Impacts of Mercury Air Toxics Rule—Indiana Experience Measured mercury deposition has decreased by 7% during this time. In spite of these reductions, there is no apparent change in mercury fish concentrations in Indiana. It is unlikely that the additional mercury air emissions reductions required by the Mercury Air Toxics Rule will significantly reduce Indiana fish mercury levels.

14 Fish Tissue Mercury U.S. EPA’s “acceptable” fish mercury levels are 0.3 mg/kg which is 300 ppb. U.S. EPA’s guidance indicates that a properly calculated average mercury value is the appropriate interpretation of the limit. While the average fish tissue mercury levels in Indiana have not changed, they are about one half of the 300 ppb level. 14

19 19 CO 2 (Greenhouse Gasses) Is a rule which effectively prohibits the construction of new electrical generating facilities that use coal in the United States going to make a significant difference in emissions? The National Academy of Sciences report, “America’s Climate Choices” recommends that actions be taken now to start reducing U.S. greenhouse gas emissions to levels between 50% and 80% below 1990 levels.

21 21 CO 2 (Greenhouse Gasses) In the spring of 2012, the Environmental Council of the States (ECOS) passed resolution 12-1 “Challenges of Achieving Significant Greenhouse Gas (GHG) Emissions Reductions.” A copy of this resolution is in your handouts.

22 22 CO 2 (Greenhouse Gasses) The resolution requests that the U.S. EPA develop one or more scenarios that will produce an 80 percent reduction in GHG emissions nationally, from a 2005 baseline, in 2050 or beyond; and to conduct an analysis of the costs and the benefits associated with each such scenario along with an estimate of the costs and benefits of not obtaining these GHG reductions.

23 23 CO 2 (Greenhouse Gasses) U.S. EPA has decided not to spend the resources required to develop the requested scenario, but rather to develop rules to reduce GHG emissions, even if these rules do not materially reduce U.S. emissions. The NSPS for EGUs effectively bans new coal fired facilities in the U.S. without any public plan to actually reduce U.S. (or world) GHG emissions to the levels advocated by the National Academy of Sciences. 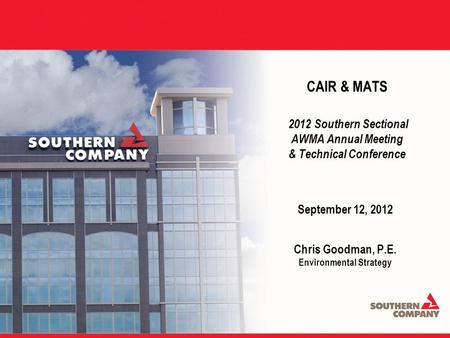 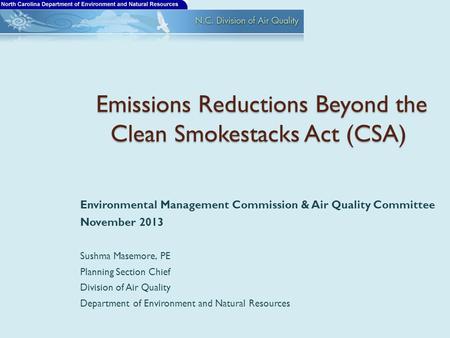 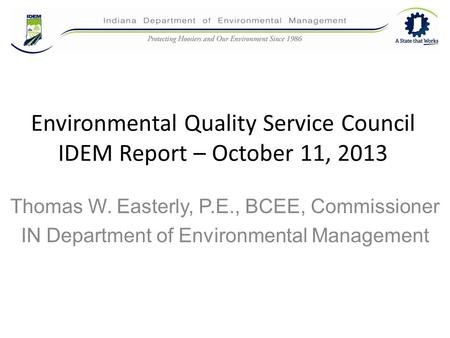 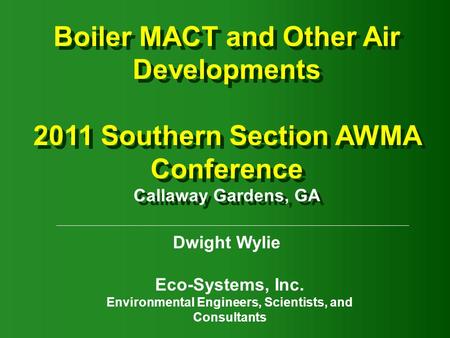 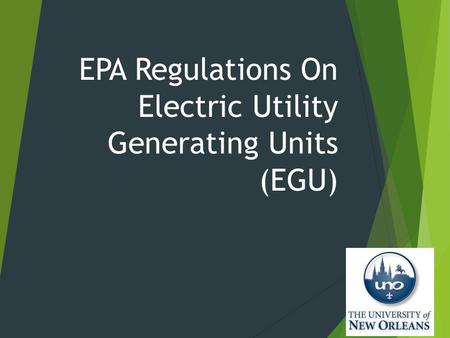 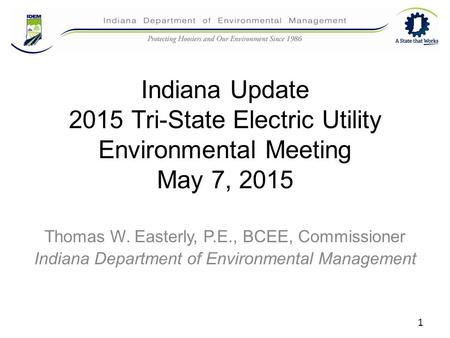 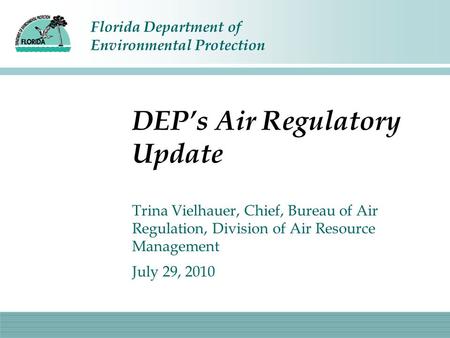 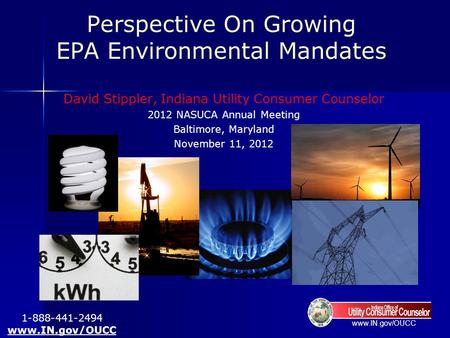 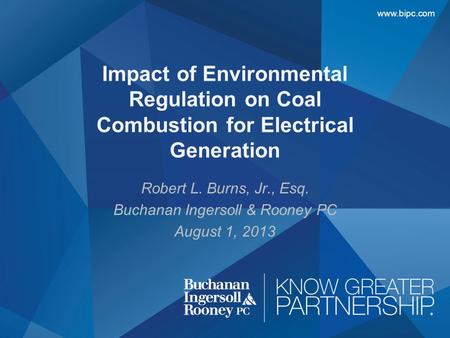 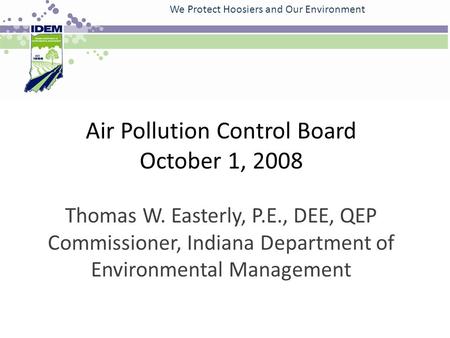 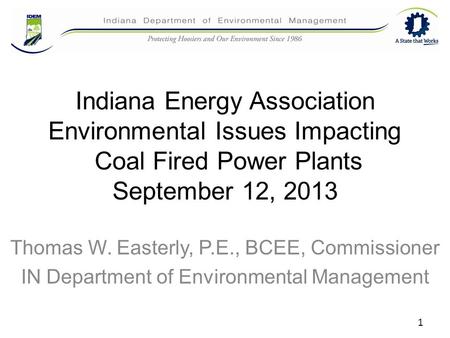 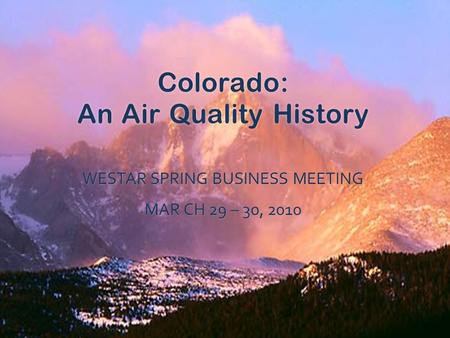 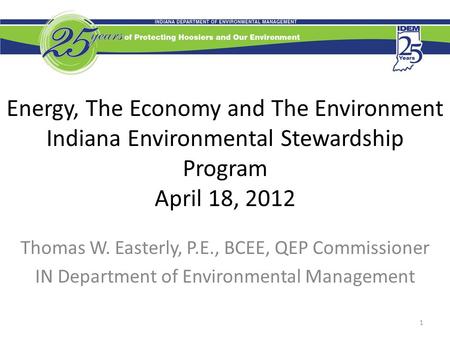