Presentation on theme: "Othello by William Shakespeare Character List. Othello A Venetian general considered to be a good leader by all. He has many interesting stories about."— Presentation transcript:

2 Othello A Venetian general considered to be a good leader by all. He has many interesting stories about battle, which he shares with Desdemona. He is a Moor, yet respected by all. His flaws are that he lets others think for him and becomes jealous very easily and is overly prideful. He is middle-aged and very eloquent, but believes his manners and words are “rough”.

3 Desdemona A young Venetian woman, daughter to Barbantio who falls in love with and marries Othello. Her flaw is that she is overly virtuous and somewhat naïve. She is stronger than Othello believes her to be, and is not the private, withdrawn woman he would ideally like her to be. She loves him very much and even travels with him to Cyprus to be close to him.

4 Brabantio Desdemona’s humbling father who is very overprotective of his daughter. He maintains a very respectable position in the Venetian senate. He represents those who believe that interracial marriages are wrong.

5 Cassio A soldier from the rival city of Florence, fighting for Venice. Cassio becomes despised by Iago when he receives a position for lieutenancy that Iago desired. He is close friends with Desdemona, but loves Bianca, a courtesan. He has little field experience and is smooth-talking, the opposite of Othello, in many respects, which is why Othello admires him.

6 Iago The villain of the play, his rage is fueled when Cassio receives a promotion over him. He is Othello’s ensign. He believes that Othello has slept with his wife because he is paranoid so he strives to ruin the reputation and life of Othello. He seeks justice in attempting to destroy Othello and uses every means and every person available to assist him in his plan but never shows his treachery to those he is dealing with. He is immoral but very keen and perceptive which enables him to manipulate people into the traps he sets without them ever being aware.

7 Emilia Iago’s faithful wife who believes that wives should do all within their power to help their husbands advance in life. She is Desdemona’s constant companion and sometimes bedfellow while they are in Cyprus. She is loyal to Desdemona and unaware of her husband’s dark qualities and ill intentions.

8 Roderigo A gentlemen in love with Desdemona. He is constantly tricked by Iago because he is easily manipulated and has a weakness for the need to win Desdemona’s love. His hope is to do so by first helping assist Iago in his plan to destroy Othello.

9 Duke of Venice Ruler of the city and Othello’s superior. He allows Othello and Desdemona to stay together despite her father’s protests and disapproval. He sends Othello off to Cyprus to battle the Moors.

10 Senators Other authority figures of Venice, and men of reason and order; they also support Othello and Desdemona’s union. Othello answers to them and the Duke in matters of war.

11 Bianca A courtesan who Cassio visits frequently. She is the only woman in the play whom Cassio shows little respect to.

12 Montano Governor of Cyprus; used to assist the closure or resolution of the play. He is the main law and order figure of Cyprus and serves as damage control after a tragic occurrence near the end of the play.

13 Lodovico and Gratiano Two Venetian nobles, both of some relation to Desdemona. Serve a purpose in delivering a message near the end of the play to officials in the city of Venice.

Download ppt "Othello by William Shakespeare Character List. Othello A Venetian general considered to be a good leader by all. He has many interesting stories about." 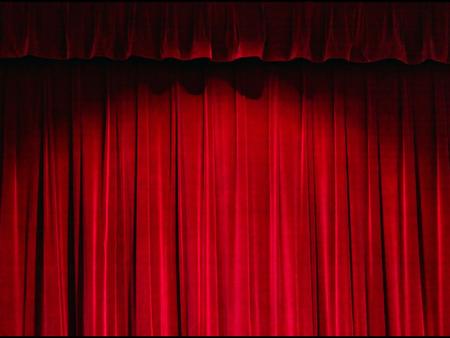 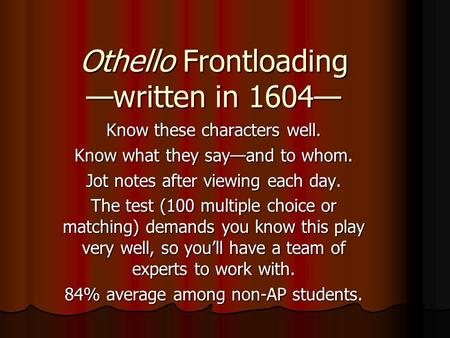 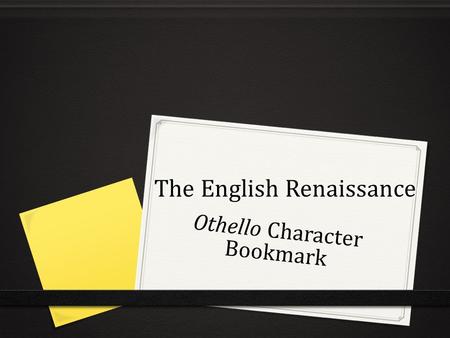