2 13-2 Manipulating DNA A. Tools of Molecular Biology
Scientists use their knowledge to transfer genes, rewrite DNA codes, and eliminate mutations to create the best possible genetic outcome. This new science is called Genetic Engineering. Genetic engineering - making changes in the DNA code of a living organism.

3 Techniques of Genetic Engineering
1. DNA Extraction = DNA is extracted from cells by a simple chemical procedure. 2. Cutting DNA - Scientists use restriction enzymes to reduce DNA into fragments that can be easily analyzed. restriction enzymes – an enzyme that cuts DNA at a specific sequence of nucleotides.

7 B. Using the DNA Sequence
With the DNA fragments separated, DNA molecules can now be read, studied and changed. 1. Reading the sequence - The fragments that are separated in gel electrophoresis can be tagged with different dyes. The fragments are placed in a test tube with DNA polymerase, four nucleotide bases, and a small number of bases that have a chemical dye attached.

9 2. Cutting and Pasting - It is possible to make synthetic sequences of DNA to be spliced with natural occurring sequence using enzymes. These same enzymes make it possible to take a gene from one organism and attach it to the DNA of another chromosome. This DNA is sometimes called recombinant DNA. Recombinant DNA – DNA produced by combining DNA from different sources.

10 13-4 Genetic Engineering Genetic engineering has spurred the growth of biotechnology. With this new science, researchers are able to construct organisms that are transgenic. Transgenic Organisms - A species that contains genes from other species.

11 13-4 Genetic Engineering A gene from one organism can be inserted into cells of another organism. Transgenic microorganisms are now used to produce a wide variety of substances useful for health and industry. Examples: insulin production and human growth hormones.

12 2. Transgenic Plants and Animals
The major concept is that these organisms are being widely used to improve our food supply. This generation of plants and animals are now a major percentage of our total food supply and are known as genetically modified foods (GM foods).

13 3. Cloning A clone is a member of a population of identical cells produced from a single cell. The use of cloning technology is controversial because it raises ethical and moral issues. 1997: Dolly, the lamb, was the first mammal cloned from an adult cell.

15 Figure 13-13 Cloning of the First Mammal
A donor cell is taken from a sheep’s udder. Donor Nucleus These two cells are fused using an electric shock. Fused Cell Egg Cell The nucleus of the egg cell is removed. An egg cell is taken from an adult female sheep. The fused cell begins dividing normally. Cloned Lamb Embryo The embryo develops normally into a lamb—Dolly The embryo is placed in the uterus of a foster mother. Foster Mother

17 DNA Fingerprinting Restriction enzyme
Chromosomes contain large amounts of DNA called repeats that do not code for proteins. This DNA varies from person to person. Here, one sample has 12 repeats between genes A and B, while the second sample has 9 repeats. The DNA fragments are separated according to size using gel electrophoresis. The fragments containing repeats are then labeled using radioactive probes. This produces a series of bands—the DNA fingerprint. Restriction enzymes are used to cut the DNA into fragments containing genes and repeats. Note that the repeat fragments from these two samples are of different lengths.

18 14-3 Human Molecular Genetics
E. Gene Therapy - the process of changing the gene that causes a genetic disorder. In gene therapy an abnormal or faulty gene is replaced by a normal working gene. This way the body can make the correct protein or enzyme to eliminate the disorder. 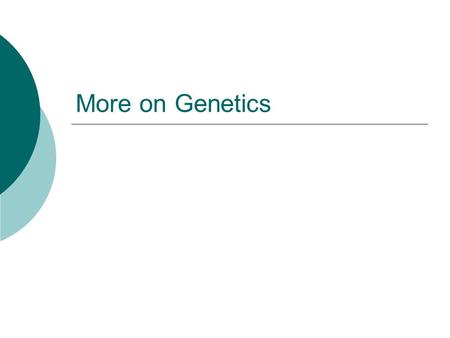 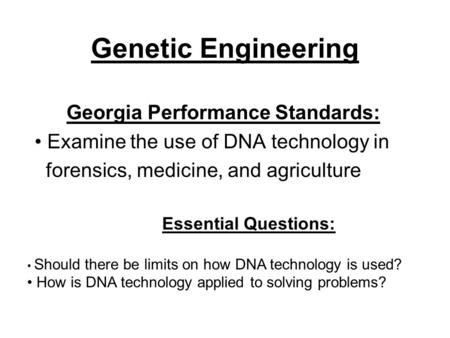 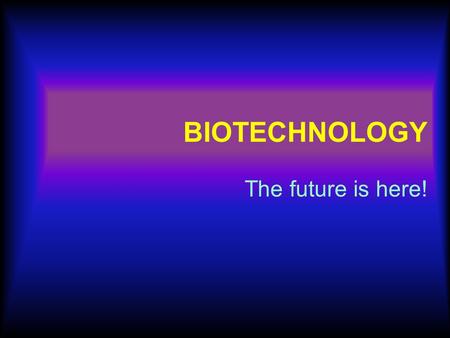 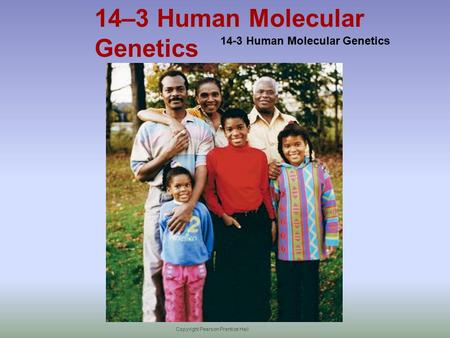