Presentation on theme: "WHAT IS PERSONALITY? Why would we want to study personality?"— Presentation transcript:

1 WHAT IS PERSONALITY? Why would we want to study personality?
In getting to know ourselves Why are we having difficulty in deciding on a career path while others have made their decision? We are sometimes rude to our romantic partner even though our love for him or her is overwhelmingly clear to us. Why are we competitive with others when playing a friendly game with others? Making sense of these and other experiences can help us to make adaptive changes in our life and live more satisfying lives. We confront and resolve our inner conflict. Establish and clarify goals that motivate us and focus our efforts enabling us to experience personal growth within the context of making contributions to society. In getting to know others: Why one of our friends refuses to date someone we find particularly attractive? Why is one student fascinated by astronomy while we find it difficult to listen attentively for more than 10 mins? Why a quiet self-effacing person who is well-liked by neighbours and relatives should suddenly decide to enter a small Amish schoolhouse and begin to slaughter students? This satisfies our curiousity but also gives us a greater control over our lives and makes the world more predictable and less threatening.

2 OUTLINE Exercise 1: “Who am I?” Defining personality What is a theory?
Why do we need a theory? What makes a good theory? Explicating the assumptions of theories Exercise 2: Making your assumptions explicit. The importance of culture

3 CAN WE DEFINE PERSONALITY?
As others see us i.e. the persona Enduring Stable Characteristics Every human is unique As others see us: Personality comes from the Latin word persona. Although the term personality is frequently used, it is not easy to define. In common speech, it is usually refers to one’s public image. For example, people say “Becky has a terrific personality” or “if only Jeff has a more dynamic personality” and so on. Such usage reflects the origins of the term ‘personality’ from the Latin term ‘persona’ which refers to masks used by actors in a play. So does personality refer to outward characteristics i.e. external, visible only? So personality can be a) what we appear to be to others i.e. what others see and b) the roles we play (because the actors would change personae to show the audience that they were playing a different role. Enduring Stable Characteristics: personality characteristics are relatively enduring and stable. There was a controversy between nature vs. nurture i.e. the enduring personality variables such as traits and needs versus variables relating to the situation. Led to an interactionist approach which looked at enduring and stable personality traits, changing aspects of the situation and the interaction between them must all be considered for a full explanation of human nature. The idea of human uniqueness: Although a lot of people have similarities, each person has some qualities which distinguish one person from another. The study of personality is a study of individual differences that help to account for why and how people react differently, uniquely and even creatively to various environmental or situational demands.

5 There are two major approaches to the study of personality based on the purpose :
Academic Psychology where the study of personality usually focused on uncovering the general principles of personality through research methods such as correlations and experiments. Studies are typically conducted in a lab setting. Precursor: Wilhelm Wundt Clinical Practice: the study of personality primarily through research on individuals by way of methods such as case histories. These studies are typically conducted in a psychotherapeutic or clinical environment. Precursor: Sigmund Freud. Personality has been an elusive concept for many years because human nature and behavior is so complex. There is little agreement among theorists on the appropriate use of the term personality. As we will learn: Gordon Allport described and classified over 50 different definitions! For him, personality was something real within an individual that leads to characteristic behaviours and thoughts. For Carl Rogers, the personality or the “self” was an organized consistent pattern of perception of the “I” or “me” that lies at the heart of an individual’s experience For Skinner, the concept is unnecessary when attempting to understand human behavior For Freud, the father of psychoanalysis, personality was largely unconscious, hidden and unknown. So each theorist has his/her own understanding of the term “personality”. This explains why there are so many different personality theories. Each theory offers insight into the question of the self and each can be helpful to us as we develop our own explanations of human behavior.

9 Behaviors and characteristics of individuals are observed through observation and experimentation. On the basis of these

12 Parsimonious The theory explains things concisely. A theory should be no more complicated than it needs to be after it has addressed being comprehensive and verifiable. When two explanations have the same ability to predict phenomenon, the simpler explanation is preferred (e.g., Horney’s explanation of women’s development does not include penis envy)

14 Productive The theory should be useful to explain phenomena and lead to new ideas, new predictions and to new research. We should learn more about the phenomenon than we currently do. This learning should come about from the empirical testing or propositions derived from the theory’s assumptions. Generation can be systematic (i.e., confirmation of premises), or heuristic (i.e., suggesting ideas or even arousing disbelief and opposition)

15 Explicitly stated assumptions
Nature of assumptions usually represents the distinctive qualities of the theory A theory should have a set of relevant assumptions that are clearly stated (e.g., earth is the center of the universe) Assumptions should be related to each other (e.g., because earth is center of creation all planets and stars revolve around the earth)

16 Some basic philosophical assumptions
Freedom vs. determinism: Do people have control over their behaviors and understand the motives behind them? Or, are the behaviors of people determined by internal or external forces over which they have little, if any, control? Heredity vs. environmental: Do inherited and inborn characteristics or factors in the environment have the more important influence? Uniqueness vs. Universality: Is each individual is unique and cannot be compared with others or are people basically very similar in nature?

17 Some basic philosophical assumptions
Proactive vs. Reactive: Do human beings act on their own initiative rather than merely reacting? Are the sources of behaviour within the individual who does more than just react to stimuli from the outside world? Optimistic vs. pessimistic: do significant changes in personality and behavior occur throughout the course of a lifetime? If an individual is motivated, can genuine changes be effected in personality? Can we help others to change by restructuring their environment?

18 Exercise 2 Rate your assumptions Break up into small groups
Identify the responses you have marked as 1 or as 5 Discuss Any actions or behaviors that serve as examples of your assumptions and influence your response How your own cultural, familial, socioeconomic and religious context influences your responses Share insights or experiences with the larger group

19 Large Group Discussion
From the Betancourt & Lopez article: Why is the concept of culture important in personality theories? How do your assumptions, life experiences and culture of origin influence your personal theory of personality? “Progress in the understanding of culture and its role in psychology would result in more universal principles and theories”.

Download ppt "WHAT IS PERSONALITY? Why would we want to study personality?" 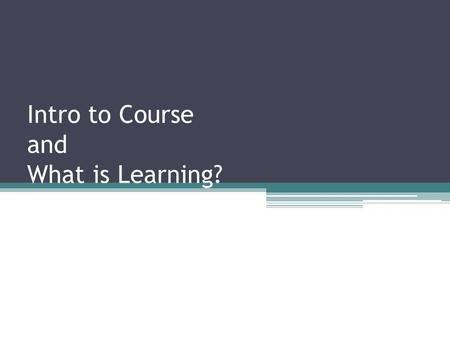 Intro to Course and What is Learning?. What is learning? Definition of learning: Dictionary definition: To gain knowledge, comprehension, or mastery through. 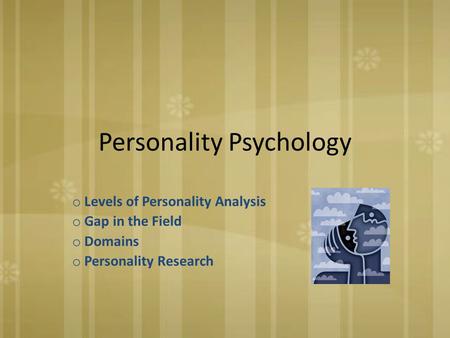 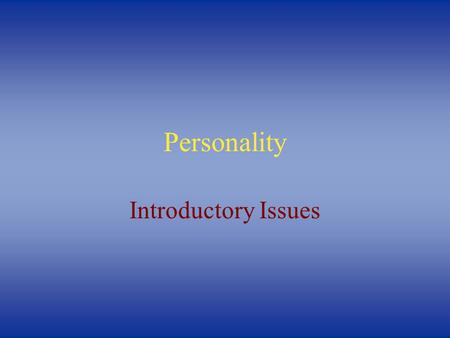 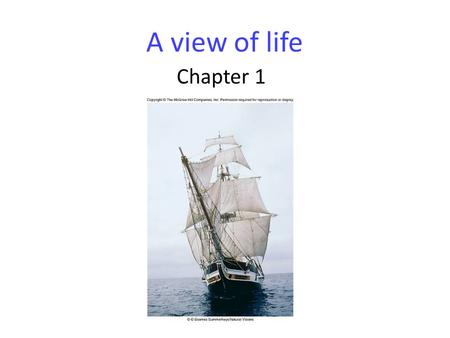 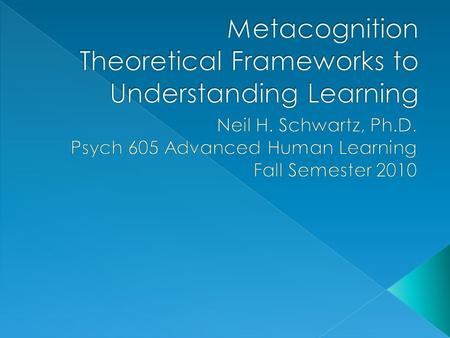  Metacognition refers to a learner’s ability to be aware of and monitor their own learning processes.  Usually defined by it’s component parts. 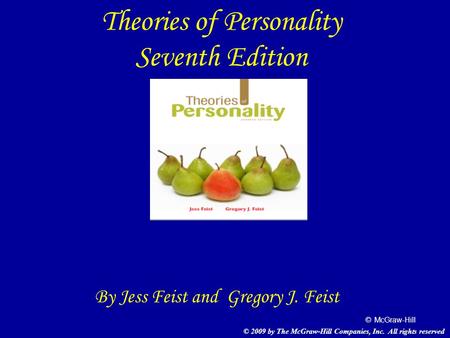 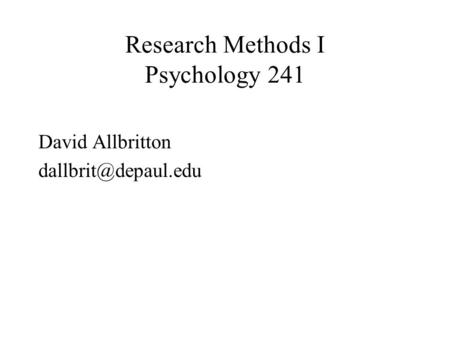 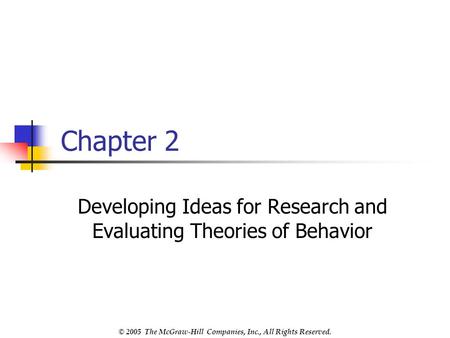 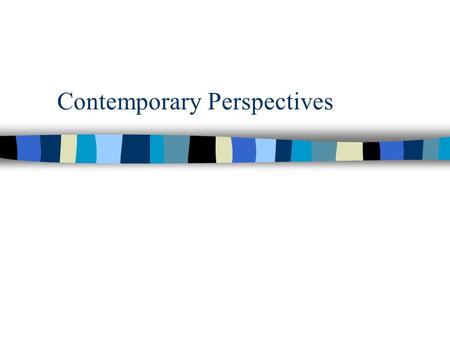 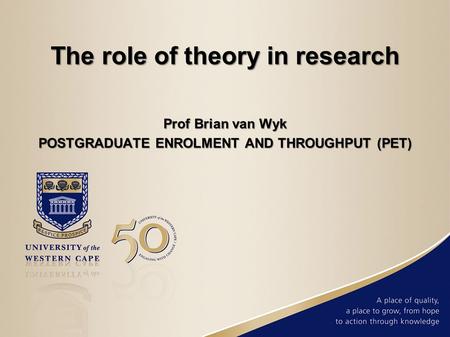 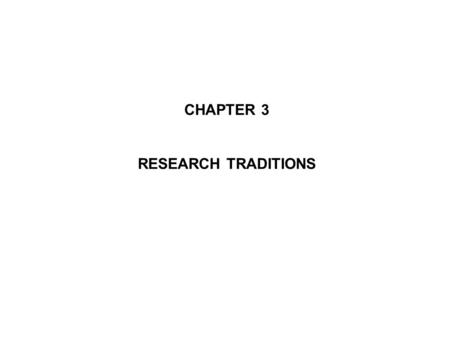 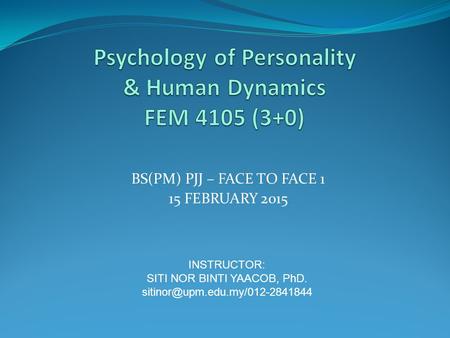 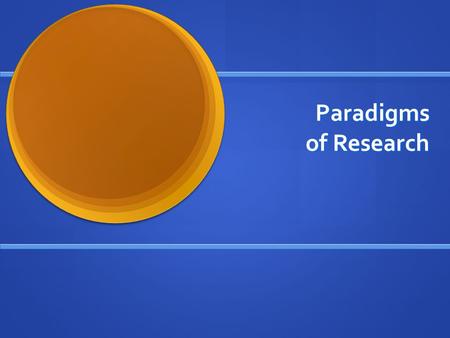 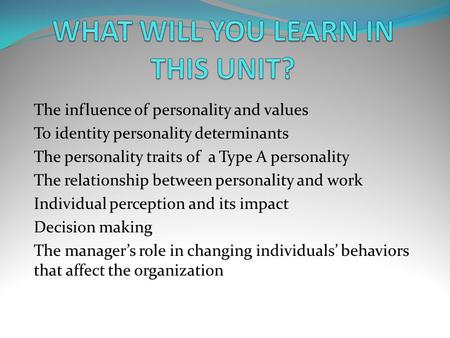 WHAT WILL YOU LEARN IN THIS UNIT? 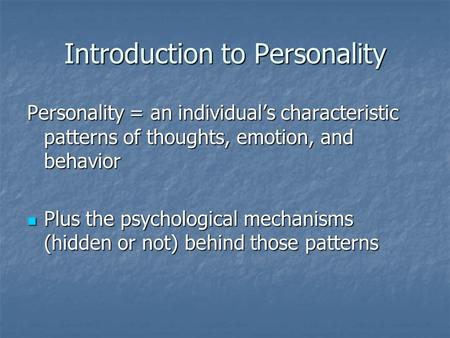 Introduction to Personality Personality = an individual’s characteristic patterns of thoughts, emotion, and behavior Plus the psychological mechanisms. 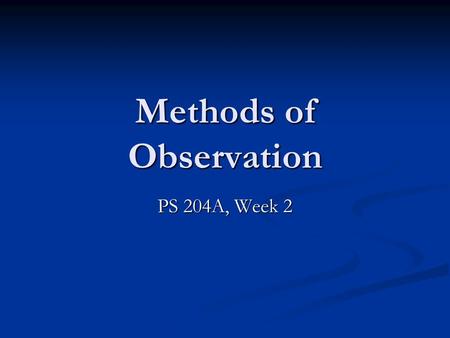