2 Key Issue 1 Where Is the World’s Population Distributed?

3 Critical Issues in Population Geography
More people are alive today than at any other time in human history-about 7.2 billion people! The world’s population increased at a faster rate during the second half of the twentieth century than ever before. Virtually all population growth today occurs in less developed countries (LDCs). The scientific study of population characteristics is called demography.

5 World Population Cartogram
Fig. 2-1: This cartogram displays countries by the size of their population rather than their land area. (Only countries with 50 million or more people are named.)

6 World Population Distribution
Fig. 2-2: World population is very unevenly distributed across the Earth’s surface and it can be compared to climate distribution.

9 Expansion of the Ecumene 5000 B.C.–A.D. 1900
Fig. 2-3: The ecumene, or the portion of the Earth with permanent human settlement, has expanded to cover most of the world’s land area.

10 Where Is the World’s Population Distributed?
Population density-see p.51-53 Arithmetic density-total # of people divided by total land area; also called population density Physiological density-# of people supported by a unit of arable land the higher the physiological density, the greater the pressure that people place on the land to produce enough food. Agricultural density-# of farmers per unit of arable land MDCs usually have lower agricultural densities b/c finance and technology allow fewer people to farm larger land areas.

14 Key Issue 2 Where Has the World’s Population Increased?

16 World Population Growth 1950–2000
Fig. 2-6: Total world population increased from 2.5 to 6 billion in this half century. The natural increase rate peaked in the early 1960s and has declined since, but the number of people added each year did not peak until 1990.

18 Crude Birth Rates Fig. 2-8: The crude birth rate (CBR) is the total number of births in a country per 1,000 population per year. The lowest rates are in Europe, and the highest rates are in Africa and several Asian countries.

19 Crude Death Rates Fig. 2-12: The crude death rate (CDR) is the total number of deaths in a country per 1,000 population per year. Because wealthy countries are in a late stage of the demographic transition, they often have a higher CDR than poorer countries.

20 Where Has the World’s Population Increased?
Fertility Total fertility rate (TFR) The average # of births in a society; average # of children a woman will have throughout her childbearing years ages 15-49) Attempts to predict the future behavior of women around the world

21 Total Fertility Rates Fig. 2-9: The Total fertility rate (TFR) is the number of children an average woman in a society will have through her childbearing years. The lowest rates are in Europe, and the highest are in Africa and parts of the Middle East.

22 Where Has the World’s Population Increased?
Mortality Infant mortality rate (IMR) The annual # of deaths of infants under one year of age, compared with total live births; expressed per 1,000 live births rather than as a percentage. The highest rates are in the poorer countries of sub- Saharan Africa and the lowest rates are in Western Europe. In general, the IMR reflects the healthcare of a country. Life expectancy The average # of years a newborn infant can expect to live at current mortality levels. Most favorable in Western Europe (late 70s) and least favorable in sub-Saharan Africa (late 30s).

25 Key Issue 3 Why Is Population Increasing at Different Rates in Different Countries?

26 Why Is Population Increasing at Different Rates?
All countries have experienced some changes in natural increase, fertility, and mortality rates, but at different times and at different rates. Although rates vary among countries, a similar process of change in a society’s population, known as the demographic transition, is operating. Because of differences among countries, the demographic transition diffuses to each country at different rates and produces local variations. This process has several stages and every country is in one of them.

30 Why Is Population Increasing at Different Rates?
Demographic transition Four stages: Stage 4: Low growth-p.60-62 Zero population growth (ZPG) occurs when the CBR declines to the point where it equals the CDR, and the NIR approaches zero. A TFR of approximately 2.1 produces ZPG.

32 Demographic Transition in England
Fig. 2-14: England was one of the first countries to experience rapid population growth in the mid-eighteenth century, when it entered stage 2 of the demographic transition.

34 Why Is Population Increasing at Different Rates?
Population pyramids-p.62-63 A bar graph showing a place’s age and sex composition Shape of the pyramid is determined mainly by the CBR Age distribution Dependency ratio-# of people too young or too old to work, compared to # of people in their productive years. Sex distribution Sex ratio-# of males per 100 females in the pop.

36 Percent of Population under 15
Fig. 2-15: About one-third of world population is under 15, but the percentage by country varies from over 40% in most of Africa and some Asian countries, to under 20% in much of Europe.

38 Rapid Growth in Cape Verde
Fig. 2-17: Cape Verde, which entered stage 2 of the demographic transition in about 1950, is experiencing rapid population growth. Its population history reflects the impacts of famines and out-migration.

40 Low Growth in Denmark Fig. 2-19: Denmark has been in stage 4 of the demographic transition since the 1970s, with little population growth since then. Its population pyramid shows increasing numbers of elderly and few children.

42 Key Issue 4 Why Might the World Face an Overpopulation Problem?

43 Why Might Overpopulation be a Concern?
Thomas Malthus on overpopulation: One of the first to argue that the world’s rate of population increase was far outrunning the development of food supplies. An Essay on the Principle of Population (1798): Population grows geometrically while food supply grows arithmetically

44 Why Might Overpopulation be a Concern?
Neo-Malthusians: Argue that 2 characteristics of recent population growth make Malthus’s thesis even more scary than it was 200 years ago: Malthus failed to predict that LDCs would have the most rapid pop growth because of medical technology not wealth World pop is not only exceeding food production, but other resources, like clean air, suitable farmland, and fuel

45 Why Might Overpopulation be a Concern?
Criticism of Malthus includes the following: Pessimistic viewpoint Ideas based on a belief that the world’s supply of resources is fixed rather than expanding. Failure to consider technological innovation Larger pop could stimulate economic growth Marxist critique Argue that issues like poverty, hunger, and social welfare problems are due to unjust social and economic institutions, not pop growth

51 Why Might Overpopulation be a Concern?
World health threats The epidemiologic transition Stage 1: Pestilence and famine The Black Plague Pandemics

52 Why Might Overpopulation be a Concern?
World health threats The epidemiologic transition Stage 2: Receding pandemics Cholera and Dr. John Snow

53 Cholera in London, 1854 Fig. 2-23: By mapping the distribution of cholera cases and water pumps in Soho, London, Dr. John Snow identified the source of the waterborne epidemic.

55 Why Might Overpopulation be a Concern?
World health threats The epidemiologic transition A possible stage 5: Reemergence of infectious diseases? Three reasons why it might be happening: Evolution of disease Poverty Improved travel

56 Tuberculosis Death Rates, 2000
Fig. 2-24: The tuberculosis death rate is a good indicator of a country’s ability to invest in health care. TB is still one of the world’s largest infectious-disease killers.

57 SARS Infections in China, 2003
Fig. 2-25: China had 85 percent of the world's SARS cases in Within China, the infection was highly clustered in Guangdong Province, Hong Kong, and Beijing. 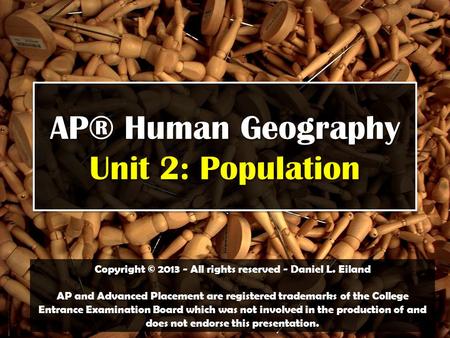 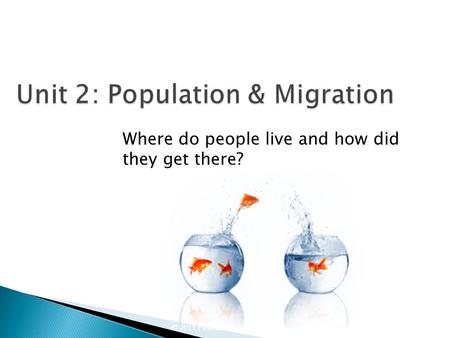