2 The Negro Speaks of Rivers
I've known rivers: I've known rivers ancient as the world and older than the flow of human blood in human veins. My soul has grown deep like the rivers. I bathed in the Euphrates when dawns were young. I built my hut near the Congo and it lulled me to sleep. I looked upon the Nile and raised the pyramids above it. I heard the singing of the Mississippi when Abe Lincoln went down to New Orleans, and I've seen its muddy bosom turn all golden in the sunset. Ancient, dusky rivers.

4 I’ve known rivers ancient as the world and older than the
Line 2 Simile-old as the planet earth Provides a sense of time, history

5 Flow of human blood in human veins.
Line 3 The speaker knows rivers older than humans Again, provides a sense that he goes back to the beginning of time Creates a metaphor: the rivers represent history, heritage, spirit, wisdom of Africans and African Americans (Negroes in this era)

9 I looked upon the Nile and raised the pyramids above it.
Line 7 The Nile is the longest river in the world running through the continent of Africa The Nile has very fertile banks, implication of continual growth Speaker implies that he was involved in the building of the pyramids (one of the seven wonders of the world); they were once believed to be built by 100,000 slaves, but later discovered to be built by peasants

10 I heard the singing of the Mississippi when Abe Lincoln
Line 8 The Mississippi flows through 10 states, beginning in Minnesota and spilling into the Gulf of Mexico This river was instrumental in the transportation of slaves Abraham Lincoln, at ages 19 and 21, rode a flatboat down the Mississippi to New Orleans and witnessed the horrors of slavery. Personification: the river is “singing,” perhaps to preserve faith and hope like Negroes singing spirituals

11 went down to New Orleans, and I’ve seen its muddy
Line 9 “muddy” The Mississippi is known for its murkiness from soil and dirt displaced on the bottom of the river---great for Catfish “muddy” may also reference skin color of the slaves

12 bosom turn all golden in the sunset
Line 10 Personification- the river is presented as a woman, “bosom” source of nourishment and nurture “golden” the muddiness is changed, brightened and perceived as positive which represents emancipation Imagery- the river gold from the sunset

13 I’ve known rivers: Line 11
Again, the speaker has a significant bond with rivers

14 Ancient, dusky rivers. Line 12 “dusky” referring to skin color
“dusky” representing shadows of the past that continue to haunt the speaker

15 My soul has grown deep like the rivers.
Line 13 This refrain adds musicality to the poem and provides a cyclical effect

16 RIVERS… have a source, a place where they begin flow in one direction , like time are powerful (consider the Grand Canyon); they leave a scar on the earth Attract people to their banks because they offer transportation, fertilization, and food

17 Enjambment The continuation of the sense and therefore the grammatical construction beyond the end of a line of verse or the end of a couplet. Enjambment in this poem creates the sense of the rivers’ flow and winding path. I've known rivers: I've known rivers ancient as the world and older than the flow of human blood in human veins. My soul has grown deep like the rivers. I bathed in the Euphrates when dawns were young. I built my hut near the Congo and it lulled me to sleep. I looked upon the Nile and raised the pyramids above it. I heard the singing of the Mississippi when Abe Lincoln went down to New Orleans, and I've seen its muddy bosom turn all golden in the sunset. Ancient, dusky rivers.

18 Light and Dark Images of light and dark throughout this poem remind the reader of the confinement and eventual freedom of the Negroes Muddy, dusky, nights asleep by the Congo Golden sunsets, the Mississippi turns golden

19 The Rhythm Ossie Davis (actor, playwright, activist):
“Langston Hughes belongs to whoever is listening. A possession in common, like the sights and sounds of a streetcorner hangout, or the barbershop debate over pretty girls’ legs, and baseball players: Open your ears and your heart if you’ve got one; Langston will walk right in and do the rest. His thoughts come naked, conceived in the open, only at home in the public domain. Free without charge, like water, like air—like salted peanuts at a Harlem rent party. Come in, have one on me—that’s Langston’s style; a great host; a perfect bartender; dishing it up, iambic pentameter on the rocks and on the house, fresh wrote this morning. Dead now, but still alive. Ol’ Langston in the corners of my mind.” This poem rocks us like a boat on its way down a gentle river at night.

20 Themes Perseverance-The speaker’s soul is as deep as the rivers because he has persevered Race-The image of the Mississippi River turning to gold is a symbol for freeing the slaves Memory and the Past-The speaker in “The Negro Speaks of Rivers” redefines history Freedom and Confinement-At the end of the poem, our speaker is free

21 Inception Langston Hughes wrote “The Negro Speaks of Rivers” while on a train ride to Mexico, where he would live with his father for one year. He had just graduated from high school in Cleveland, Ohio, making him a mere eighteen years old. The poem was published in Crisis Magazine in 1921, a year later. When his train crossed the Mississippi River, Hughes was inspire by its beauty and was also reminded of its role in sustaining slavery in America. The sun was setting and Hughes had a long journey ahead of him He took out a letter his father had written him and wrote this poem on the back of its pages. 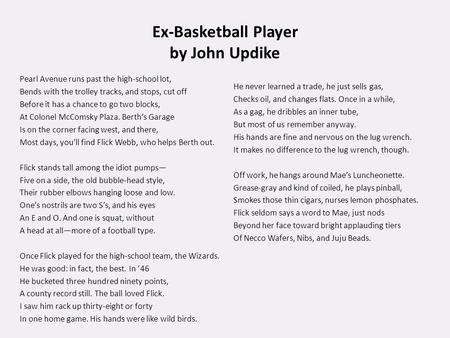 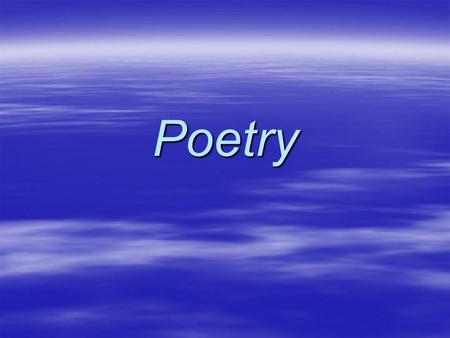