2 Presentation Content Rules of different branches of Judaism, Christianity, & Islam Specific women in western religions today Scriptures and how they relate to change in each religion

3 Women in Judaism Today Different branches different rules: Reform/Reconstructionism: –Not uncommon to see female Rabbis or female Cantors. –Women can have equal roles in leading prayers and reading Torah. Conservative: –Uncommon to see a female Rabbi/Cantor, but not unheard of. –Men and women may be separated.

4 Women in Judaism Today Orthodox: –Women are not allowed to be rabbis/cantors, –Cannot read Torah, or even be on the Bima during services. –Women and men sit separately.

5 Advancement for Women in Judaism Esther 1: 12 – 20 shows how women were treated in the biblical days. –How has this changed for each Jewish denomination today? –Orange on the Seder Plate 2 Kings 22:14 - 17

6 Jewish Women in Leadership Today Rabbi Melanie Aron of Congregation Shir Hadash in Los Gatos relayed a much more heartening story about a lay-led Reform community in Eastern Europe. Worshippers had grown to the point where they felt they needed a rabbi, so they selected one member of their community and sent her to rabbinical school.

7 Women in Christianity Today Protestant –Different branches, different rules: –Conservative Branches Still have ALL male clergy –Liberal Branches Women can be pastors Women are treated equal to men in almost every aspect of the church

9 Women in Christianity Today Roman Catholic –Today have more leadership than before the Second Vatican Council –Women cannot be priests –Women can hold offices that are nearly equal to that of a priest –Because of the decline of priests, lay women (religious or laity) have stepped up to lead communities and organizations.

12 Advancement for Women How Far Have They Come? Christianity –Ephesians 5:21 – 32 & 6:1 – 9 –What is the Bible trying to say about the way people should treat one another? –Has this changed over time? How so?

13 Women in Islam Today Fully emancipated Enjoy all rights and privileges that men have Are not second grade members of community Entitled to all rights on the basis of equality Women have played a vital role in all times, in peace and war. “Today, the modern Muslim woman is like any other women in the world, striding shoulder to shoulder, with man” (Jacket).

14 Women, as well as men, are encouraged to become as educated as they can Women becoming scholars Right to have an official position in a mosque is disputed by many –How about Women Imams? Surah 24:31 Surah 4:34 Women in Islam Today

15 Advancement for Women in Islam Recent events –On February 20, 2007 a female Pakistani minister, Zilla Huma Usman was shot dead by a Muslim man Mohammad Sarwar who stated, "I have no regrets. I just obeyed Allah’s commandment," adding that Islam did "not allow women to hold positions of leadership.“

17 Questions: In your opinion, in the three western religions today how have women become the more involved? In which branch of Christianity are women allowed to become priests? Why do people debate over women not being Imams?

18 In which more traditional practices are women kept separate for prayer today? In which branch(s) of Judaism are women allowed to be on the Bima during prayer? In which branch of Christianity can women and men hold equal leadership positions? Can Jewish women be Rabbis or Cantors?

19 What did you find interesting about women in the three religions today? According to Islam are women fully emancipated? Are Muslim women allotted equal rights as men?

20 Other Questions?? The End 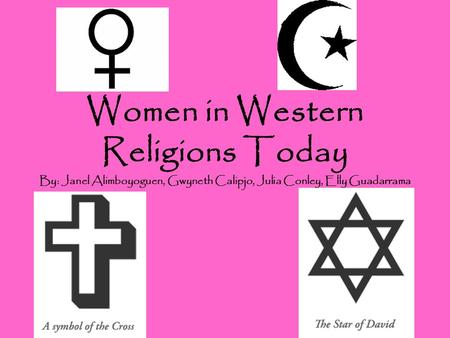 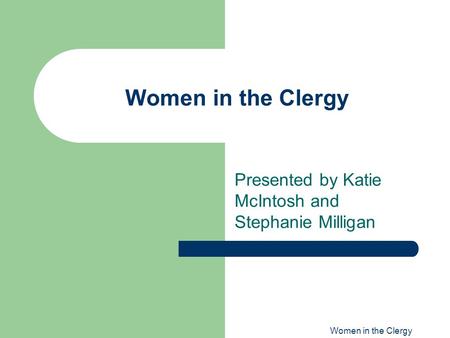 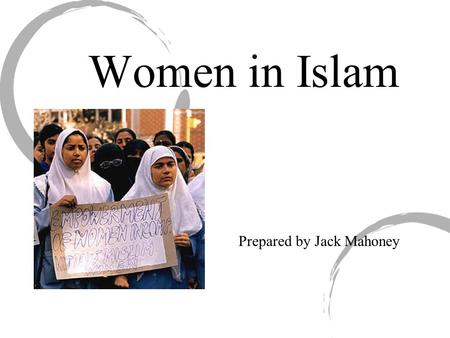 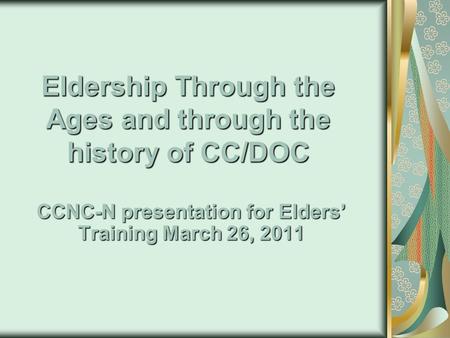 Eldership Through the Ages and through the history of CC/DOC CCNC-N presentation for Elders’ Training March 26, 2011. 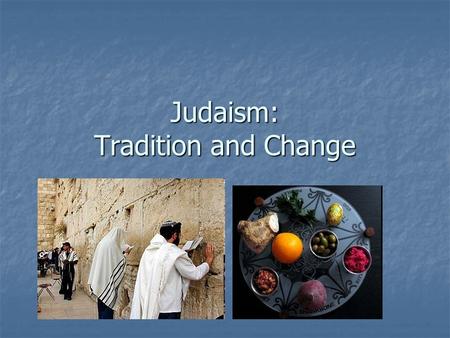 Judaism: Tradition and Change. Distinctive characteristics Dialogical Dialogical Jewish history is “a continuing dialogue with God” rooted in a covenant. 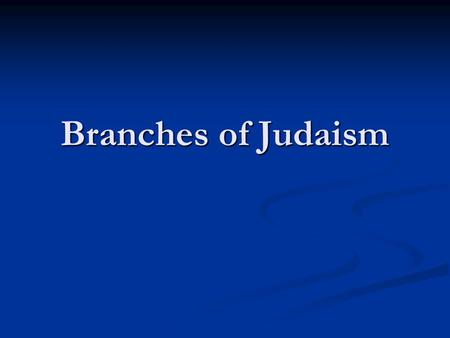 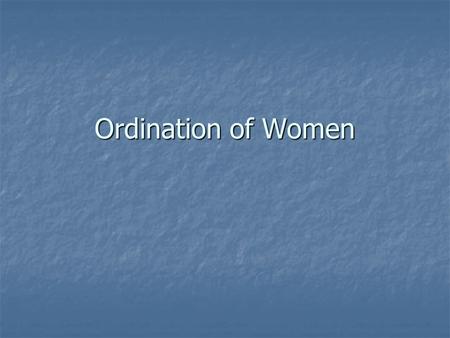 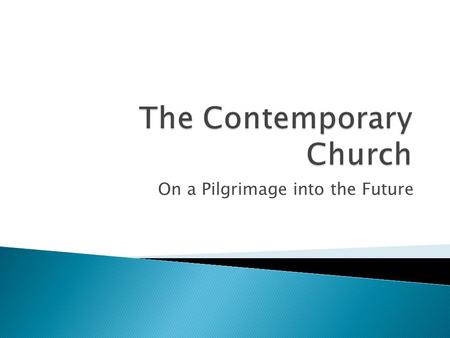 On a Pilgrimage into the Future.  Much growth in the church  60% of Catholics live in Asia, Africa, and Latin America  Renewed in dramatic ways ◦ Vatican. 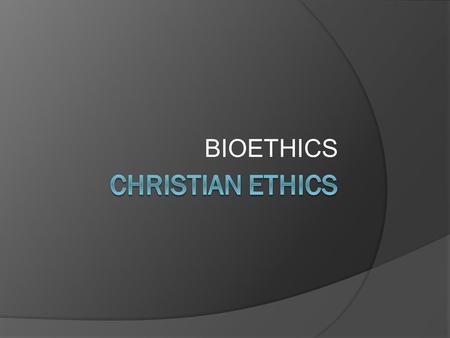 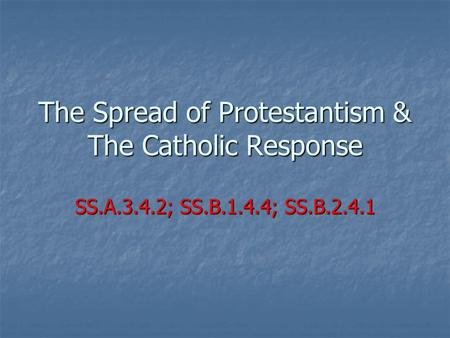 The Spread of Protestantism & The Catholic Response 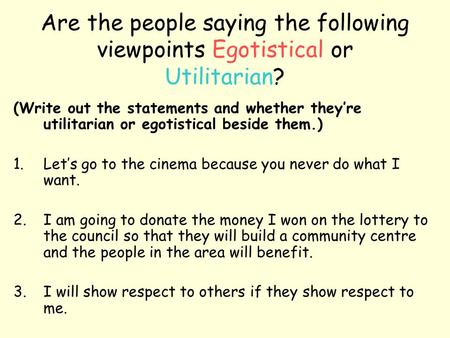 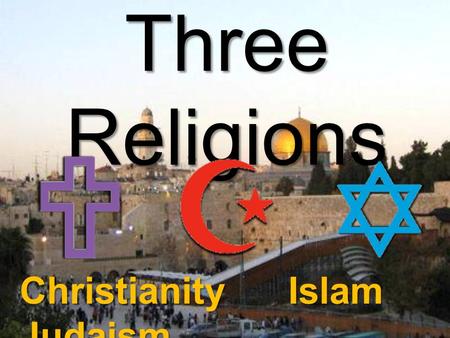