By: Kyle Greulach. Entering the Field  Basically, a Mechanical Engineer uses math and science to find technical solutions for problems such as design,

Presentation on theme: "By: Kyle Greulach. Entering the Field  Basically, a Mechanical Engineer uses math and science to find technical solutions for problems such as design,"— Presentation transcript:

2 Entering the Field  Basically, a Mechanical Engineer uses math and science to find technical solutions for problems such as design, construction, and manufacturing.  An engineer in general should take as many math and science classes as possible in high school. Computer science is also preferred among incoming engineers. Physics, Calculus, Algebra, and Chemistry are a few examples of classes to take in high school.  According to salary.com, the median expected salary for a Mechanical Engineer is $61,702 a year

4 GENERAL ELECTRIC (GE) GE is one of the world’s largest engineering companies. They make all types of things such as appliances, software, transportation, electricity, and airplane engines. My parents are both engineers at GE with degrees in Aerospace and Mechanical engineering. They work on designing, processing, and testing airplane and jet engines. http://www.ge.com/ GEnX Engine Building and Testing Video

5 The Babcock & Wilcox Company produces many products but is most famous for producing boilers. Boilers are basically steam generators that use heat to convert water into steam for a variety of applications. They are mainly used for electric power generation and industrial process heating though. The Babcock & Wilcox Company also work a lot with nuclear energy and build commercial nuclear plant components as well as nuclear reactors. http://babcock.com/

7 Karl Benz is a German engine designer and car engineer. He is regarded as the inventor of the gas-powered automobile. Benz began his work on a two-stroke engine, in hopes of finding new income. He received his first patent in 1879. In 1883 he founded Benz & Company to produce industrial engines. He worked on a four-stroke engine which was his “motor carriage”. H designed the engine for a three-wheeled vehicle with an electric ignition, differential gears, and water-cooling. He received a patent for it and in July of 1886, he sold his automobile to the public. The company was later named Mercedes-Benz after a 1901 Mercedes by Daimler, and Karl Benz’s first automobile in 1886. The 1886 automobile is said to be the first one ever.

Download ppt "By: Kyle Greulach. Entering the Field  Basically, a Mechanical Engineer uses math and science to find technical solutions for problems such as design," 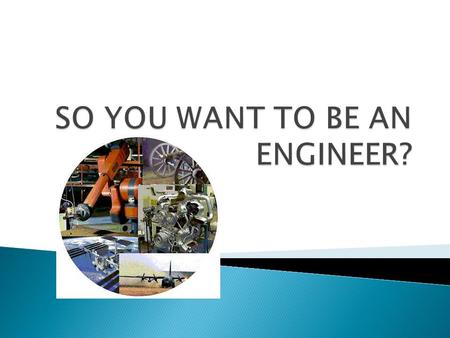  Have you always wanted to build things, play with legos, take apart TVs, or simply wanted to know how things work?  Do you have a love of math and. 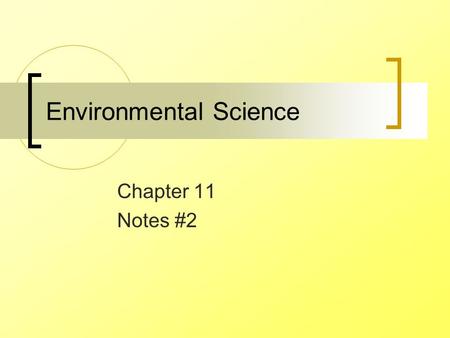 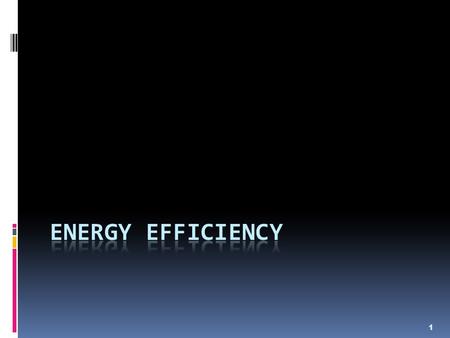 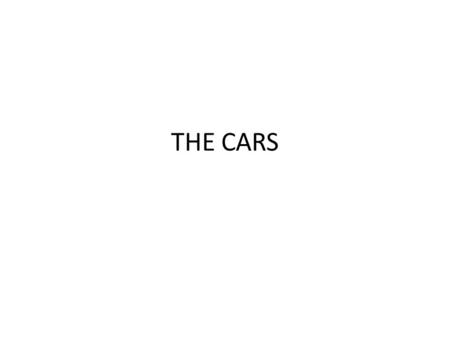 THE CARS. THE EARLY AUTOMOBILE German engineer Karl Benz, the inventor of numerous car-related technologies, is generally regarded as the inventor of. 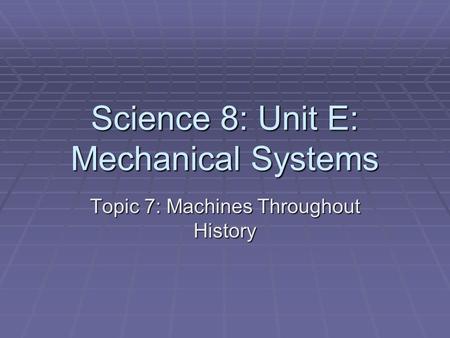 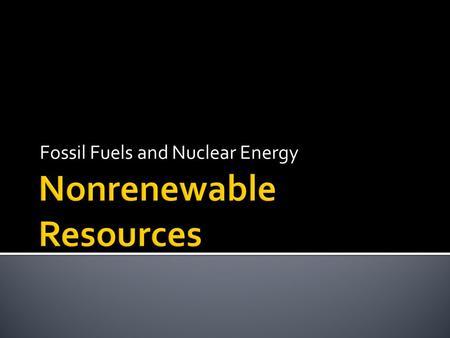 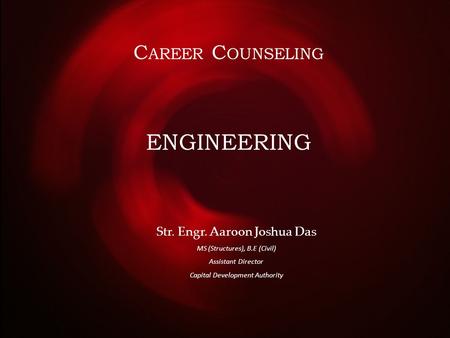 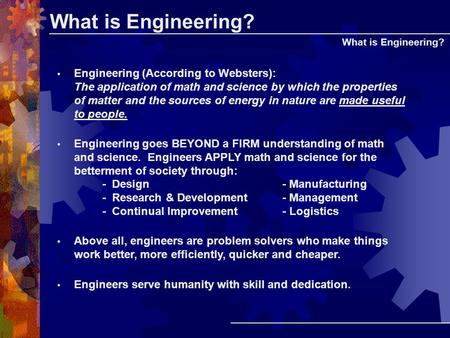 What is Engineering? Engineering (According to Websters): The application of math and science by which the properties of matter and the sources of energy. 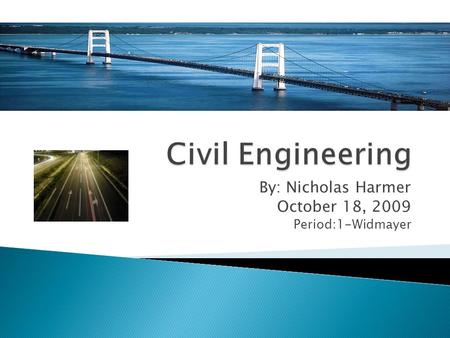 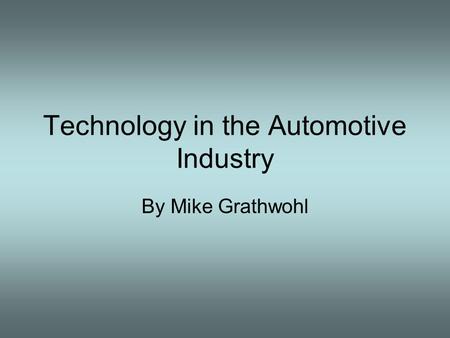 Technology in the Automotive Industry By Mike Grathwohl. 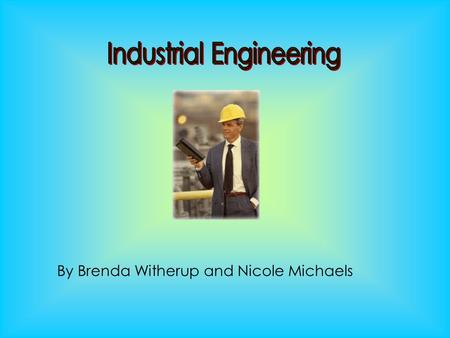 By Brenda Witherup and Nicole Michaels. Definition of Industrial Engineering: They find the most efficient and effective ways to make things. 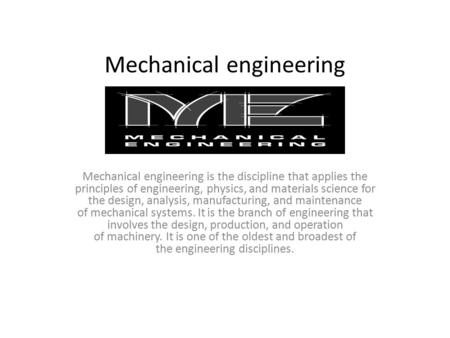 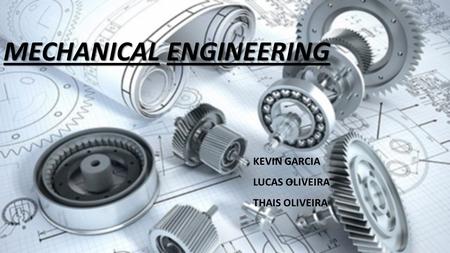 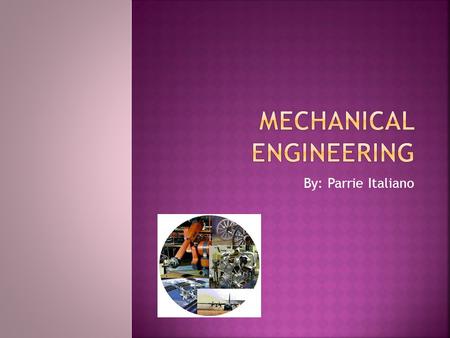 By: Parrie Italiano.  Mechanical Engineering is the design and development of basically everything that has to do with a machine. Ex: Cars, planes, rockets, 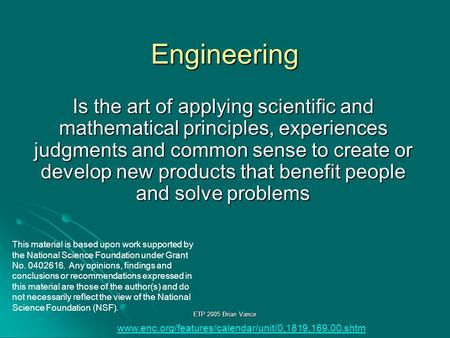 ETP 2005 Brian Vance Engineering Is the art of applying scientific and mathematical principles, experiences judgments and common sense to create or develop. 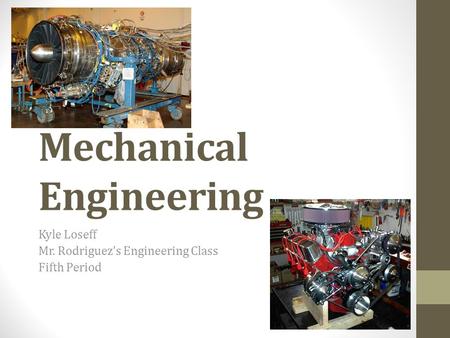 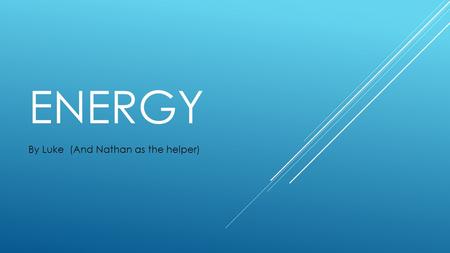 ENERGY By Luke (And Nathan as the helper). WHAT IS SCIENCE? Science is everything here are a few types of science Physics Biology Chemistry Geology Astronomy. 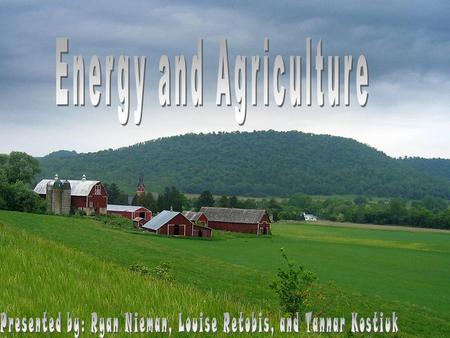 Introduction Energy resources in agriculture have evolved a lot over the years. We are constantly developing new greener energy sources that are beneficial. 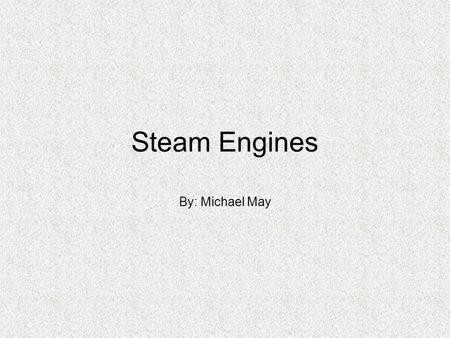 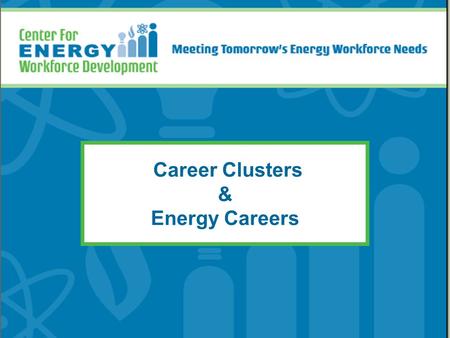