2 Primary sources A primary source is an original object or document; first-hand information. Primary source is material written or produced in the time period that you may be investigating. Primary sources enable the researcher to get as close as possible to what actually happened during an historical event or time period.    Destitute peapickers in California. Mother of seven children. Age thirty-two. Nipomo, California.Dorothea Lange March. Prints and Photographs Division. LC-USF C. Primary sources are original records created at the time historical events occurred or well after events in the form of memoirs and oral histories. Primary sources may include letters, manuscripts, diaries, journals, newspapers, speeches, interviews, memoirs, documents produced by government agencies such as Congress or the Office of the President, photographs, audio recordings, moving pictures or video recordings, research data, and objects or artifacts such as works of art or ancient roads, buildings, tools, and weapons. These sources serve as the raw material to interpret the past, and when they are used along with previous interpretations by historians, they provide the resources necessary for historical research

16 Sample Primary Source https://archive.org/details/Japanese1943
After viewing, talk about this as propaganda in next two slides

17 Why Use Primary Sources? Advantages
Primary sources provide a window into the past—unfiltered access to the record of artistic, social, scientific and political thought and achievement during the specific period under study, produced by people who lived during that period these unique, often profoundly personal, documents and objects can give a very real sense of what it was like to be alive during a long-past era.

18 Primary Source Disadvantages
Questions of creator bias, purpose, and point of view may challenge students’ assumptions. Primary sources are often incomplete and have little context. Students must use prior knowledge and work with multiple primary sources to find patterns In analyzing primary sources, students move from concrete observations and facts to questioning and making inferences about the materials.

19 Why Use Secondary Sources? Advantages
Secondary sources can provide analysis, synthesis, interpretation, or evaluation of the original information. Secondary sources are best for uncovering background or historical information about a topic and broadening your understanding of a topic by exposing you to others’ perspectives, interpretations, and conclusions Allows the reader to get expert views of events and often bring together multiple primary sources relevant to the subject matter

20 Secondary Source Disadvantages
Their reliability and validity are open to question, and often they do not provide exact information They do not represent first hand knowledge of a subject or event There are countless books, journals, magazine articles and web pages that attempt to interpret the past and finding good secondary sources can be an issue 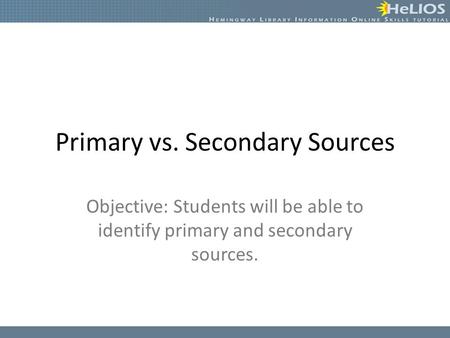 Primary vs. Secondary Sources Objective: Students will be able to identify primary and secondary sources.