5 Plessy v. Ferguson The Case: Homer Plessy, 1/8th black, was arrested for sitting in the “white car” of a Louisiana train in violation of that state’s “Separate Car Act” The case was appealed to Supreme Court

6 Supreme Court Ruling (1896)
The Ruling: Separate facilities were lawful as long as they were equal Only one dissenter, Justice John Harlan, wrote “Our Constitution is color blind.”

9 Booker T. Washington Born a slave in southwestern Virginia
Believed in vocational education for blacks Founded the Tuskegee Institute in Alabama Believed in gradual equality Accused of being an “Uncle Tom” Uncle Tom was the main character in Uncle Tom’s cabin Term came to mean one who was excessively subservient Wrote Up From Slavery (1901)

11 W.E.B. DuBois Born in 1868 in Massachusetts
First African American to received a Ph.D. from Harvard Wanted immediate quality between blacks and whites Wanted classical education for blacks Wrote The Souls of Black Folk (1903) Involved in the Niagara Movement, which led to the NAACP 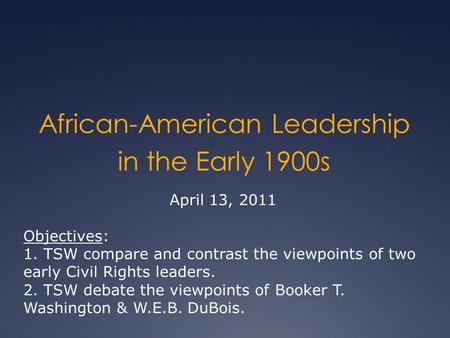 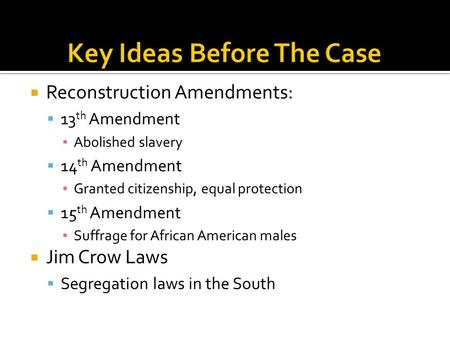