1 Atoms: Development of the Atomic Theory

3 Who are these men? In this lesson, we’ll learn about the men whose quests for knowledge about the fundamental nature of the universe helped define our views.

4 Democritus 460 BC - Greek philosopher proposes the existence of the atom He pounded materials until he made them into smaller and smaller parts He called them atoma which is Greek for “indivisible”. Berryman, S. (2010). Democritus. Retrieved from

5 Democritus His Theory: All atoms: Are small hard particles
Are made of a single material formed into different shapes and sizes Are always moving, and they form different materials by joining together Berryman, S. (2010). Democritus. Retrieved from

7 John Dalton His Theory:
All substances are made of atoms that cannot be created, divided, or destroyed. Atoms join with other atoms to make new substances. Atoms of the same element are exactly alike, and atoms of different elements are different in mass and size. De Leon, N. (n.d.). Dalton's atomic theory. Retrieved from

9 J.J. Thomson His Theory: Atoms contain negatively charged particles called electrons and positively charged matter. Created a model to describe the atom as a sphere filled with positive matter with negative particles mixed in Referred to it as the plum pudding model

13 Niels Bohr His Theory: Electrons travel around the nucleus in definite paths and fixed distances. Electrons can jump from one level to a path in another level.

15 Erwin Shrodinger His Theory:
The exact path of electrons cannot be predicted. The region referred to as the electron cloud, is an area where electrons can likely be found.

16 James Chadwick 1932 - English physicist; discovered neutrons
His Theory: Neutrons have no electrical charge. Neutrons have a mass nearly equal to the mass of a proton. Unit of measurement for subatomic particles is the atomic mass unit (amu).

50 Modern Theory of the Atom
Atoms are composed of three main subatomic particles: the electron, proton, and neutron. Most of the mass of the atom is concentrated in the nucleus of the atom.

51 Modern Theory of the Atom
The protons and neutrons are located within the nucleus, while the electrons exist outside of the nucleus. In stable atoms, the number of protons is equal to the number of electrons.

53 Modern Theory of the Atom
The sum of the number of protons and neutrons in a particular atom is called the atomic mass. Valence electrons are the outermost electrons. 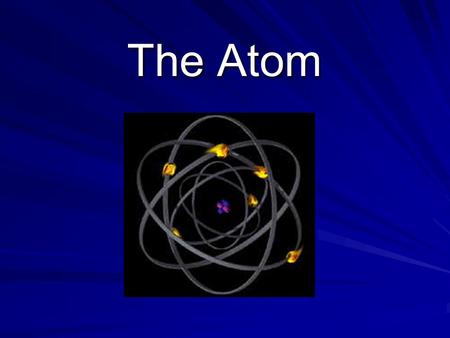 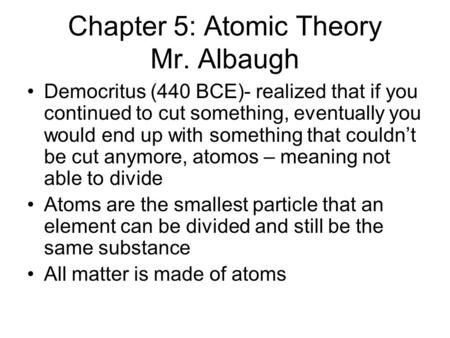