3 Definition Literal Equation – an equation with two or more variables.
You can "rewrite" a literal equation to isolate any one of the variables using inverse operations. This is called solving for a variable. When you rewrite literal equations, you may have to divide by a variable or variable expression. In this lesson, assume that the variable or variable expression is not equal to zero. Division by zero is not defined. Examples:

4 Solving a Literal Equation
Solving for a Variable Step 1 Locate the variable you are asked to solve for in the equation. Step 2 Identify the operations on this variable and the order in which they are applied. Step 3 Use inverse operations to undo operations and isolate the variable.

7 Your Turn: Solve for V VD = m Locate V in the equation.
Since m is divided by V, multiply both sides by V to undo the division. VD = m Since V is multiplied by D, divide both sides by D to undo the multiplication.

9 Definition Formula – is an equation that states a rule for a relationship among quantities. A formula is a type of literal equation. In the formula d = rt, d is isolated. You can "rearrange" a formula to isolate any variable by using inverse operations. Examples: Circumference: C = 2πr Area of Triangle: A = 1/2bh

11 Dividing by a fraction is the same as multiplying by the reciprocal.
Remember!

12 Example: Solving Formulas
The formula for a person’s typing speed is ,where s is speed in words per minute, w is number of words typed, e is number of errors, and m is number of minutes typing. Solve for e. Locate e in the equation. Since w–10e is divided by m, multiply both sides by m to undo the division. ms = w – 10e Since w is added to –10e, subtract w from both sides to undo the addition. –w –w ms – w = –10e

13 Example: Continued Since e is multiplied by –10, divide both sides by –10 to undo the multiplication.

15 Example: Application The formula C = d gives the circumference of a circle C in terms of diameter d. The circumference of a bowl is 18 inches. What is the bowl's diameter? Leave the symbol  in your answer. Locate d in the equation. Since d is multiplied by , divide both sides by  to undo the multiplication. Now use this formula and the information given in the problem.

17 Your Turn: d = rt Van Dyk’s time was about 1.46 hrs.
Solve the formula d = rt for t. Find the time in hours that it would take Ernst Van Dyk to travel 26.2 miles if his average speed was 18 miles per hour. d = rt Locate t in the equation. Since t is multiplied by r, divide both sides by r to undo the multiplication. Now use this formula and the information given in the problem. Van Dyk’s time was about 1.46 hrs. 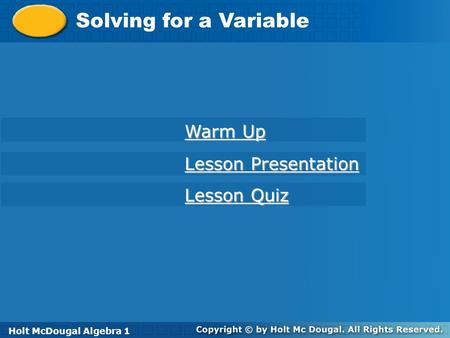 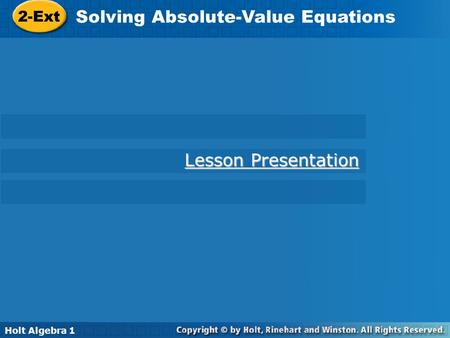 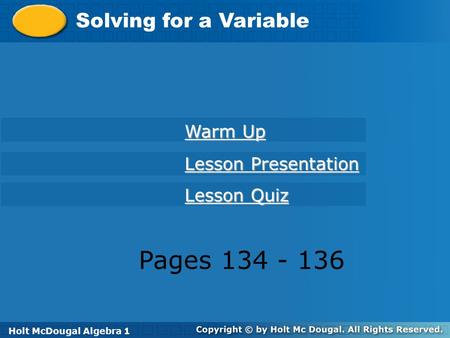 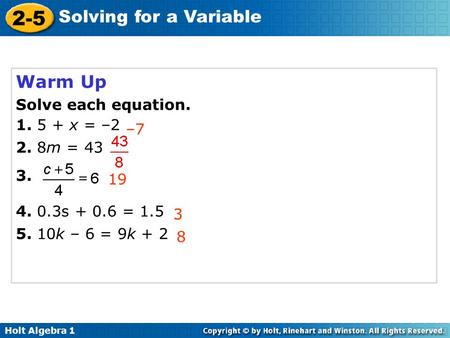 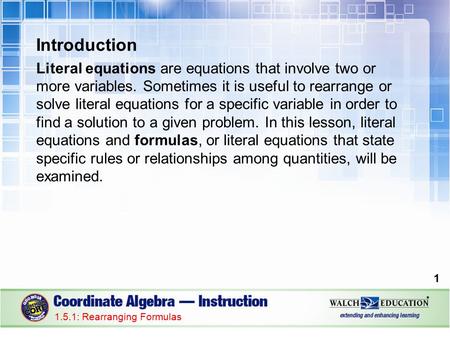 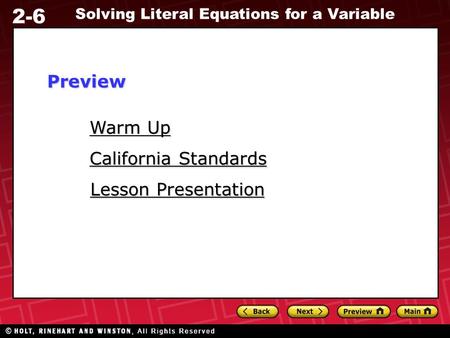 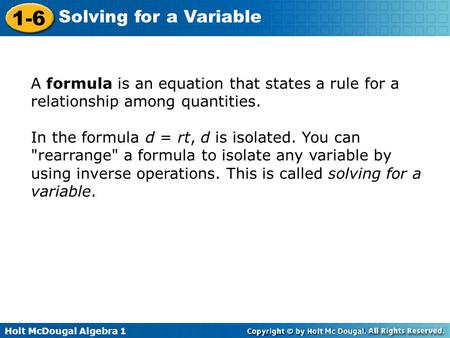 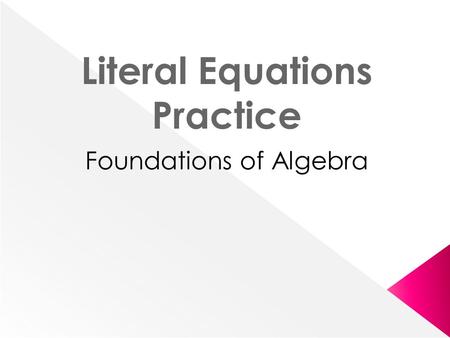 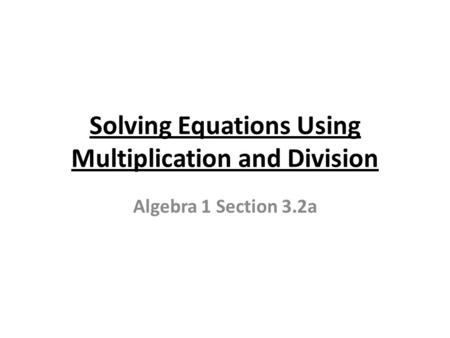 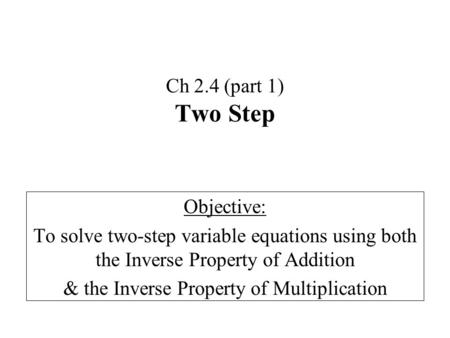 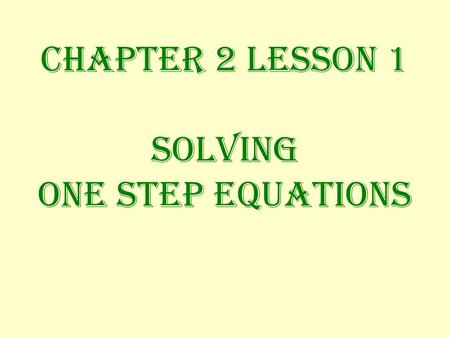 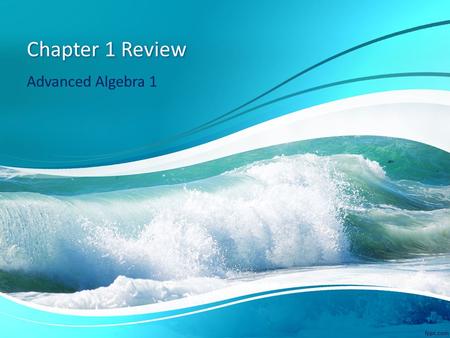 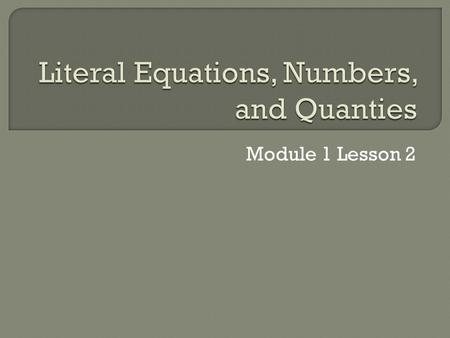 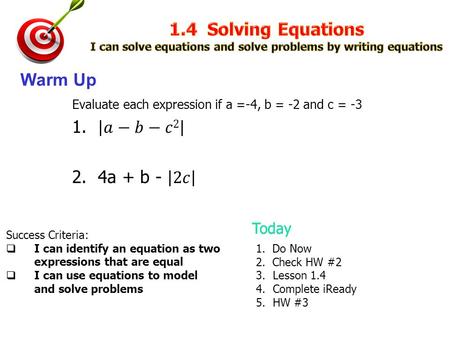 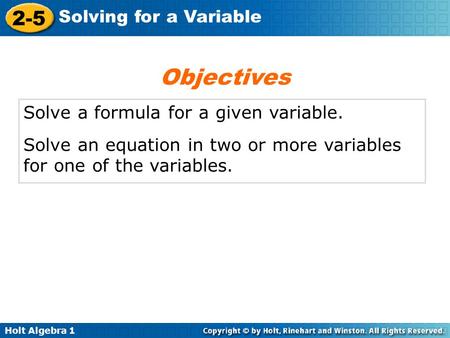 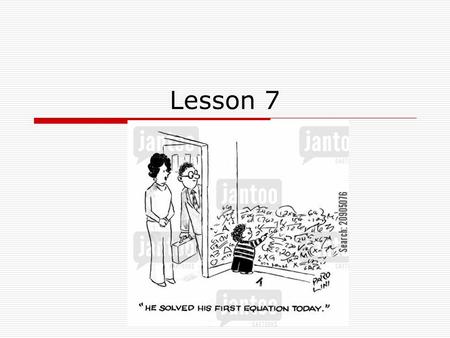 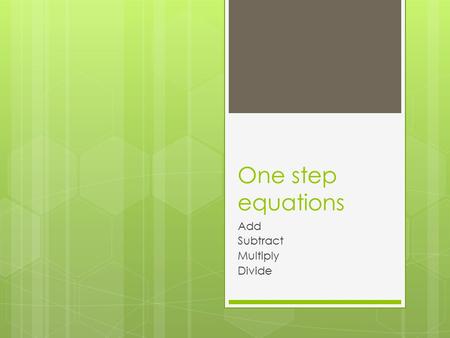 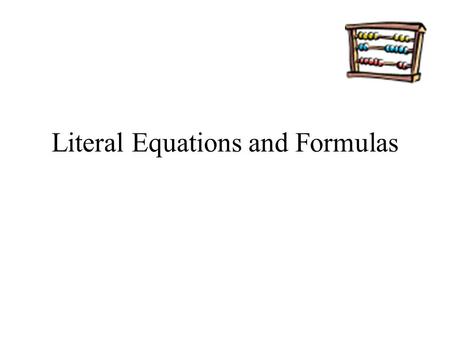 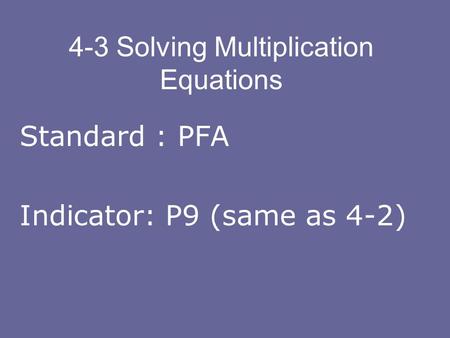 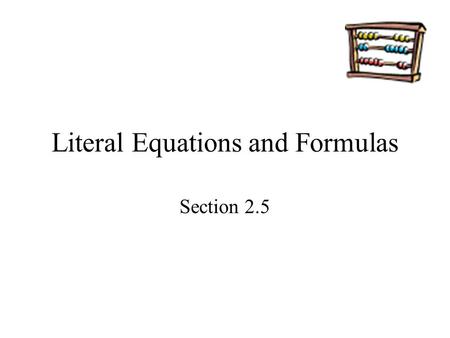