Presentation on theme: "Nutrients Cycle Nutrients and Matter are continually used in an ecosystem over and over again."— Presentation transcript:

1 Nutrients Cycle Nutrients and Matter are continually used in an ecosystem over and over again.

2 Energy flows in one direction, but matter recycles

11 Carbon Cycle Main Concepts
Carbon enters the atmosphere through fossil fuel release, release of carbon dioxide through cellular respiration, and waste of decaying matter Carbon is then used by plants to carry out photosynthesis Dead plants and animals return back into the ground which returns carbon back to Earth. Coal and oil also have carbon which allow carbon to always be present in the Earth

16 Nitrogen Cycle Main Concepts
Nitrogen is present in the atmosphere as a natural component of air due to volcanic activity, lightning, release by algae (78%) Nitrogen is present in the soil, but must be FIXED through nitrogen fixation (denitrification, and ammonification) in order to be released into the atmosphere Nitrogen fixing bacteria allow nitrogen to be altered in the Earth so that it is taken up in plant root systems (assimilation). When organisms eat plants, the nitrogen is taken in by them and can be release back into the Earth through waste products

21 Phosphorus Cycle Path Two- Animals
Phosphorus is locked in soil and is taken in by plant root systems Animals eat plants and take in the phosphorus When animals die, detritivores (worms) break down dead matter and release the phosphorus back into the soil. Can be used again or leached back into water systems

Download ppt "Nutrients Cycle Nutrients and Matter are continually used in an ecosystem over and over again." 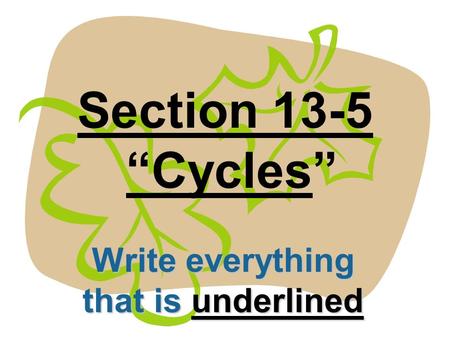