3 CHARACTER Characters are the people, animals or imaginary creatures that are presented in a story. Depending on the type of text, characters can either be fictional (made up) or real individuals.

5 Terms to Know Indirect Characterization: shows things that reveal the personality of a character. Example Atticus from To Kill a Mockingbird: “I wanted you to see what real courage is, instead of getting the idea that courage is a man with a gun in his hand. It's when you know you're licked before you begin, but you begin anyway and see it through no matter what. What assumptions can you make about Atticus’ personality, values, beliefs through the indirect characterization?

7 CHARACTER TYPES 1) Static: characters do not change throughout a story, regardless of conflict or interaction with other characters. A static character usually has a minor role. 2) Flat: characters are not fully developed through characterization and lack detail. This character type is notable for one kind of personality trait or characteristic. Ie. ‘the mean older brother’

8 CHARACTER TYPES 3) Dynamic: characters are likely to change their temperament/ personality throughout a story, especially after conflict or interactions with other characters. Dynamic characters usually have a major role. 4) Round: characters are portrayed with complex details, and have a multidimensional personality. We know their thoughts, their physical description, motives, desires, ambitions etc.

9 A character often becomes round and dynamic when the reader knows:
What they look like How they act What they say Who they are with What they think What others think about them Why they act the way they do

10 CHARACTER TYPES 5) Foil: a character that is used to enhance another character through contrast. Who is a dynamic, flat, static, round or foil character? Explain your ideas.

12 PARTS OF PLOT Introduction -Occurs at the beginning of the story
-Introduces character, setting, time period, etc. Rising Action: -Several events that lead up to the Climax. -Helps build suspense

15 PLOT GRAPHS Why make a plot Graph?
It helps you to utilize your reading strategies. It will help you to create an accurate summary later on! It will help you to synthesize your ideas! Blank plot graphs are located on our class website: msepatterson.weebly.com

16 OTHER TERMS TO KNOW Topic: What the story/article is about
Example: Love Theme: The message the author is conveying (not one word) Example: Love can help us overcome obstacles Genre: The type of story (sci-fi, mystery, romance, etc.) Atmosphere: the overall mood of the story that is established by many elements. (It was a dark and gloomy night vs It was night time.)

17 OTHER TERMS TO KNOW Literary Devices are often used in writing to enhance the interest of the piece and to help the audience understand. Simile: A comparison using like or as. Example: He is as strong as a bull Metaphor: A comparison that does not use like or as Personification: giving inanimate objects human qualities Point of View: the perspective from which a story is told (first person, third person objective, omniscient limited or omniscient)

18 OTHER TERMS TO KNOW Hyperbole: An exaggeration for effect.
Diction: Word Choice Imagery: Word Pictures Setting: the physical location, time and environment in which the story takes place Descriptive Language: Created through using adjectives and adverbs.

19 “The Lottery” Anticipation Guide
Crimes are more likely to happen in a big city than a small town. Agree or Disagree? I would go along with “tradition” even though it goes against what I believe personally.

20 “The Lottery” Anticipation Guide
When someone in authority tells me to do something, I obey without question. Agree or Disagree? Given no other option, I would sacrifice one human life if it meant saving many others.

21 “The Lottery” Anticipation Guide
When I hear of something bad happening to someone else, I’m secretly relieved that it’s not happening to me. Agree or Disagree? I sometimes allow others to take the blame for something I’ve done wrong. 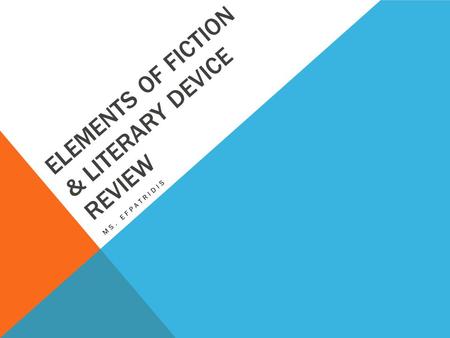 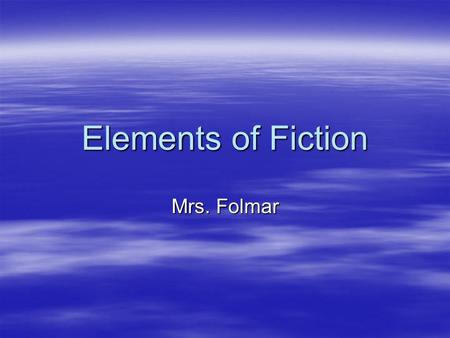