4 BUT early gene mapping showed individuals with only long arm of the Y had HY but were female, whereas patients with the short arm had no HY but were male.

5 The SRY Gene "positional cloning" David Page et al at MIT; used patients from infertility clinics (no sperm) These were males, genetically XX with a tiny piece of short arm of Y translocated onto one of X chromosomes

8 It was found by studying a human XY female. It turned out that she had a deletion in the Y chromosome that did not allow testis development. Deletion Hydridization

10 1) XY patients who are female have mutations in the SRY region. 2) A mutant line of mice with XY females has deletion of corresponding Sry gene. Evidence

12 In every Olympics since sex testing was initiated, several women have been disqualified because they were identified as XY.

13 In 1990, Sinclair and colleagues narrowed the region to a 35,000 base-pair domain of the small arm of the Y chromosome. http://zygote.swarthmore.edu/sex2.html

14 SRY includes a single exon that acts as a transcription factor…..a protein product recognizes and binds specifically to the DNA sequence: AACAAT

15 Four siblings with testicular feminization syndrome. All four subjects in this photograph have 44 autosomes plus an X and a Y, (so they are genotypically MALES (!)) but they have inherited the recessive sex-linked allele conferring insensitivity to androgens (male hormones). http://www.cbs.dtu.dk/dave/roanoke/bio101ch15.htm

16 3) Experiment -take fertilized mouse embryos, mixture of XX and XY, inject with many copies of cloned and purified mouse Sry gene. -implant embryos back in mothers. -gene will be incorporated into genome and expressed in some but not all baby mice, -produced 2 XX male mice. These were Sry transgenic but also sterile (because lacked other missing Y genes.)

17 SRY, the master switch for male development in early embryogenesis.

21 The protein product of the SRY gene binds to DNA and in doing so distorts it dramatically out of shape. This alters the properties of the DNA and likely alters the expression of a number of genes, leading to testis formation.

22 SRY mutations give rise to XY females with gonadal dysgenesis. Translocations of part of the Y chromosome containing SRY give rise to XX males.

23 In addition to SRY, the DMRT1 gene on chromosome 9 is involved in determining testis development. And unlike the SRY gene, it has to be present in two copies to work properly. XY humans who have lost one copy of the gene fail to develop testes and show sex-reversal, despite having a functional SRY gene.

26 In females one of the X-chromosomes is inactivated in every cell. The process is called Lyonization after Mary Lyon who discovered it. Inactivation occurs during embryogenesis. The process starts at the "X inactivation center" and spreads along the chromosome. X Inactivation appears to be random in somatic cells. (mosaic pattern)

27 XIST is located within the "X inactivation center" and only expressed by the inactive X chromosome. XIST is transcribed but not translated. It appears to act as RNA by binding to the x chromosome and promoting its movement to the nuclear periphery. Methylation of the inactive X genes maintains inactivity.

28 Evolutionary studies have shown that the Y was once the homologous pair for X. The y chromosome contains mainly degraded copies of X linked genes and large regions of repeated sequences. 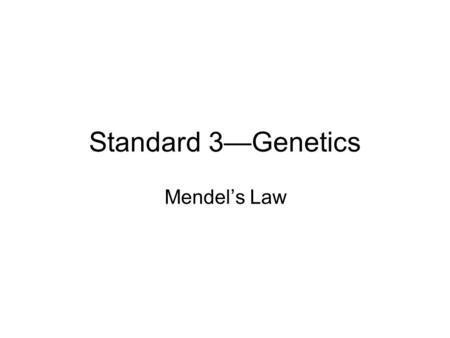 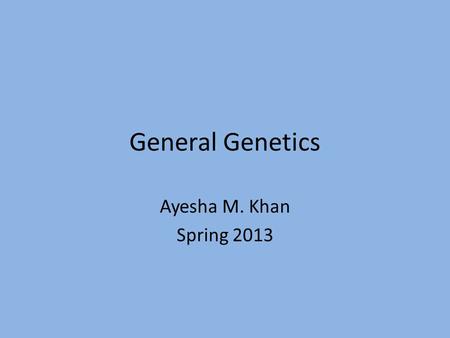 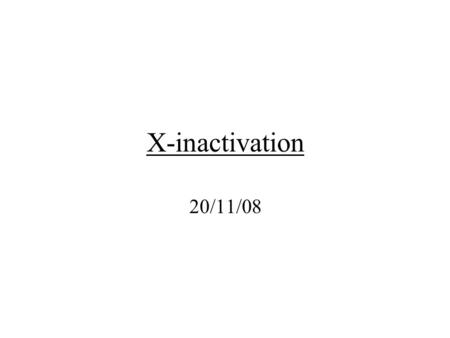 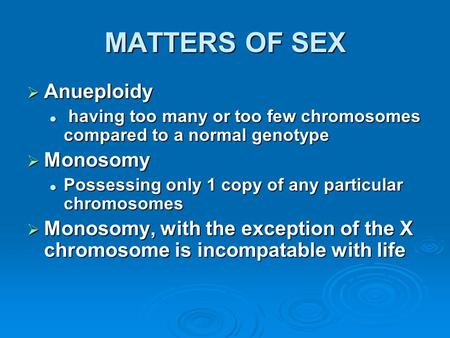 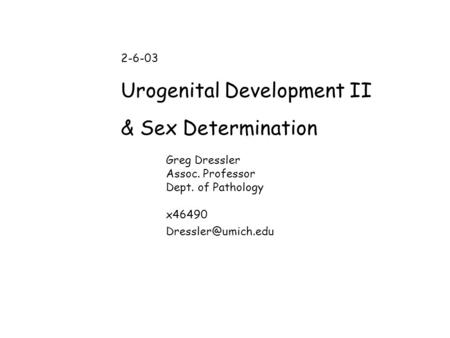 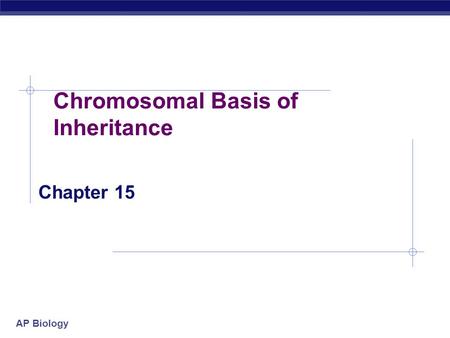 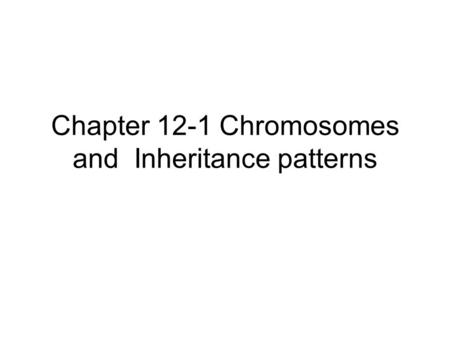 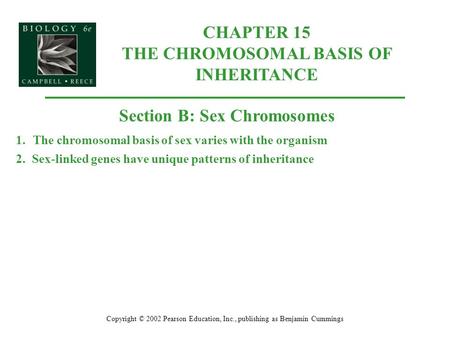 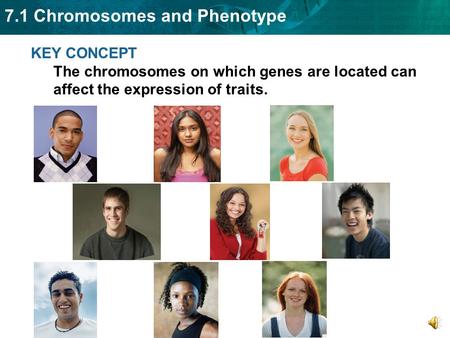 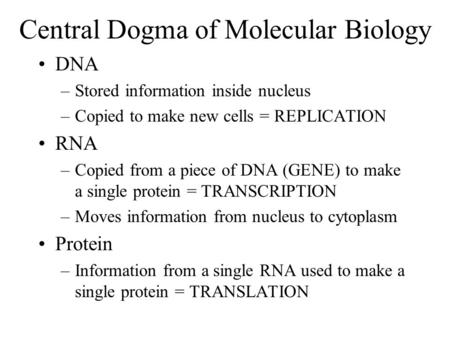 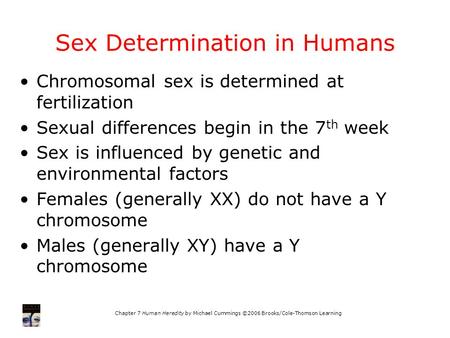 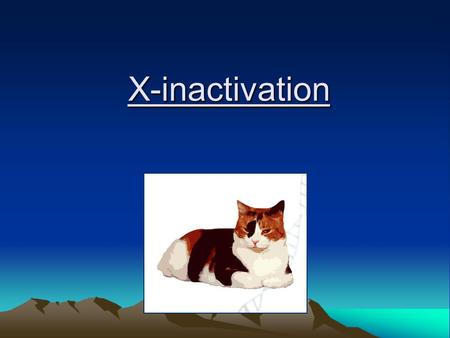 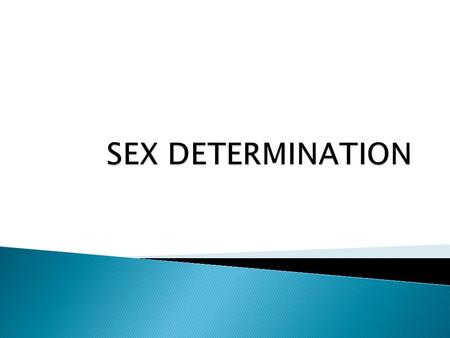 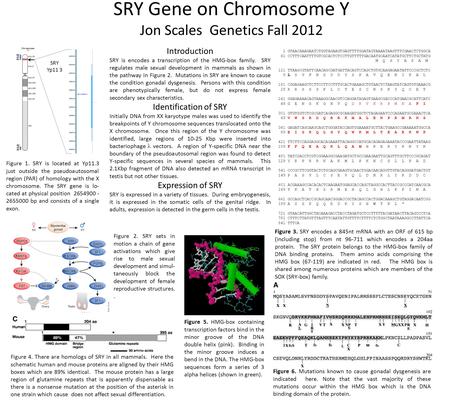